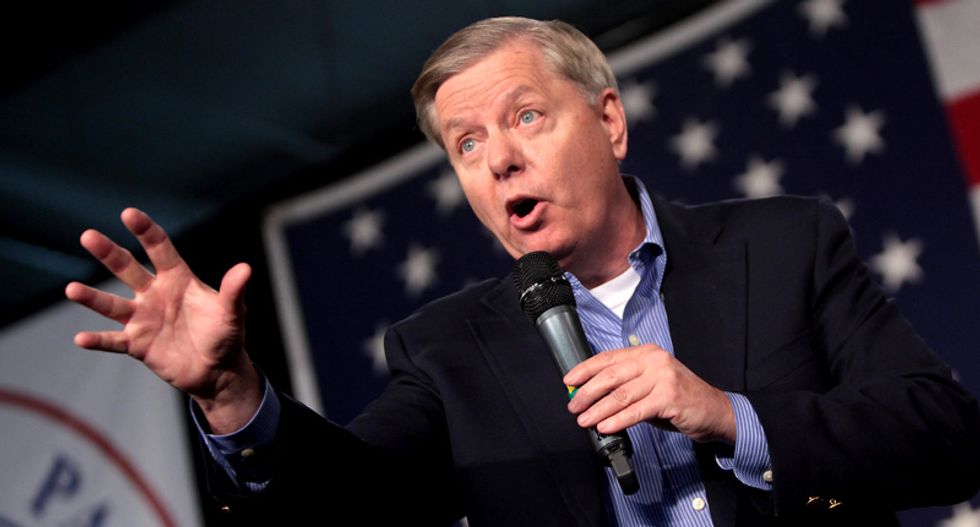 American presidents are only as strong as their parties allow them to be. So we should all be paying close attention to what the Republicans, especially Republicans in the US Senate, are saying about Donald Trump’s betrayal of the Kurds over the weekend.

The GOP is already on its heels defending his indefensible extortion of Ukraine’s government. The calls for impeachment are getting louder and shriller. Will humiliating a party keenly sensitive to military matters be a step too far? We’ll see.

Most elected Republicans are publicly sticking with the president amid the Democrats’ coming impeachment inquiry, but a small group, in both chambers of the US Congress, is getting pulled in two polar directions: between loyalty to Trump and loyalty to country. That group may get bigger or smaller depending on circumstances, but even those weathering the impeachment storm must be unhappy about having to deal with a commander-in-chief who’s acting neither as commander nor a chief.

As we saw with Ukraine, foreign policy and national security have a special salience among Republicans and Democrats in swing districts. From the looks of things, Trump made a snap decision Sunday, blindsiding not only the GOP but the Pentagon. What’s certain is that he betrayed our allies, undermined our standing in the world, potentially harmed our own safety, and as a result, many of the Kurds are going to die.

“A precipitous withdrawal of U.S. forces from Syria would only benefit Russia, Iran, and the Assad regime,” Republican Senate Majority Leader Mitch McConnell said. “And it would increase the risk that ISIS and other terrorist groups regroup.”

US Senator Lindsey Graham was stunned, too. According to The Bulwark, the foreign policy hawk “warned that betraying the Kurds would force them to align with the Assad regime and Iran, and would ensure the comeback of ISIS. It would be, he tweeted, ‘a stain on America’s honor,’ and a virtual surrender to the terrorists.

The White House announced Sunday that US forces were pulling out of northern Syria, clearing the way of Turkey to wipe out the Kurds there. (The Turks have been more or less at war with the Kurds for years; the only thing stopping them from taking action was US strength and resolve.) The Kurds, a Middle East ethnic minority, have been our allies since at least 2003 when we invaded Iraq. “Kurdistan,” in northern Iraq, has been that country’s most stable region since the Hussein regime fell. The Kurds have also been central in the US fight in Iraq and Syria against the Islamic State (ISIS), which rose to prominence as a result of Iraq sinking into chaos. Whatever progress has been made against terrorism, the Kurds have been key. And no one disputes this.

It’s still unclear what happened Sunday, and there’s a lot of information swirling around. Newsweek, citing an unnamed member of the National Security Council, reported Monday that Recep Tayyip Erdogan, Turkey’s autocratic president, had already made and announced a decision to invade northern Syria by the time Trump called. That phone call, the source said, was scheduled as a result of Erdogan’s announcement. I haven’t yet seen confirmation of Newsweek’s reporting but the timing sounds about right to me. By Monday evening, the Jerusalem Post and others reported that Turkish warplanes were already bombing Kurdish forces in Iraq and Syria.

Some say Trump caved to Erdogan because of his Istanbul properties. There may be something to that. This is a president quick to self-deal. But if I were to guess, Erdogan told Trump this is happening, like it or not, and Trump announced his “decision” to pull out so it didn’t look like he was being pushed around a minor regional power. To put this another way, the president’s betrayal may be the direct result of his being a fundamentally weak president. Newsweek’s source points to just that:

President Trump was definitely out-negotiated and only endorsed the troop withdraw to make it look like we are getting something—but we are not getting something. The U.S. national security has entered a state of increased danger for decades to come because the president has no spine and that's the bottom line.

As if to underscore the point, the president tweeted Monday that if Ankara does anything “off limits,” the US would “totally destroy and obliterate” Turkey’s economy. Turkey’s vice president responded obliquely in a speech Monday: “When it comes to the security of Turkey, as always, our president emphasized Turkey will determine its own path.” If that sounds like a snub, that’s because it’s a snub. We can charitably interpret Trump’s “warning,” I think, as coming from an old man yelling at a cloud.

I wrote in June that Iran shot down a US spy drone safe in the knowledge that our president is so weak that he would not retaliate in any way Iran couldn’t handle. Who, I asked, will be the next to bloody Trump’s nose? Well, turns out, it’s Turkey.

There’s more here than humiliation at stake—as I said, human lives are on the line—but humiliation is a social force that animates the Republicans. It seems doubtful they can and will tolerate too much. Will that put them in line with pro-impeachment factions? No idea. But it takes just one more straw to break a camel back, right?