Exomoons orbiting an exoplanet outside our solar system. Dotted Yeti/Shutterstock.com

What is the difference between a planet-satellite system as we have with the Earth and Moon, versus a binary planet – two planets orbiting each other in a cosmic do-si-do?

I am an astronomer interested in planets orbiting nearby stars, and gas giants – Jupiter, Saturn, Uranus and Neptune in our solar system – are the largest and easiest planets to detect. The crushing pressure within their gassy atmosphere means they are unlikely to be hospitable to life. But the rocky moons orbiting such planets could have conditions that are more welcoming. Last year, astronomers discovered a planet-sized exomoon orbiting another gas giant planet outside our solar system.

In a new paper, I argue that this exomoon is really what is called a captured planet.

Is the first detected ‘exomoon’ really a moon?

True Earth analogues, that orbit Sun-like stars, are very hard to detect, even with the large Keck telescopes. The task is easier if the host star is less massive. But then the planet has to be closer to the star to be warm enough, and the star’s gravitational tides may trap the planet in a state with a permanent hot side and a permanent cold side. This makes such planets less attractive as a potential location that could harbor life. When gas giants orbiting Sun-like stars have rocky moons, these may be more likely places to find life.

In 2018, two astronomers from Columbia University reported the first tentative observation of an exomoon – a satellite orbiting a planet that itself orbits another star. One curious feature was that this exomoon Kepler-1625b-i was much more massive than any moon found in our solar system. It has a mass similar to Neptune and orbits a planet similar in size to Jupiter.

Astronomers expect moons of planets like Jupiter and Saturn to have masses only a few percent of Earth. But this new exomoon was almost a thousand times larger than the corresponding bodies of our solar system – moons like Ganymede and Titan which orbit Jupiter and Saturn, respectively. It is very difficult to explain the formation of such a large satellite using current models of moon formation.

In a new model I developed, I discuss how such a massive exomoon forms through a different process, wherein it is really a captured planet.

All planets, large and small, start by gathering together asteroid-sized bodies to make a rocky core. At this early stage in the evolution of a planetary system, the rocky cores are still surrounded by a gaseous disk left over from the formation of the parent star. If a core can grow fast enough to reach a mass equivalent to 10 Earths, then it will have the gravitational strength to pull gas in from the surrounding space and grow to the massive size of Jupiter and Saturn. However, this gaseous accumulation is short-lived, as the star is draining away most of the gas in the disk, the dust and gas surrounding a newly formed star.

If there are two cores growing in close proximity, then they compete to capture rock and gas. If one core gets slightly larger, it gains an advantage and can capture the bulk of the gas in the neighborhood for itself. This leaves the second body without any further gas to capture. The increased gravitational pull of its neighbor drags the smaller body into the role of a satellite, albeit a very large one. The former planet is left as a super-sized moon, orbiting the planet that beat it out in the race to capture gas.

A remnant core as a look back into history

Viewed in this context, the captured planet is unlikely to be habitable. Growing planetary cores have gaseous envelopes, which make them more like Uranus and Neptune – a mix of rocks, ice and gas that would have become a Jupiter if it had not been so rudely cut off by its larger neighbor.

However, there are other implications that are almost as interesting. Studying the cores of giant planets is very difficult, because they are buried under several hundred Earth masses of hydrogen and helium. Currently, the JUNO mission is attempting to do this for Jupiter. However, studying the properties of this exomoon may enable astronomers to see the naked core of a giant gaseous planet when it is stripped of its gaseous envelope. This can provide a snapshot of what Jupiter may have looked like before it grew to its current enormous size.

This exomoon system Kepler-1625b-i is right at the edge of what is detectable with current technology. There may be many more objects like this that could be uncovered with future improvements in telescope capabilities. As astronomers’ census of exoplanets continues to grow, systems like the exomoon and its host highlight an issue that will become more important as we go forward. This exomoon reveals that the properties of a planet are not solely a consequence of its mass and position, but can depend on its history and the environment in which it formed. 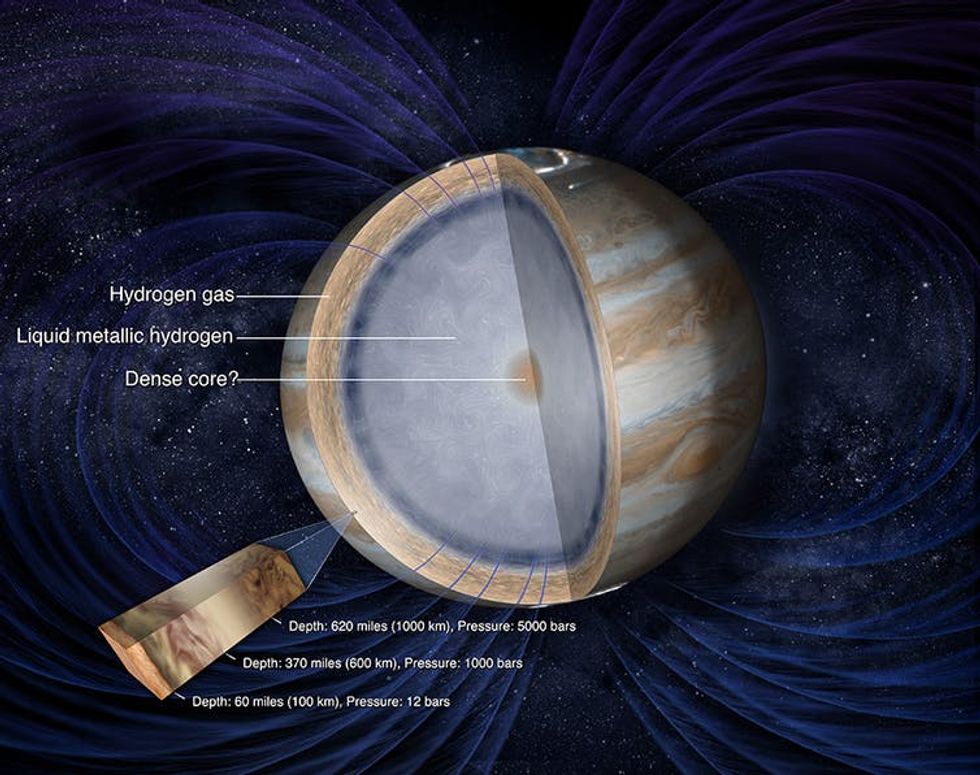 Exomoons may reveal secrets about how gas giants like Jupiter formed and what is in their core.