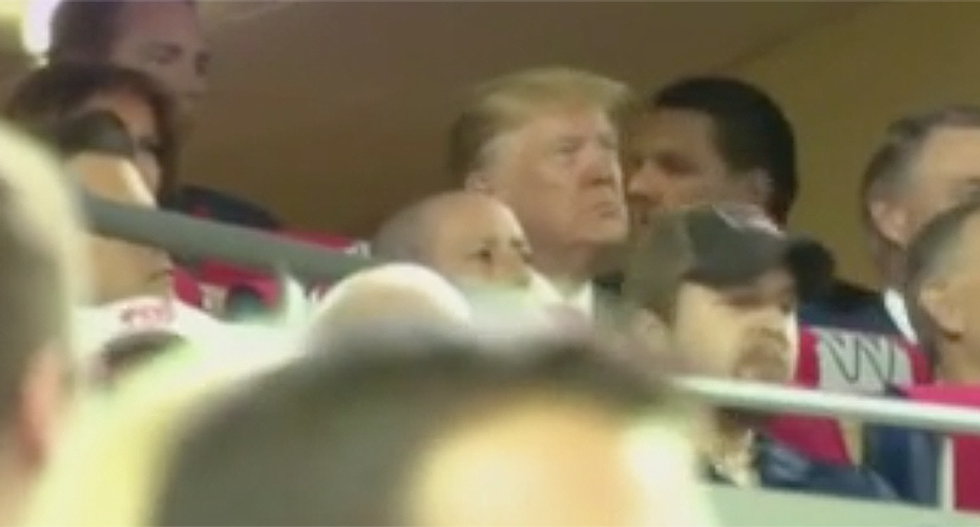 Washington Nationals fans were eager to boo President Donald Trump as he entered the stadium for Game 5 of the World Series Sunday. While Trump brought a "big crew" of Republican officials with him, he said he was bringing wounded veterans with him. Some online noted it was probably a ploy to protect himself.

Bloomberg News reporter Jennifer Jacobs posted a photo of the president arriving to his box in section 119 at the stadium as well as photos of him arriving with other Republican officials.

Trump motorcade is on the way the way to Nationals Stadium for Game 5 of the World Series. Big crew of POTUS friend… https://t.co/6Xsuh8F6yz
— Jennifer Jacobs (@Jennifer Jacobs) 1572220500.0

The booing was anticipated because, as one Twitter user pointed out, the stadium holds more people than voted for Trump in Washington, DC in 2016.

But because Trump wasn't announced and came in after the National Anthem and the first pitch, Nats fans hardly noticed, Jacobs tweeted. Those who did see him booed and a few cheered.

Trump wasn’t announced on the loudspeakers when he arrived at Nats game. Fans barely noticed. He got a boos-clap… https://t.co/BRlnB7VHyn
— Jennifer Jacobs (@Jennifer Jacobs) 1572222560.0

One DC and UMD sports fan tweeted that he anticipated they wouldn't announce Trump at the game so there wouldn't be an opportunity for the large crowd to boo the president.

Either the stadium will never announce trump so he won’t get booed or the fox broadcast will be away when crowd boo… https://t.co/zf4praChx5
— Emperor Grunfeld (@Emperor Grunfeld) 1572221541.0

You can see the other responses from Twitter below:

@arden_messing @TheDarkness24 Is Trump really going to the ballgame? He will be booed. This is not one of his Klan rallies.
— Beatrice Hazelett (@Beatrice Hazelett) 1572220144.0

People are expecting Trump to be loudly booed at the game tonight, but how rich do you have to be to have World Ser… https://t.co/nX9ANlPkdE
— Colleen McKenna (@Colleen McKenna) 1572219235.0

A Chinese scientist involved in the first instance of editing babies' genes admits he moved "too quickly" with the unprecedented procedure.

He Jiankui was fired by his university in Shenzhen, found guilty of conducting "illegal medical procedures" and sentenced to three years in prison after announcing in 20218 that he had edited the genes of twin girls Lulu and Nana before their birth, but he stopped short of expressing regrets in an interview with The Guardian.

Protecting 30 percent of oceans a huge challenge for the planet

How do we go from protecting eight percent of marine areas to 30 percent in less than 10 years? This question is at the heart of a global forum in Canada this weekend aiming to save marine ecosystems under threat from overfishing, pollution and climate change.

On the heels of the historic biodiversity agreement signed at COP15 in Montreal late last year, about 3,000 officials, scientists, NGOs and Indigenous groups are meeting in Vancouver for the fifth International Marine Protected Areas Congress (IMPAC5), which opened Friday and runs until February 9.

Cut the salt, cut the sugar, but you can keep the chocolate milk.