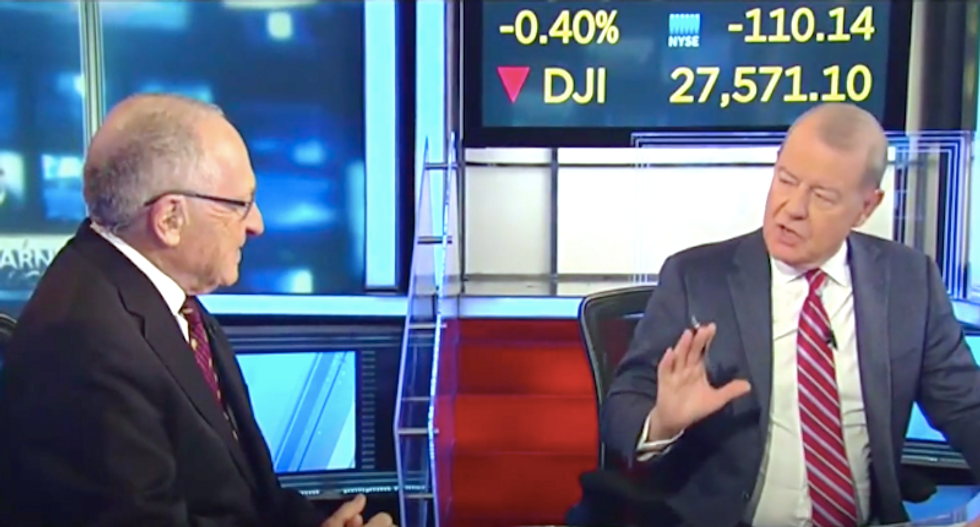 Attorney Alan Dershowitz was scolded on live television by a Fox Business host after slurring his rape accuser.

The Harvard law professor appeared Monday morning on Stuart Varney's program to discuss the latest developments in his ongoing legal dispute with Virginia Roberts Giuffre, who claims pedophile Jeffrey Epstein provided her to Dershowitz for sex when she was a teenager, reported The Daily Beast.

Dershowitz, who had been one of Epstein's attorneys, has sued Giuffre and her attorney David Boies for defamation, after the woman sued the law professor, and now Boies hit Dershowitz with a countersuit accusing him of inventing a fake extortion plot.

Varney called out Dershowitz, and asked him not to talk about others in such strong terms.

"I don’t want to be using words like that on this program, on someone who is not here to defend themselves,” Varney said.

Dershowtiz apologized, and then challenged Varney to invite his accuser and his lawyer onto the show for a debate.

“The point is, I’ve been falsely accused," Dershowitz said, "and I’m going to keep saying that till the day I die, and when I die, my wife and my children will say it. I am totally innocent, I will not sit silently by and allow myself to be accused.”