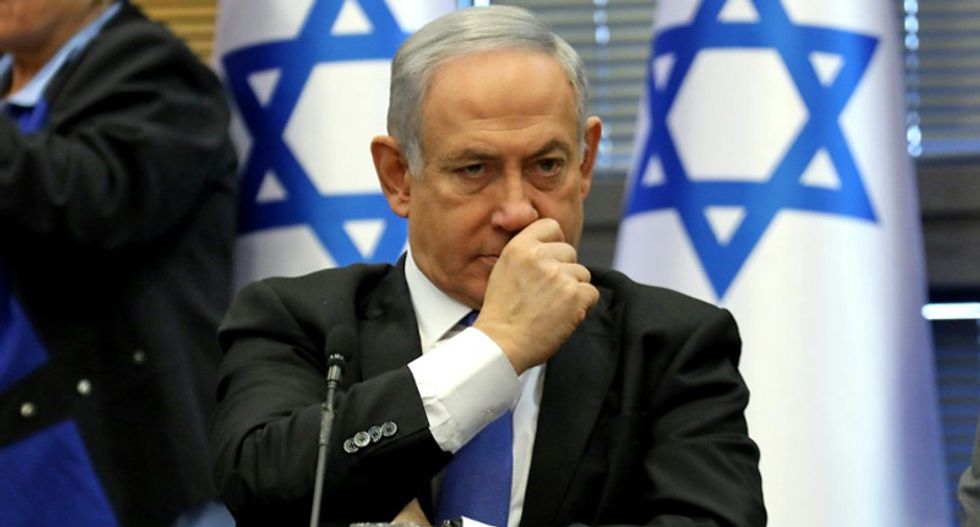 Israel's Benjamin Netanyahu on Thursday became the country's first prime minister to be indicted in office, on corruption charges, but defiantly condemned the "coup" against him and vowed to hold onto power.

The shock announcement compounded the political chaos gripping Israel which has been without a government for months and faces the prospect of a third election within one year.

After months of suspense, Netanyahu, Israel's longest-serving premier, was charged with bribery, fraud and breach of trust by Attorney General Avichai Mandelblit.

Netanyahu immediately hit back with an often vitriolic 15-minute speech, accusing the judiciary, police and others of plotting against him with "false" and "politically motivated" allegations.

"What is going on here is an attempt to stage a coup against the prime minister," he charged in a televised speech.

"The object of the investigations was to oust the right from government."

He vowed to continue on as interim prime minister despite potential court dates and intense political pressure.

"I will continue to lead this country, according to the letter of the law," he said.

The 70-year-old, who is nicknamed "Mr Security" and "King Bibi", has been in power since 2009 and dominates the country's political scene.

The indictment comes as crunch talks are due over forming a government, after two inconclusive general elections have left the country's political system deadlocked.

Netanyahu is not legally required to resign until he is convicted and all appeals are exhausted, but political pressure is likely to be intense.

He may now ask the Israeli parliament, or Knesset, to grant him immunity from prosecution.

The charges Netanyahu range from receiving gifts worth thousands of dollars to a deal to change regulatory frameworks in favour of a media group in exchange for positive coverage.

Mandelblit said it was a "hard and sad day" for Israeli to indict a leader but showed no citizen was above the law.

"The citizens of Israel, all of us, and myself, look up to the elected officials, and first and foremost -- to the prime minister," Mandelblit said.

On a day of high political drama, dozens of Netanyahu supporters gathered outside his official residency, many holding up pictures of the PM and slogans attacking Mandelblit.

A perennial fighter, Netanyahu has outlived many political rivals and Hugh Lovatt, Israel-Palestine analyst at the European Council on Foreign Relations, said he wouldn't give up power easily.

"Now more than ever Netanyahu will be fighting for his political and personal life," he said.

Of the three cases against Netanyahu, the third, known as Case 4,000, is seen as the most serious and carries the bribery, fraud and breach of trust charges.

He is alleged to have negotiated with Shaul Elovitch, the controlling shareholder of Israeli telecommunications giant Bezeq, to get positive coverage on his Walla! news site in exchange for policies benefiting Bezeq.

Elovitch and his wife were also indicted.

Case 1,000 involves allegations Netanyahu and his family received gifts including luxury cigars, champagne and jewellery from wealthy individuals, estimated to be worth more than 700,000 shekels ($200,000, 185,000 euros), in exchange for financial or personal favours.

Another case, known as Case 2000, concerns allegations Netanyahu sought a deal with the owner of the Yediot Aharonot newspaper that would have seen it give him more favourable coverage.

The next steps in the process remain unclear, with no date yet set for the trial.

They were set to only deepen the political turmoil in Israel, which has been without a stable majority government for nearly a year.

Neither Likud leader Netanyahu nor rival Benny Gantz, head of the centrist Blue and White party, have been able to form a coalition government following deadlocked elections in April and September.

Netanyahu has remained prime minister in an interim capacity.

The Knesset has 21 days remaining to find a candidate capable who can command the support of the majority of the country's 120 MPs and the indictment is likely to strengthen former army chief Gantz's claims.

Gantz has reportedly tried to woo MP's from Netanyahu's Likud to join him in a broad national unity government, but there have so far been no takers.

Gantz said Thursday evening the indictment of a sitting leader was a "very sad day for the State of Israel".