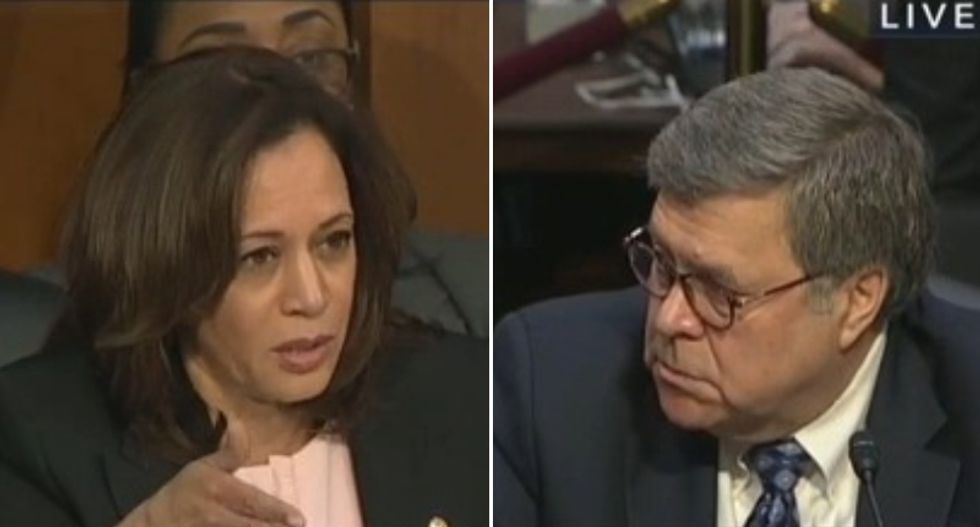 Harris, a career prosecutor who served as San Francisco District Attorney and California Attorney General, asked Barr if the White House had ever asked for any specific investigations.

Barr struggled to answer the question.

Senator Harris: Attorney General Barr has the President or anyone at the White House ever asked or suggested that you open an investigation of anyone?

Senator Harris: Yes or No?

Attorney General Han: Could you … could you repeat that question?

Senator Harris: I will repeat it. Has the President or anyone at the White House ever asked or suggested that you open an investigation of anyone? Yes or no please, sir.

Attorney General Barr: Urn, the President or anybody…

Senator Harris: Seems you would remember something like that and be able to tell us.

Attorney General Barr Yeah, but I’m. I’m trying to grapple with the word ‘suggest.’ I mean, there have been discussions of, of matters out there that. uh- – they have not asked me to open an investigation. But…

The line of questioning by Harris has taken on new life after the AG was implicated in the Ukraine scandal.

"On Tuesday, the Democrats—Sens. Kamala Harris (D-CA), Sheldon Whitehouse (D-RI), and Richard Blumenthal (D-CT)—sent a letter to the Department of Justice’s Inspector General, Michael Horowitz, asking him to investigate whether Barr was pushed by President Trump or anyone in the White House to open investigations into U.S. political figures like the Bidens," Politico reported Tuesday.

"The request has its roots in Barr’s appearance before the Senate Judiciary Committee in May, when Barr proved unable to answer a question from Harris about whether Trump or another White House official ever directly asked or suggested that he investigate anyone," Politico noted. "After the hearing, Harris wrote a letter to Horowitz, asking him to investigate. In the Tuesday letter, the senators write that Horowitz never responded or confirmed whether or not an investigation is occurring."

The letter noted the intersection of Barr's questioning and the Ukraine scandal.

“It strains credulity to maintain that Attorney General Barr was unaware of the president’s desire for him to conduct such investigations—investigations that the president mentioned to a foreign head of state and spoke of openly on cable television," the senators wrote. “These episodes again raise questions about whether the Department of Justice and its leadership participate in politically motivated investigations—a practice that threatens not only the independence of the Justice Department, but of the rule of law."

“These disturbing revelations, as well as the attorney general’s unwillingness or inability to be forthcoming when asked under oath about the president or White House’s involvement in Justice Department investigations, warrant the prompt attention of your office," the senators added.