Chuck Todd burns down GOP's Ron Johnson's Ukraine excuses: 'You seem to blame this on everybody but the president’ 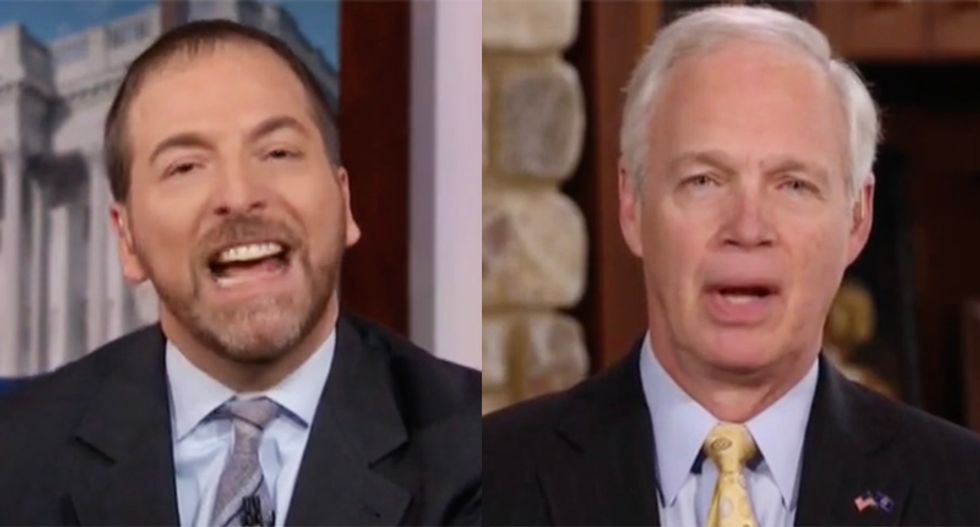 A clearly exasperated Chuck Todd was forced to talk over a loud and filibustering Sen Ron Johnson (R-WI) on Sunday morning for once again pushing Ukraine conspiracies and arguing over whether Donald Trump wanted the president of Ukraine to attack former Vice President Joe Biden on his behalf.

Having let Johnson throw out several scenarios and try and spread the blame around, Todd, finally cut in to say, "You seem to blame this on everybody but the president. It was the president’s actions."

"You’re blaming everybody else for the reason we’re in this situation, other than the president," Todd continued. "Isn’t the president’s own behavior, which raised all of these yellow and red flags, isn’t is that why we’re here?”

“I’m sympathetic with President Trump as he has been tormented from the day after his election,” Johnson offered.

Todd also accused Johnson of not looking at the facts and approaching the scandal purely with a partisan viewpoint and that he had made rumblings that Hillary Clinton would be subject to impeachment if she had won in 2016.

“How should viewers not look at what you are doing here and you’re just reacting as a partisan that, if Trump were a Democrat, you’d be ready to convict him?” Todd pressed.

"That was before an election," Johnson said in his defense.