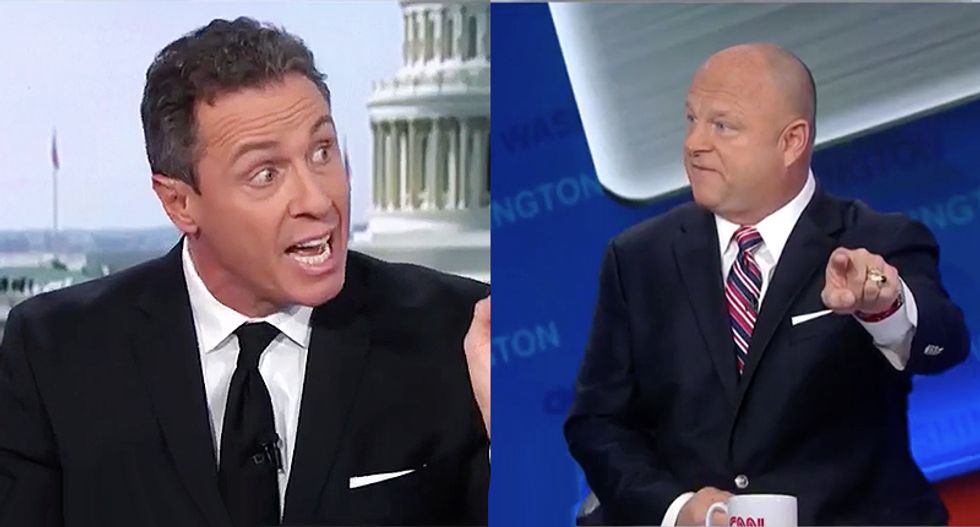 President Donald Trump's key CNN supporter, David Urban got into it with every person on the panel Thursday when he attempted to spin Fiona Hill's testimony.

The key Trump talking point is to cite a Politico article that has been debunked by American national intelligence and the testimony of the experts that have appeared under oath to the House Intelligence Committee.

As host CNN John King noted from the testimony, Hill and diplomat David Holmes are "critical" for making the case of Trump's corruption.

Holmes, by contrast, testified that from the very beginning Giuliani was working with corrupt actors and outright criminals. John Bolton referred to it as a "drug deal" that he wanted no part of.

"Fiona Hill is telling you in the West Wing of the White House a man with the stature and standing of the national security adviser knew this was wrong," King continued. "And said, not just outside the lines, not just a policy that he didn't like, that it was wrong. So, go to the lawyers and say I am not, we are not part of a drug deal.' They need the corrupt intent to take it from 'Trump being Trump, Trump being disruptive, Trump being different' to 'Trump committing an impeachable offense.'"

Urban tried to claim that they weren't reliable witnesses because they disagreed with the president's Ukraine policy and were somehow out to get him.

Urban then pulled out the debunked Politico story to begin quoting. The panel responded with fact checks.

"Don't read something that you know has been debunked by your own intelligence community when you say you're a patriot," said Cuomo.

"I didn't say that the Russians did not interfere," Urban explained.

"But you're reading something to undermine the intelligence community and you're doing it to distort a reality," Cuomo shot back.

Dana Bash cut in to say that she has spoken with sources who have seen the intelligence report that refutes the Politico piece.

"It's not just looking at the computers and so forth. It's a real intelligence report with the sources and methods which they can't talk about, which Fiona Hill alluded to there, that completely debunks the fact that Ukrainians were involved," Bash continued. "This isn't a John Brennan/Obama administration thing. These are real."

"You're holding up a single political article against the findings of your intelligence community?" Cuomo shot back again.

It devolved into a shouting match from there.