Day of the Dead: From Aztec goddess worship to modern Mexican celebration

Day of the Dead might sound like a solemn affair, but Mexico’s famous holiday is actually a lively commemoration of the departed.

The nationwide festivities, which include a massive parade in Mexico City, typically begin the night of Oct. 31 with families sitting vigil at grave sites. Mexican tradition holds that on Nov. 1 and 2, the dead awaken to reconnect and celebrate with their living family and friends.

Given the timing, it may be tempting to equate Day of the Dead with Halloween, a ghost-themed U.S. holiday. But the two holidays express fundamentally different beliefs.

While Halloween has its origins in pagan and Christian traditions, Day of the Dead has indigenous roots as a celebration of the Aztec goddess of death. 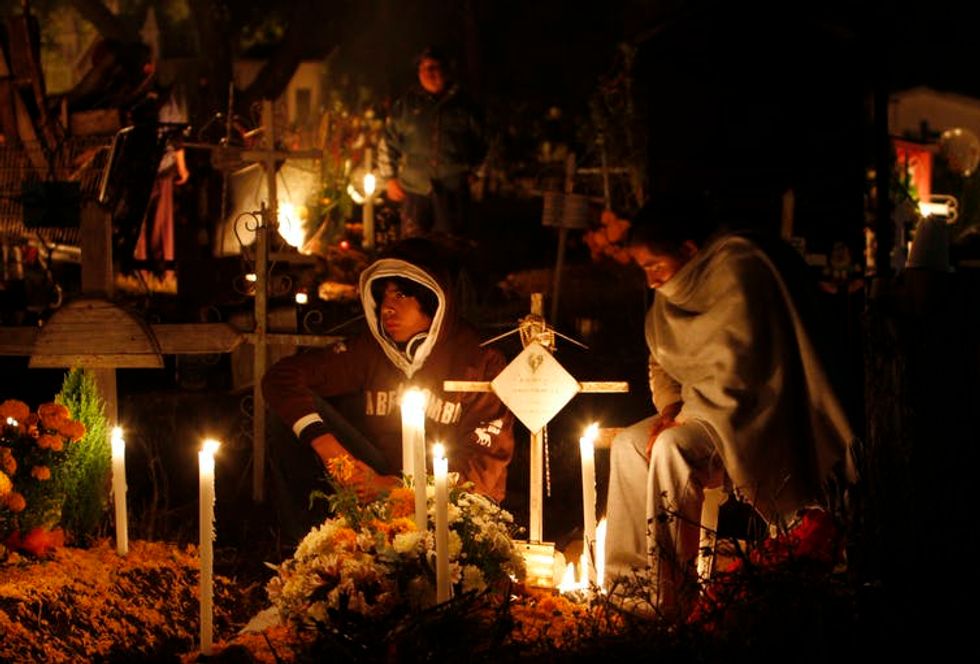 Mexico’s Day of the Dead begins with an overnight graveside vigil on Oct. 31.

Day of the Dead can be traced back to the native peoples of central and southern Mexico, the regions where I conduct my archaeological research.

When the Spanish arrived in central Mexico 500 years ago, the region had millions of indigenous inhabitants. The conquistadores largely characterized them as Aztecs because, at the time, they were united under the expansive Aztec empire.

According to colonial period records, the Aztec empire was formed in A.D. 1427, only about a century before the arrival of Spanish . But the celebration that Mexicans now call Día de los Muertos almost certainly existed many centuries earlier, perhaps originating with the Toltec people of central Mexico.

In any case, by the time the Spanish conquistadors invaded in 1519, the Aztecs recognized a wide pantheon of gods, which included a goddess of death and the underworld named Mictecacihuatl. She was celebrated throughout the entire ninth month of the Aztec calendar, a 20-day month that corresponded roughly to late July and early August. 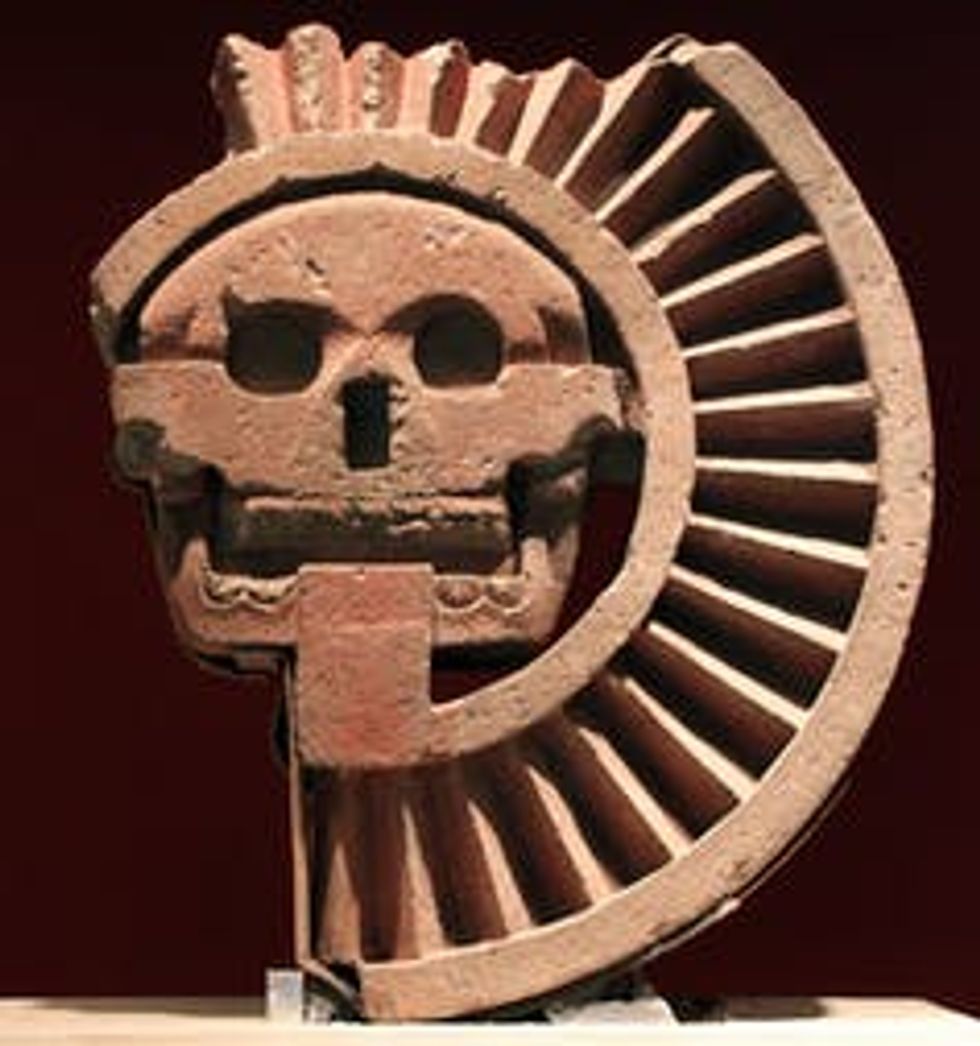 Aztec mythology tells that Mictecacihuatl was sacrificed as a baby and magically grew to adulthood in the underworld, where she married. With her husband, she presided over the underworld.

Mictecacihuatl – who is often depicted with flayed skin and a gaping, skeletal jaw – was linked to both death and resurrection. According to one myth, Mictecacihuatl and her husband collected bones so that they might be returned to the land of the living and restored by the gods.

The Aztecs appeased these fearsome underworld gods by burying their dead with food and precious objects.

Archaeologists and historians know relatively little about the details of the month-long celebration of Mictecacihuatl, but say it likely involved burning incense, song and dance, and blood sacrifice – customary practices in many Aztec rituals.

The Spanish invaders of Mexico were Catholic, and they worked hard to evangelize native peoples. To stamp out lingering indigenous beliefs, they demolished religious temples, burned indigenous idols and destroyed Aztec books.

But indigenous people in Mexico, as across the Americas, resisted Spanish efforts to eradicate their culture. Instead, they often blended their own religious and cultural practices with those imposed on them by the Spanish. 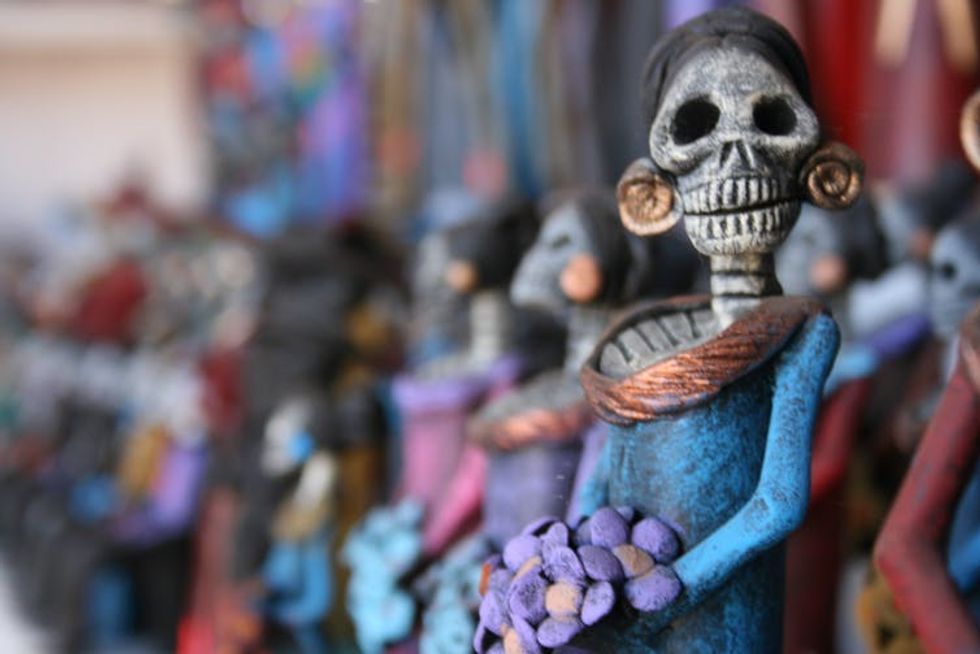 A calavera – Day of the Dead skeleton – all dressed up for that afterlife party.

Many Mexican Catholics believe that in 1531 the Virgin appeared to Juan Diego, an indigenous Mexican farmer, and in his native language of Nahuatl told him to build a shrine to her. Today the Basilica of Our Lady of Guadalupe in Mexico City is among the world’s most visited holy sites.

Day of the Dead is almost certainly a similar case of blended cultures.

Spanish conquerors faced difficulty in convincing native peoples to give up their rituals honoring death goddess Mictecihuatl. The compromise was to move these indigenous festivities from late July to early November to correspond with Allhallowtide – the three-day Christian observance of All Saints’ Eve, All Saints’ Day and All Souls’ Day.

With this move, the holiday was nominally connected to Catholicism. But many practices and beliefs associated with the worship of the dead remained deeply indigenous.

Contemporary Day of the Dead rituals were featured prominently in the 2017 Disney/Pixar film “Coco.” These include homemade sugar skulls, decorated home altars, the fantastical spirit animals called alebrijes and images of convivial calaveras – skeletons – enjoying the afterlife in their finest regalia.

The use of Mexican marigolds to adorn altars and graves on Day of the Dead probably has indigenous origins. Called cempasúchil by the Aztecs, the vibrant Mexican marigold grows during the fall. According to myth, the sweet smell of these flowers awaken the dead. 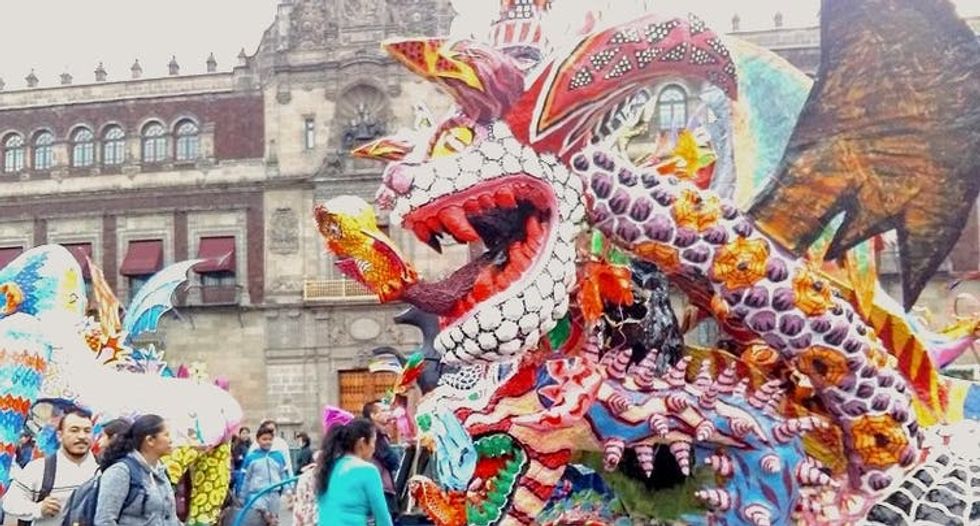 The elaborately decorated shrines to deceased loved ones, which usually contain offerings for the dead, may also have pre-Hispanic origins. Many indigenous peoples across Mesoamerica had altars in their houses or patios. These were used to perform household rituals, worship gods and communicate with ancestors.

The bones, skulls and skeletons that are so iconic of Day of the Dead are fundamentally indigenous, too. Many Aztecs gods were depicted as skeletal. Other deities wore bones as clothing or jewelry.

The Aztecs, who engaged in ritual human sacrifice, even used human bones to make musical instruments. The Aztec capital city of Tenochtitlan had a large bone rack, called a tzompantli, that stored thousands of human skulls.

And when Aztec commoners buried deceased family members under their own houses to keep them close, Mictecacihuatl became the formidable guardian of their bones.

That’s good reason, the Aztecs would say, to celebrate this goddess of death with breads, flowers and a killer three-day party.

This story has been updated to more accurately characterize the origins of Halloween.