Five takeaways from a year of French yellow vest protests 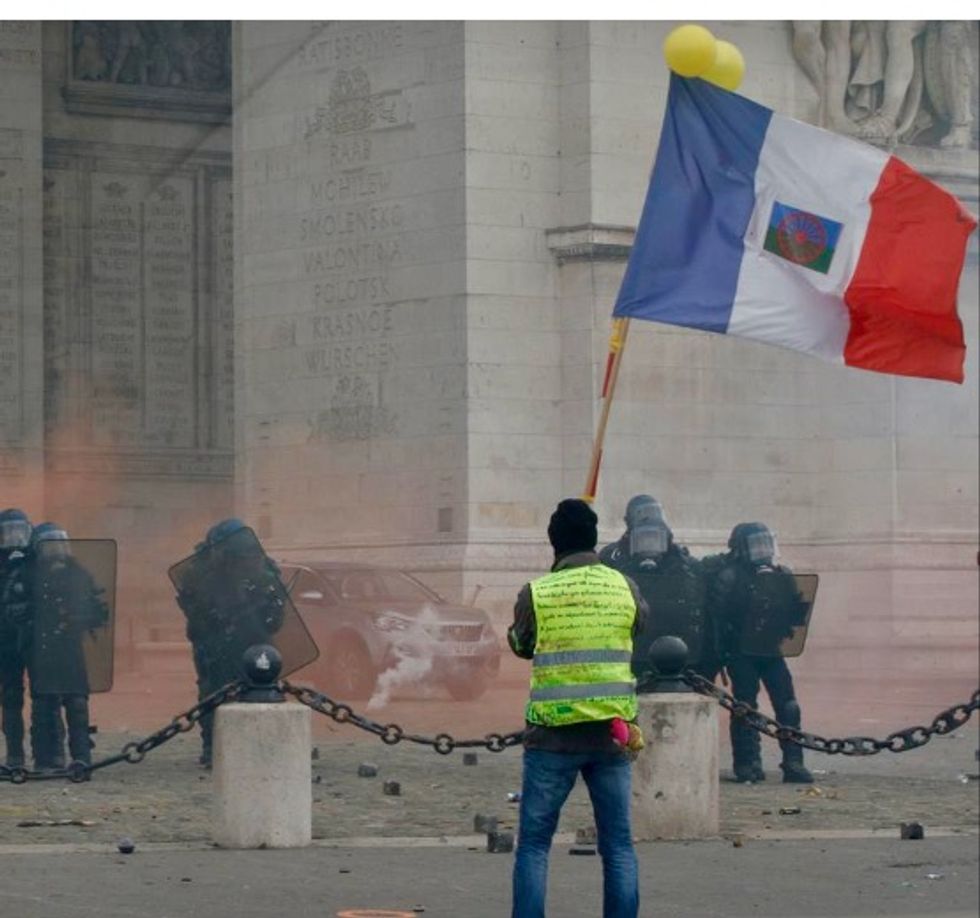 A protester wearing a yellow vest holds a flag during a demonstration by the "yellow vests" movement in Paris, France, March 16, 2019. REUTERS/Philippe Wojazer

France's yellow vest protesters have had a profound effect on the country since they burst onto the scene a year ago, occupying roundabouts and staging weekly demonstrations that have sometimes ended in violence.

Here are five takeaways from a movement that rocked Emmanuel Macron's presidency and acted as an inspiration for other leaderless revolts worldwide.

France has a long tradition of violent protest, but the ferocity of the demonstrations held in Paris and other big cities last winter shocked even the most jaded French demonstration watcher.

In Paris, the Arc de Triomphe war memorial was defaced and shops on the Champs-Elysees smashed and looted. Regional bastions of the movement such as Bordeaux and Toulouse also suffered damage.

A stunned Macron, who came to office vowing not to be swayed by street protests, was soon forced to beat a retreat on a planned carbon tax hike and loosen the state's purse strings to the tune of 10 billion euros ($11 billion) for low-earning households.

"These days if you don't break stuff no one listens to you," Patrick Martineau, a 54-year-old protester in the northwestern Sarthe region, told AFP last week.

During the first few weeks of protests, the police were accused of holding back as small groups of ultraviolent protesters ran amok in Paris.

But as the weeks passed the police found themselves in the dock over the number of serious injuries among the protesters.

Twenty-four demonstrators lost an eye, five lost a hand, and one a testicle, activists say. Nearly all the victims blamed the police's liberal use of rubber bullets and stun grenades.

After hundreds of complaints to a police oversight body, two officers were ordered to stand trial. One was filmed slapping a demonstrator in the face and the other was filmed throwing a paving stone at protesters.

To provide an outlet for the yellow vests' anger, Macron launched a series of town hall debates across the country to discuss his policy choices.

Over half a million people took part in thousands of meetings in community halls across the country, with hundreds of thousands of others offering up suggestions on a government website.

Most yellow vests boycotted the consultations, accusing Macron of prejudging the outcome by taking their top demands off the table.

But the president ploughed ahead regardless, emerging energised from 92 hours of consultations around the country that helped him claw back some points in opinion polls.

One of the main casualties of the protests was a carbon tax on motor fuel, which Macron, who had pledged to "make our planet great again," argued was necessary to fight climate change.

Faced with the wrath of car-dependent voters in rural and suburban France, who accused him of holding them to ransom while letting metro-riding urbanites off scot-free, Macron was forced to rescind the carbon tax hike.

"You're right," he wrote to the million-plus people who signed a petition criticising the fuel tax increases.

The scenes of looting and destruction during yellow vest protests in Paris and other cities were grist to the mill of Macron's opponents.

US President Donald Trump, a climate sceptic who pulled out of the Paris climate accord, mocked his counterpart over the fuel tax protests, noting that "the Paris Agreement isn't working out so well for Paris".

Russian President Vladimir Putin also took a swipe at Macron after France urged Moscow to uphold the rights of protesters who took to the streets this summer over an election ban on opposition figures.

During a visit to France, Putin cited the yellow vest protests as a cautionary tale, saying: "We would not want such a thing to happen in the Russian capital."

The Chinese embassy in Paris also brought up the unrest after France echoed an EU statement expressing concern over the use by police of live bullets against protesters in Hong Kong.

Noting that French police had been criticised over their handling of the yellow vest protests, the embassy asked that France show it the same "empathy" it had been shown by Beijing.