Fox News political editor: Biden is ‘in Trump’s head’ – and he would crush the president if the election was tomorrow 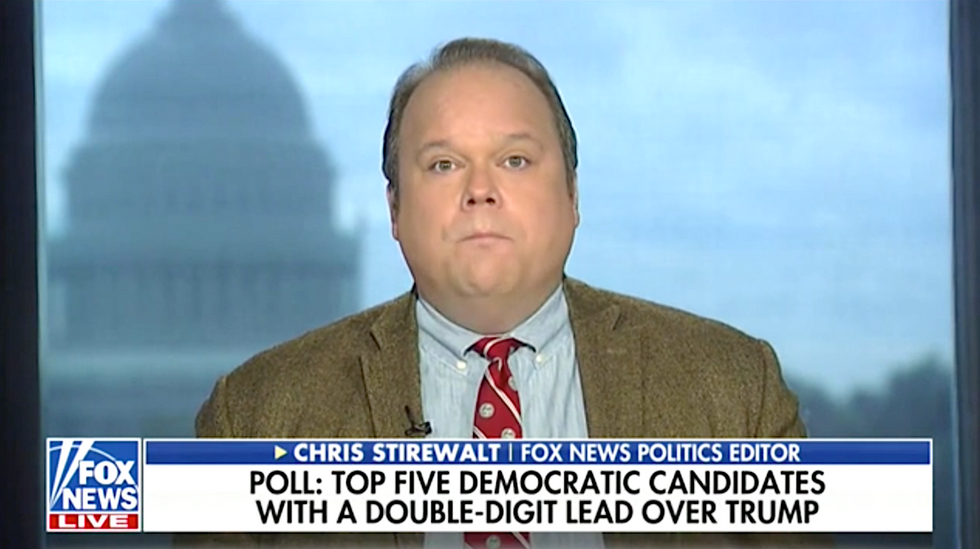 During a segment on Fox News this Tuesday morning, anchor Bill Hemmer rattled off some recent polling showing 2020 Democratic presidential candidate Joe Biden leading President Trump if the election were held today. Hemmer then turned to Fox News political editor Chris Stirewalt to get a sense of why so many polls show a "neck-in-neck" race.

According to Stirewalt, Democrats know that if Elizabeth Warren is the nominee, they'd "have huge problems" in swing states, which is an advantage for Biden.

"If the election were held tomorrow and it was Joe Biden verses Donald Trump and it was a snap election, Joe Biden would beat Donald Trump, and it wouldn't be a very close race," Stirewalt said. "But, what Republicans also know is they're going to spend a billion dollars roughing up Joe Biden."

"The lesson for Trump here is, and he's gotta remember this ... if money mattered and organization mattered that much, Jeb Bush would have won the Republican nomination in 2016 and Hillary Clinton would be the president today," he added.

Stirewalt went on to say that Trump is the "most vulnerable incumbent president that we've seen."

Closing out the segment, Hemmer pointed out that Biden was the only Democratic candidate Trump mentioned by name during his Monday rally in Lexington, Kentucky.