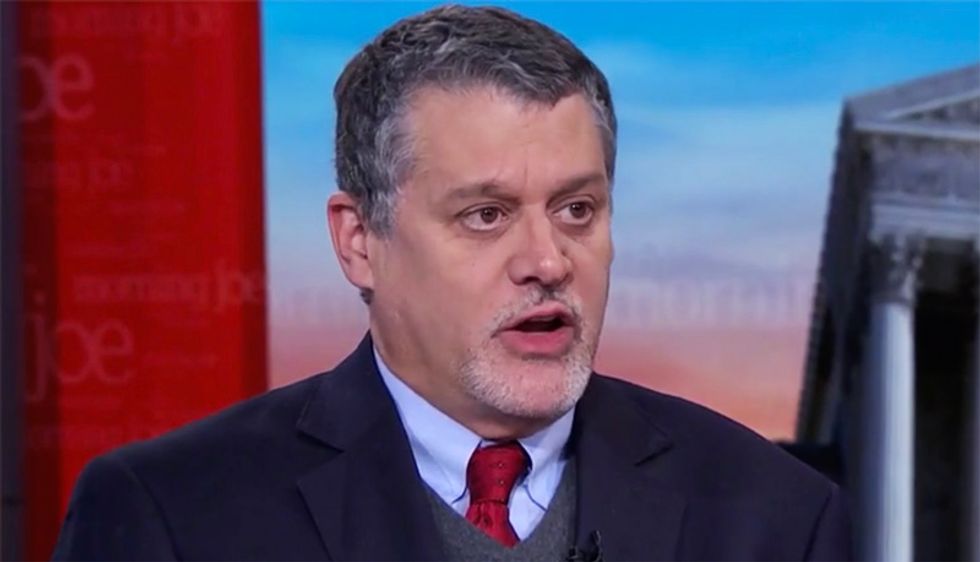 Speaking with Morning Joe co-host Willie Geist and MSNBC regular Ken Dilanian, they got right to the point while promoting their book, "Crime in Progress: Inside the Steele Dossier and the Fusion GPS Investigation of Donald Trump."

"Glenn, Fusion GPS, the Steele dossier have become these buzz terms for the last three or four years," Geist began. "We heard them come up in the impeachment hearing in the open hearings. I want to go back to the beginning of who hired you during the campaign to look into then-candidate Donald Trump in 2015?"

"Right," Simpson swiftly replied. "Originally we were retained by a conservative newspaper during the Republican primaries. and it was an intra-Republican competition."

"We worked for about seven months looking into Donald Trump during the Republican primaries and that's important to remember and is detailed in length in the book because the Republican talking points now is that this is some kind of Democratic hoax or conspiracy," he continued. "That doesn't make logical sense because the Republicans paid for half of the investigation."

"So we're talking about September of 2015, the Washington Free Beacon conservative outlet comes to you at the time, like many Republicans opposed to Donald Trump and was looking for dirt," Geist prompted. "When did they stop their association with you and who picked it up from there?"

"First of all, let's correct this a little bit," Simpson replied. "We weren't looking for dirt so much as an understanding of who this individual was, his business record, you know. This is the first time a real estate executive has run for president."

"And, you know," he continued, "We actually amassed a lot of evidence of a -- I would call it sort of an ecosystem of compromise around Donald Trump and people affiliated with the former Soviet Union. People like Felix Sater who was a convicted criminal and once stabbed someone in the face with a margarita glass, and went to prison for it."

"Then we saw a poker ring being run by the Russian mob out of Trump Tower, you know, which hosted the likes of famous people," he continued. "When you stack a lot of that up, we got to the point where we felt like we needed to know a little bit more because public records laws aren't so great in Russia."