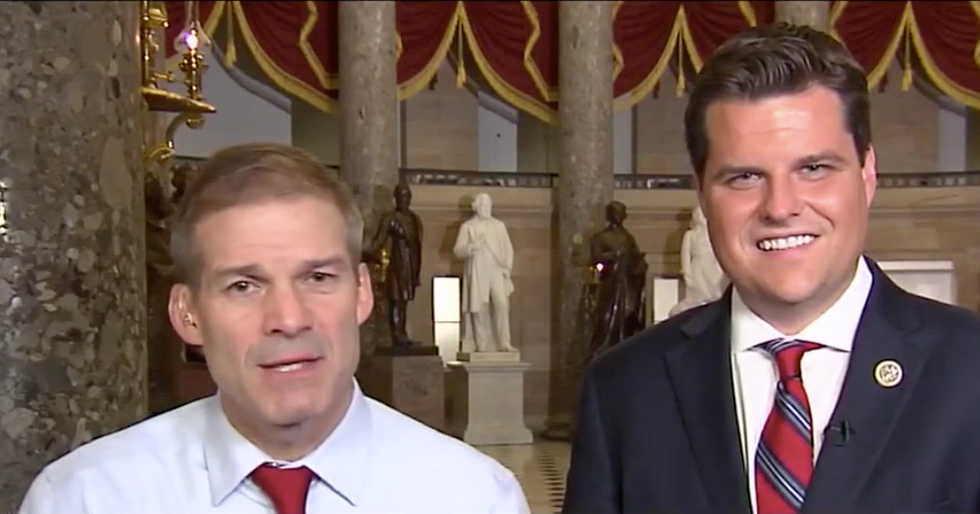 In a blunt column for the conservative Bulwark, author Robert Tracinski took both Donald Trump and his most rabid defenders in Congress to the woodshed for blaming whatever bedevils the president on a mysterious "deep state" within the federal government seeking to destroy him.

"Just as 'fake news' is the epithet thrown around as a magic formula to justify refusing to pay attention to any fact you don’t like, so too is the 'deep state' a magic formula used to justify ignoring the latest evidence of President Trump’s malfeasance in foreign policy," Tracinski wrote, before explaining, "The formula is simple: wave any and all damaging testimony off as a political hit job by a secret cabal of unelected officials."

Noting, "When Trump and his supporters use the phrase, it’s just an overdramatic, hair-on-fire way of whining about the mundane fact of bureaucracy," the author points out that most of Trump's complaints stem from not being able to get his policies implemented and in many cases the lack of progress can be tied to his own appointees trying to rein in his worst excesses -- something ignored by most of his GOP defenders.

"If you look at these claims, they’re really just a complaint that the president has to act through others. He makes decisions, but he has to do so on the basis of information given to him by thousands of lower-level government officials, who are then charged with implementing his decisions," he wrote, adding, "If Trump is upset that those officials are not responding to him or not telling him what he wants to hear, notice that most of the people he has been complaining about—Rex Tillerson, James Mattis, John Bolton—are people he appointed. So if he feels they have been thwarting him, that is partly because Trump is a bad manager who doesn’t know how to hire people or work with them."

According to the columnist, when Trump doesn't get his way with his advisors he grows frustrated and does an "end-run," such as his ill-advised abandonment of Syrian Kurds, that often end in disaster.

"Trump is so suspicious of the professional staff—many drawn from the State Department and the CIA—and so dismissive of the 'deep state' foreign policy establishment, that he usually announces decisions first, and forces the staff to deal with them later," he explained. "Even if Trump were a far more effective manager, it is still a good thing that a president cannot alter all of the American government every four years to suit his peculiarities. It’s good that Trump can’t do it, it was good that Obama couldn’t do it, and it will be good that Biden or Warren or whoever comes next won’t be able to do it."

"Any talk about the 'deep state' that isn’t an outright conspiracy theory is just a complaint that the president’s whim is not taken as law," he added before concluding, "Yet that’s exactly how our system is supposed to work."

You can read the rest here.