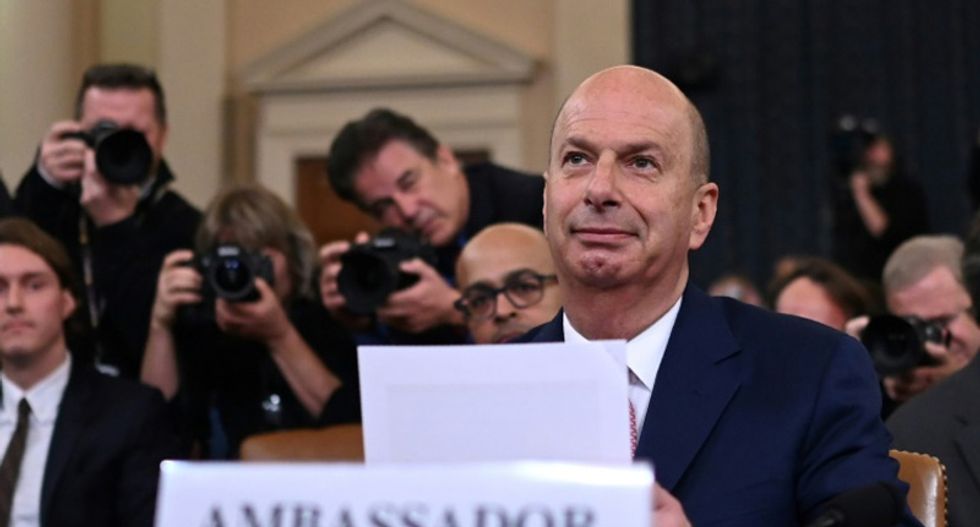 The US ambassador to the European Union told an impeachment hearing Wednesday that he followed President Donald Trump's orders in seeking a "quid pro quo" deal for Ukraine to probe a political rival in exchange for a White House summit.

In explosive televised testimony, Sondland -- whose appearance was being watched especially closely as he was a Trump ally -- said he believed the president was pressing Ukraine to investigate his potential 2020 challenger Joe Biden.

"We followed the president's orders," Sondland testified before the House Intelligence Committee.

He said that Trump forced US diplomats to work with his personal lawyer, former New York mayor Rudy Giuliani.

Sondland said that Trump held off on offering a summit with Ukraine's new president, Volodymyr Zelensky, as Giuliani demanded that Kiev publicly announce it was investigating a gas company on which former vice president Biden's son Hunter held a paid board position.

Giuliani also wanted Zelensky to investigate a widely discredited conspiracy theory that Ukraine planted evidence on a server of Biden's Democratic Party to show that Russia interfered in the 2016 election.

Sondland said he "never received a clear answer" on why the White House suspended $391 million in security aid to Ukraine, which is battling Russian-backed separatists, but that he "came to believe" it was also tied to the investigations sought by Trump.

"I was adamantly opposed to any suspension of aid, as the Ukrainians needed those funds to fight against Russian aggression," he said.

"In the absence of any credible explanation for the suspension of aid, I later came to believe that the resumption of security aid would not occur until there was a public statement from Ukraine committing to the investigations of the 2016 election and Burisma, as Mr Giuliani had demanded," he said.

Sondland was appearing in the second week of televised hearings in which Democrats are seeking to establish whether Trump abused the power of his office by leveraging military aid and a White House meeting to extract a commitment from Zelensky to probe the Bidens.

The House investigation could conceivably wrap up this week, with evidence then sent to the House Judiciary Committee to draw up articles of impeachment.

Trump's impeachment by the Democratic-controlled House would place Trump on trial in the Senate, where a Republican majority could protect him from removal.

Sondland said that he and two fellow US officials, Energy Secretary Rick Perry and Ukraine Special Envoy Kurt Volker had "worked with Mr Rudy Giuliani on Ukraine matters at the express direction of the President of the United States."

"We did not want to work with Mr Giuliani. Simply put, we were playing the hand we were dealt," he said.

His testimony was likely to pile fresh pressure on Giuliani, the former mayor of New York who had other business interests in Ukraine and who has refused to testify or hand over documents to the impeachment probe despite a subpoena.

It could also undermine Republican efforts to shield Trump by suggesting Sondland and Giuliani had pursued their own efforts in Ukraine outside formal diplomatic channels.

Sondland denied that the trio, dubbed the "three amigos," were involved in "some irregular or rogue diplomacy" that departed from White House policy.

He said top officials in the White House and State Department, including Secretary of State Mike Pompeo and then-National Security Advisor John Bolton, were all informed about the Ukraine efforts.

Sondland added that, from the outset when Zelensky took office in April, Trump was "skeptical" of building a relationship with Kiev.

"He expressed concerns that the Ukrainian government was not serious about reform and he even mentioned that Ukraine tried to take him down in the last election."

"In response to our persistent efforts to change his views, President Trump directed us to 'talk with Rudy.'"