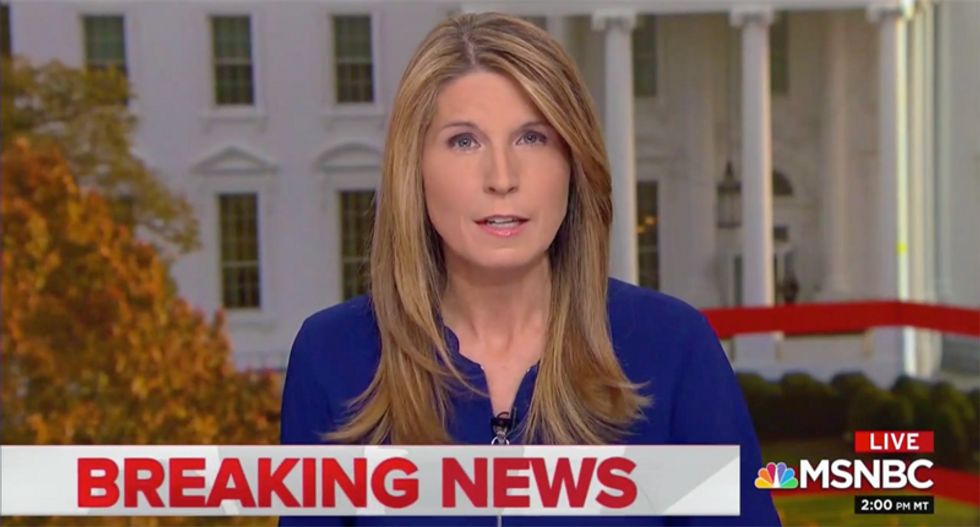 MSNBC anchor Nicolle Wallace broke down the political ramifications of transcripts released by the House on Monday.

"We are getting our very first look at the first batch of transcripts from witnesses in the impeachment investigation into Donald Trump. They provide a breathtaking and disturbing look at how life-long diplomats were threatened, intimidated, coerced and smeared by Donald Trump and his allies," Wallace reported.

Prior to her career in journalism, Wallace was the White House communications director for President George W. Bush.

"The transcripts paint a devastating picture of the foreign policy process, twisted and contorted to serve Donald Trump’s political ambitions, not U.S. National security. And if a single fact pattern emerges from the nearly 500-pages of sworn testimony, it’s the constant and repeated clash between Donald Trump’s attempts at corrupting U.S. Foreign policy to smear political opponents and the quiet resistance to his corruption from career public servants with decades of service to United States presidents under Republicans and Democrats," she explained.

"That transcript of the interview with former U.S. Ambassador to Ukraine Marie Yovanovitch, it becomes clear that she feared for her safety, that her calls to the State Department went largely unanswered and that the danger she represented to Donald Trump was that she was onto him and his personal lawyer, Rudy Giuliani," Wallace reported.

Rhodes said, "so much of the focus has been on this one phone call. This was a multi months-long effort to essentially completely corrupt the relationship between Ukraine and the United States to serve Trump’s interest because she didn’t want to go along with Rudy Giuliani moonlighting as the Secretary of State and trying to get this dirt on Biden."

"You know, Phil Rucker, it’s so interesting that the Republican position -- and I know we are all living dog years covering this impeachment -- but it was just a few short days ago that they stormed the SCIFs, they stormed the secure briefing rooms for transparency. Well, how about that transparency?" Wallace asked.

"It’s a brutal, brutal takedown of what I think, as Ben said, sort of the corruption of this relationship with an American ally -- all in the service of dirt on the Bidens," she added.

"Yeah, Nicole. What happened today is exactly what Republicans and the president himself have been clamoring for, for weeks which is to see the full transcripts to let the American people hear everything that these witnesses are saying because they thought that the Democrats that Chairman Adam Schiff (D-CA) and others were selectively leaking out details from the testimony into the media over the last few weeks" Rucker explained. "Well, now we have seen the full transcript from some of these key witnesses, including the ambassador and there’s no way to describe this other than a pretty devastating portrayal of the way foreign policy was conducted by the Trump Administration and by the president himself with regards to Ukraine over these last few months."

"The president has not reacted fully yet to what’s unfolded today. He has been fixated on defending his conduct in that one goal call with President Zelinsky of Ukraine as 'perfect' or 'perfecto' to use some words that he’s been using the last few days," he reported. "But as Ben just pointed out, this is about so much more than that phone call and it’s about an entire pattern and work product of foreign policy in the administration that he’s going to have to answer for."