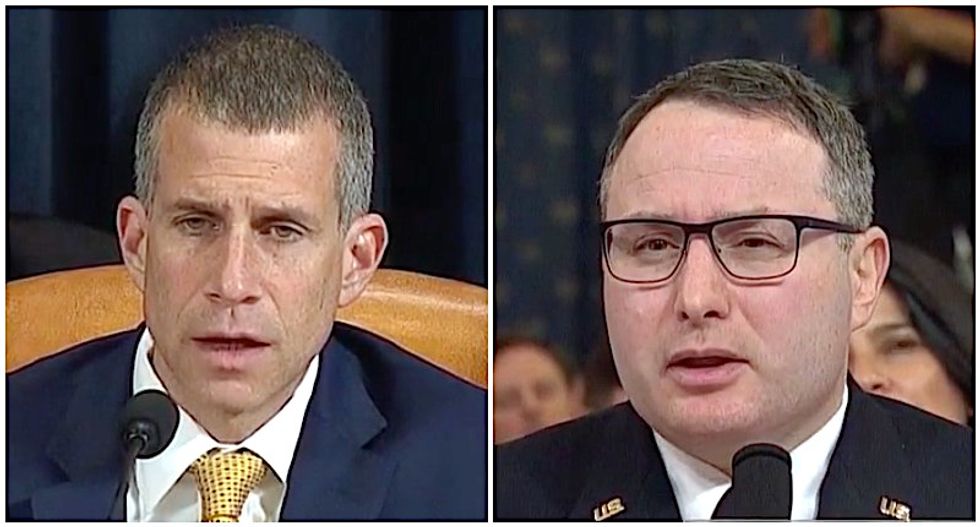 Lt. Col. Alexander Vindman laughed off questions about an offer by a Ukrainian official to serve as that country's defense minister.

The Soviet-born Vindman, who emigrated to the U.S. as a child and later served in the Iraq War, agreed that a Ukrainian official had offered him the government position three times during an official visit for the inauguration of the country's new president, Volodymyr Zelensky.

"I don't know (why the position was offered), but every single time I dismissed it," Vindman said. "Upon returning I notified my chain of command and the appropriate counter-intelligence folks about the offer."

"I think it would be a great honor, and frankly I'm aware of service members that have left service to help nurture the developing democracies in that part of the world," Vindman testified. "If I recall correctly, it was an Air Force officer that became a minister of defense."

But I'm an American," he added. "I came here when i was a toddler, and I immediately dismissed these offers, did not entertain them."

Castor continued pressing Vindman, whose loyalty has been questioned by Fox News broadcasters and guests.

"The whole notion is rather comical that I was being asked to consider whether I'd want to be the minister of defense," Vindman said. "I did not leave the door open at all."

Vindman said Danyliuk's offer was never made again, and Castor asked if the initial offer may have compromised him.

"I'm not sure if you meant it as a joke or not," Vindman said, "but it's much more important what my civilian White House national security council chain of command thinks more so than anybody else, and frankly, if they were concerned about me being able to continue my duties, they would have brought that to my attention."