Inside the extreme right-wing's plan to take over campus conservatism 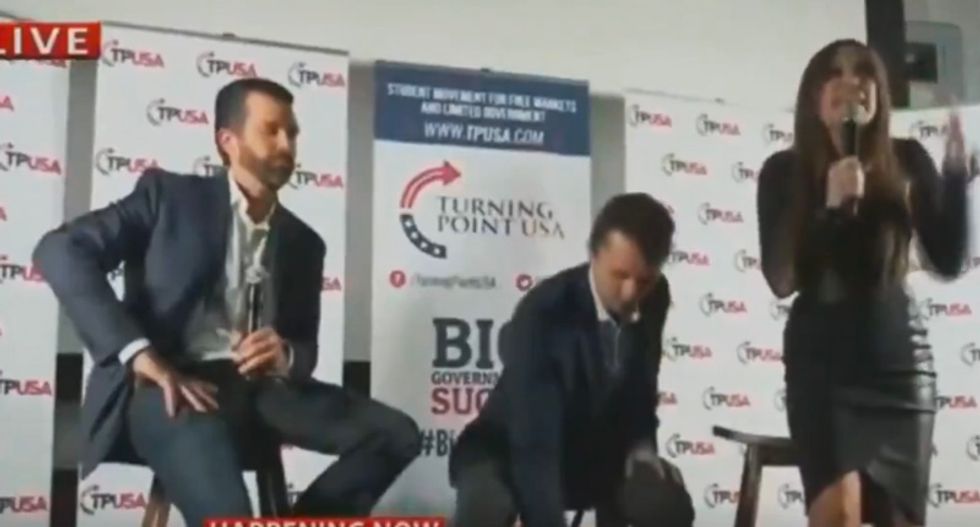 President Donald Trump's eldest son found himself caught in the middle of an alt-right takeover of a libertarian group with close ties to mainstream conservatism, and video of the encounter provided an embarrassing start to his book tour.

Right-wing activists led by white nationalist Nick Fuentes have been turning up at campus events sponsored by Turning Point USA and other conservative groups to boost their racist, anti-LGBT and anti-Semitic messages, reported The Daily Beast.

More mainstream right-wingers like podcaster Ben Shapiro and Turning Point's Charlie Kirk have used campus Q&A events to spread their own messages -- and more importantly, to set the stage for dramatic confrontations with lefty protesters in hopes of creating a viral moment that further amplifies their conservative views.

Fuentes, a 22-year-old Holocaust denier who marched at Charlottesville, has encouraged his followers -- who call themselves "Groypers," after a cartoon toad similar to the alt-right's Pepe the Frog mascot -- to reframe Trump's "America First" rhetoric at these same events in opposition to mainstream conservatism.

The event's question-and-answer segment had already been canceled days ahead, after Turning Point USA learned of efforts to disrupt the event, but alt-right demonstrators in the audience demanded a chance to interview Trump Jr. and Kirk.

“I bet you engage in online dating," she said, "because you’re impressing no one here to get a date in person."

The encounter went viral and earned a fresh round of ridicule for Trump Jr., but Fuentes was thrilled by the turn of events.

“What a HUGE victory today,” Fuentes posted on encrypted messaging app Telegram. “Cannot be understated what an incredible win we saw at UCLA.”

The group confronted Rep. Dan Crenshaw (R-TX), a rising star on the right, two days earlier at a Turning Point event at Arizona State, asking the congressman hostile questions about the 1967 Israeli attack on the USS Liberty that left 34 crew members dead.

“What do you call yourselves?” Crenshaw said in response. “The ‘groppers’? It’s a very strange name. These guys are the Alt Right 2.0.”

Fuentes has been feuding with Turning Point since at least March, when he thought he'd been invited by a campus chapter of the group at Iowa State, and over perceived slights since then.

The feud has split right-wingers into camps supporting Fuentes -- including InfoWars personalities and Ann Coulter -- and more mainstream conservatives suspicious of the "groypers," including former White House adviser Sebastian Gorka.

Two Turning Point chapters have dissolved, either because members supported Fuentes or over complaints about free speech apparently related to the feud.