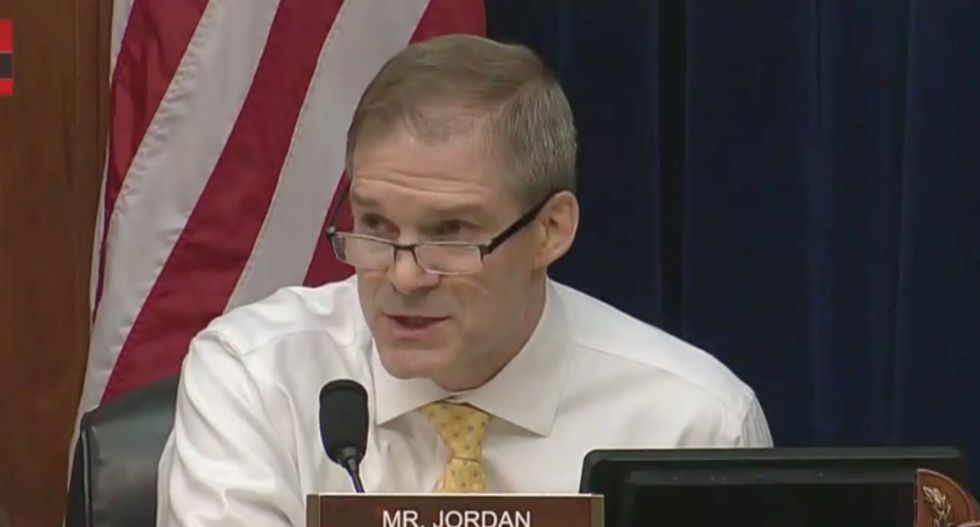 Republican House Minority Leader Kevin McCarthy (R-CA) announced that he appointed Rep. Jim Jordan (R-OH) to the House Intelligence Committee and he's expected to be there to disrupt the upcoming impeachment hearings.

Jordan joins Rep. Devin Nunes (R-CA), who was once President Donald Trump's top ally in working to hide key facts in the Russia election interference investigation. House leadership hasn't given a reason that Nunes can't handle the hearings himself. Nunes, however, may be preoccupied with multiple lawsuits he has in Virginia where he is suing fake Twitter accounts known for making fun of him.

Jordan joins the committee just as new information is coming forward about his involvement in the child molestation scandal at Ohio State University. A referee came forward this week saying that he told Jordan about the Ohio State doctor performing sex acts in the shower after wrestling matches.

It prompted the internet to unleash ridicule of Nunes and disgust and anger that Jordan would be trusted by anyone.

I honestly am impressed that Schiff hasn't punched Jim Jordan in the face based on the way Jordan acts in these hea… https://t.co/OCdNC7zJnZ
— Emily C. Singer (@Emily C. Singer) 1573236161.0

@TrueFactsStated This may be the first time 'Jim Jordan' and 'intelligence' have been used in the same sentence.
— Dora Scott (@Dora Scott) 1573240948.0

Everytime @Jim_Jordan gets in front of a camera or mic from now on, the response to whatever continuing falsehoods… https://t.co/E8DNUKUM9H
— Keith Alan Watts (@Keith Alan Watts) 1573239583.0

If anyone should resign, its @Jim_Jordan By not protecting students he condoned the sexual abuse @HouseJudiciary… https://t.co/PG7muQQUF1
— Airmid (@Airmid) 1573240521.0

@GOPLeader @Jim_Jordan @RepRickCrawford Nice choice - a man who is dumb as a box of rocks and ignores crimes being… https://t.co/kxQtBcqFam
— Jackie Sedlak (@Jackie Sedlak) 1573240670.0