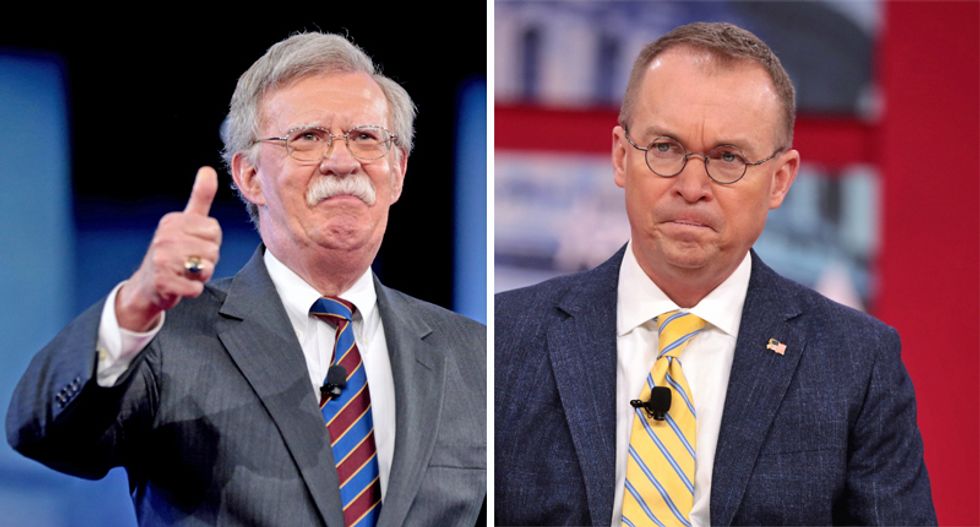 Former National Security Advisor John Bolton told a federal judge on Monday that his interests do not align with those of acting White House chief of staff Mick Mulvaney.

The lawsuit was filed by former Deputy National Security Advisor Charles Kupperman, who asked a judge to decide whether he should abide by a congressional subpoena or obey Trump's edict to stonewall Congress.

"Mr. Bolton’s lawyer argued in court papers that Mr. Mulvaney should not be allowed to jump into the existing lawsuit as a plaintiff because his interests are significantly different," The Times reported. "But the legal schism underscored a broader rift between Mr. Mulvaney, who facilitated Mr. Trump’s effort to pressure Ukraine for damaging information about Democrats, and Mr. Bolton, who tried to resist it."

Bolton and Kupperman were both reportedly "flabbergasted" that Mulvaney attempted to join the lawsuit.

And poof! Mulvaney withdraws his motion to intervene & and says he will file separately as “discussed” during telephonic conference.
— Ariane de Vogue (@Ariane de Vogue)1573515511.0