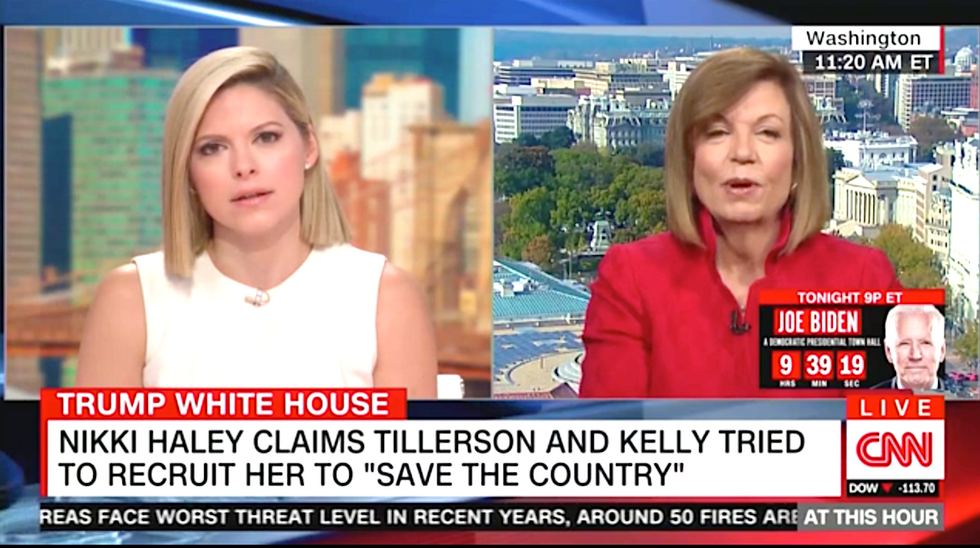 Former United Nations ambassador Nikki Haley's has a new book out, claiming that former Secretary of State Rex Tillerson and former White House Chief of Staff John Kelly tried to recruit her to counter what they saw as President Trump's destructive policies, but she refused. In a segment this Monday, CNN's Kate Bolduan said Haley "has been able to walk a fine line where others have not, which is publicly breaking from the President on certain issues and also being able to remain in his good graces," adding that President Trump is even promoting her new book, With All Due Respect, on his Twitter feed.

Page, who recently interviewed Haley, said that it's pretty clear that she's positioning herself to run for president "when the Trump era is over."

When asked about Haley's motives in taking Tillerson and Kelly to task, Page drew connections between the revelations and the explosive op-ed written in the New York Times last year by an anonymous high-level Trump staffer.

"When you go back and you listen to the language in that op-ed and the language that Nikki Haley uses in describing [Tillerson and Kelly's attempt to recruit her], they are very similar," Page said. "And this conversation she had in [Kelly's] office took place a week or two before the column ran in the New York Times."

Page said that when she asked Haley if she thought the op-ed was written by either Tillerson or Kelly, "she decline to speculate."

Couple that with the recent whistleblower revelations regarding Trump's infamous phone call with the president of Ukraine, Page says that it shows the White House is "dysfunctional."

"You can't have a functional White House when the chief of staff and the secretary of state are trying to manipulate and defy what the president wants to do," Page said.