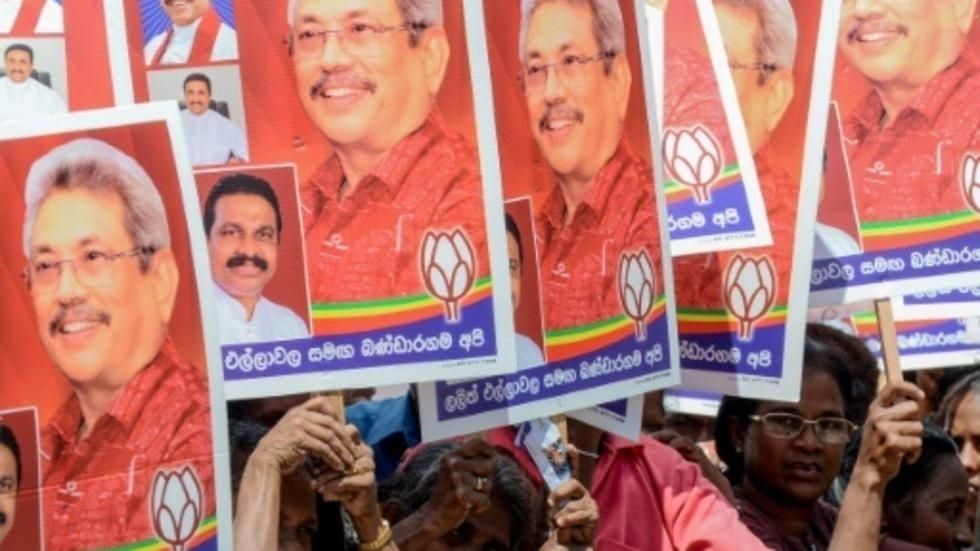 Sri Lanka's presidential election on Saturday is turning out to be a showdown between a man offering free sanitary pads and a former soldier dubbed the "Terminator" by his own family.

Gotabhaya Rajapaksa, 70, a retired army lieutenant colonel, was the de facto military chief who crushed Tamil guerrillas and ended a 37-year separatist war, but Saturday's vote is his battle of ballots.

His family calls him Sri Lanka's "Terminator" because he promises to fight corruption and Islamic extremism, a key issue since the Easter Sunday suicide bombings this year that killed 269 people.

In contrast to the tough-talking Rajapaksa, his main challenger, Sajith Premadasa, a low-key politician, is hoping to appeal to women voters with promises to improve menstrual hygiene.

Menstruation remains a taboo subject in the conservative Buddhist society and "period poverty" is a global issue. Premadasa, 52, was ridiculed by the Rajapaksa campaign for openly discussing the subject and ridiculed him as the "Pad Man".

"I remain committed to women's rights," Premadasa shot back on Twitter. "I will wear the #padman label proudly. In my view, it is certainly preferable to being the #manwiththevan."

Premadasa was referring to accusations that Gotabhaya led death squads during his brother Mahinda's decade in power up to 2015.

He denies that he was the architect of what is known as "white van abductions", when dozens of opponents were abducted never to be found again.

While Rajapaksa has no experience in politics, he makes up for it by campaigning with his charismatic older brother Mahinda.

Facing allegations of corruption and nepotism, Mahinda lost his attempt for a third term in January 2015. His attempt to become prime minister in legislative elections later that year also failed.

A new constitutional amendment barred him from contesting the presidency again, leaving his brother to take up the family mantle.

But, Gotabhaya's attempt to piggyback on his elder brother has faltered. When asked tough questions at his only public press conference during the three-month long campaign, he turned to Mahinda for answers and was ridiculed by opponents.

He also brushed aside questions about war crimes during the final offensive of the Tamil war during which some 40,000 Tamil civilians are said to have been killed.

"Why are you talking all the time on the past? Ask (about) the future," he asked. "I am trying to become the president of the future Sri Lanka. So if you concentrate on the future, it is better."

He is on bail facing prosecution for allegedly siphoning off hundreds of thousands of state cash to build a monument for his parents when his brother was president.

Gotabhaya has denied allegations that he received millions of dollars by way of kickbacks from a second-hand aircraft purchase from Ukraine in 2007. He has not been indicted but police are investigating the purchase.

He also faces a civil suit in the United States for allegedly ordering the torture of a Tamil man and several others when he was in power.

Another civil action against him in a US court was rejected on the basis that Gotabhaya had "foreign official immunity" for allegedly causing the death of an anti-establishment newspaper editor in Sri Lanka in 2009.

Rajapaksa reportedly had dual US-Sri Lanka citizenship which would preclude him from running for election, but he says he renounced US nationality this year so he could enter the presidential race.

However, Rajapaksa's nationality is still being investigated by a local magistrate. Should he win, the case will be frozen until the five-year term ends.

Candidate Premadasa is also from a politically connected family. His father was assassinated during a May Day rally in the capital in 1993. Tamil rebels were blamed for killing Premadasa who was regarded by many as an autocratic leader.

However, the younger Premadasa, the only son in a family of two children, has remained relatively low profile until he was given the party ticket to contest the elections.

His claim to fame has been the construction of government housing for lower income families, a cause championed by his late father.