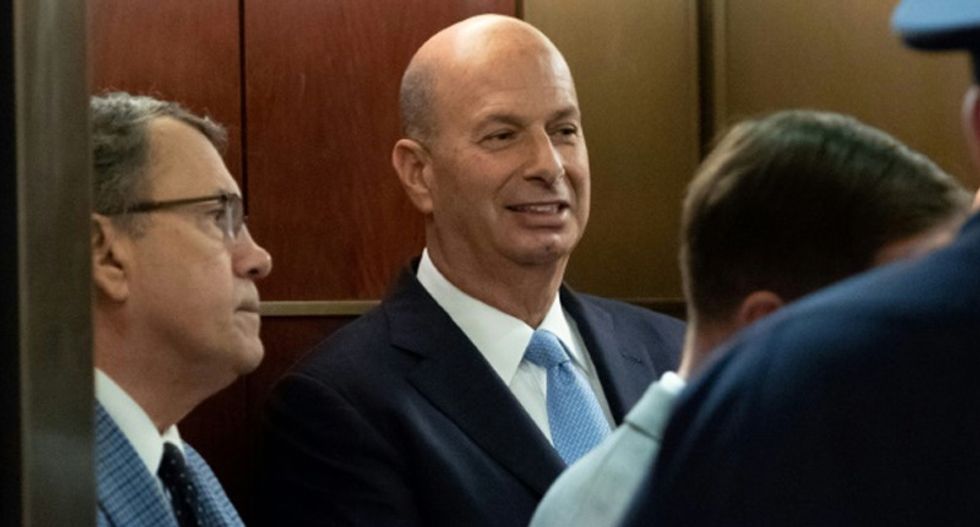 US Ambassador to the EU Gordon Sondland, a key witness in the impeachment investigation of President Donald Trump. (AFP/File / SAUL LOEB)

Ambassador Gordon Sondland’s testimony in the impeachment inquiry on Wednesday turned high-profile Republicans against each other.

His remarks sparked explosive reactions from both critics and defenders of President Donald Trump. Sondland detailed extensive evidence that he, in concert with the White House, administration officials, and with the president’s attorney Rudy Giuliani, set up a quid pro quo both with Ukraine both for a meeting with Trump and for military aid in exchange for an announcement about investigations into his political rivals. But Republicans latched on to Sondland’s claim that he didn’t recall ever hearing from Trump directly that military aid was conditioned on an announcement and that late in the process — after the scheme was coming to light — the president denied asking for a “quid pro quo.”

Sondland also said a wide range of people were involved in the negotiations he was carrying out with Ukraine, including Secretary of State Mike Pompeo, Energy Secretary Rick Perry, and Vice President Mike Pence.

“Everyone was in the loop,” Sondland said.

This, and some of the confusing and convoluted nature of Sondland’s testimony, set off Rep. Mike Turner (R-OH). He was angry that the ambassador’s remarks were being used by Democrats to bolster the argument for impeachment.

“Now, I’ve listened to you today,” Turner said during his question period. “And not only are your answers somewhat circular, frequently you’ve contradicted yourself in your own answer.”

Turner asked Sondland if he had been told by anyone that Trump tied aid to the investigations, and Sondland said, “I think I’ve already testified to that.”

“No!” Turner shot back. “Answer the question.” Sondland affirmed that it was only his “presumption.”

Turner said Sondland’s presumption “is nothing!” He went on to argue that Sondland’s claims were worse than “hearsay” — they were “made-up testimony.” Chair Adam Schiff (D-CA) later responded to this line of argument, saying that Sondland had offered extensive evidence of the quid pro quos and suggesting that Republicans expected the request to be comically explicit before rendering a judgment.

It wasn’t only Turner who got fired up by Sondland’s hearing. Giuliani, too, lashed out at the witness on Twitter.

“I came into this at [Ambassador Kurt] Volker’s request,” Giuliani wrote. “Sondland is speculating based on VERY little contact. I never met him and had very few calls with him, mostly with Volker. Volker testified I answered their questions and described them as my opinions, NOT demands. I.E., no quid pro quo!”

“Republican lawyer doesn’t do his own research and preparation, and is instead picking up Democrat lies, shame,” he tweeted. “Allow me to inform him: I have NO financial interests in Ukraine, NONE! I would appreciate his apology.”

Meanwhile, Perry and Pence both tried to distance themselves from Sondland’s claims.

“Ambassador Sondland’s testimony today misrepresented both Secretary Perry’s interaction with Rudy Giuliani and direction the Secretary received from President Trump,” said Department of Energy Press Secretary Shaylyn Hynes. “As previously stated, Secretary Perry spoke to Rudy Giuliani only once at the President’s request. No one else was on that call. At no point before, during or after that phone call did the words ‘Biden’ or ‘Burisma’ ever come up in the presence of Secretary Perry.”

Regarding Pence, Sondland had testified:

There was a September 1 meeting with President Zelensky in Warsaw. Unfortunately, President Trump’s attendance at the Warsaw meeting was cancelled due to Hurricane Dorian. Vice President Pence attended instead. I mentioned to Vice President Pence before the meetings with the Ukrainians that I had concerns that the delay in aid had become tied to the issue of investigations. I recall mentioning that before the Zelensky meeting.

During the actual meeting, President Zelensky raised the issue of security assistance directly with Vice President Pence. The Vice President said he would speak to President Trump about it.

But Pence’s office — which has been strenuously trying to distance the vice president from the scandal — essentially called Sondland a liar.

“The Vice President never had a conversation with Gordon Sondland about investigating the Bidens, Burisma, or the conditional release of financial aid to Ukraine based upon potential investigations,” Pence’s chief of staff, Marc Short, said in a statement. “Ambassador Gordon Sondland was never alone with Vice President Pence on the September 1 trip to Poland. This alleged discussion recalled by Ambassador Sondland never happened.”