Seth Meyers can't stop laughing at Devin Nunes: 'It's like murdering someone and calling their ghost to testify' 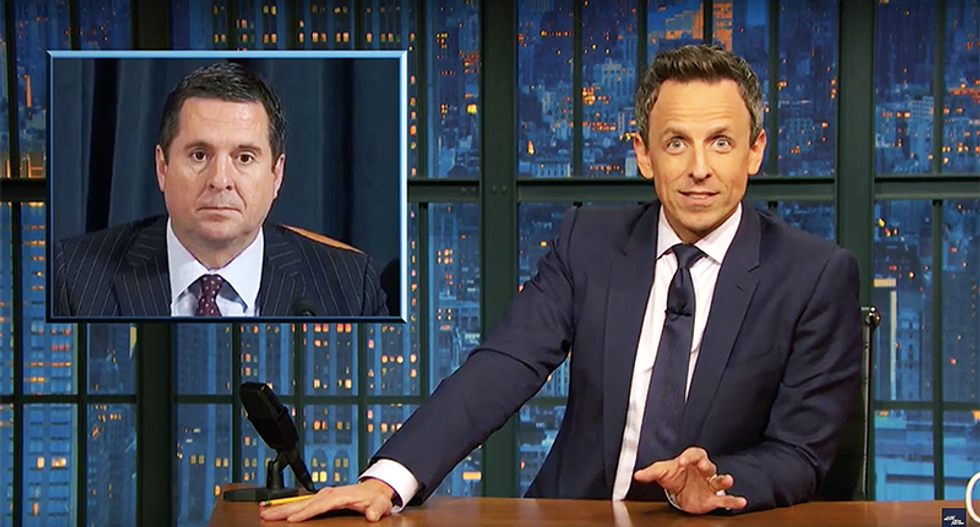 "Late Night" comedian Seth Meyers summed up the day of hearings by saying it was devastating to President Donald Trump. If you don't believe him, he showed the humiliating clip of Rep. Devin Nunes (R-CA) who looked dejected.

"Wow, look at his face!" Meyers said. "He looks like he just walked in on his parents having sex -- with someone else's parents. There's only two explanations for that face, either he just heard lengthy testimony detailing a criminal scheme so shocking to bring down the presidency of Donald Trump. Or he sharted, and he's trying to remember how far away his back-up pants are."

EU Ambassador Gordon Sondland threw everyone under the bus. Meyers compared it to the scene in "Wizard of Oz" where Dorothy said, "and you, and you, and you were there!"

"Even the White House janitor was like, 'Am I going to go to jail?'" Meyers joked.

The host went on to say that Republicans called witnesses that ultimately ended up working against them.

"It'd be like murdering someone and then calling their ghost as a witness," Meyers joked.

The worst part of the GOP disaster is that they have to keep changing their stories. As Meyers noted, it first began with "There is no quid pro quo." From there, it changed Tuesday too, "there's a quid and a quo but not pro." Finally, the GOP has settled on, "even if there was a quid pro quo, it's not that bad, this is just how things are done -- you can say it's bad, but it's not impeachable."

But as Scarlett O'Hara proclaimed, "tomorrow is another day," and if Wednesday was any indication, they will have another defense.

Check out the full segment below: