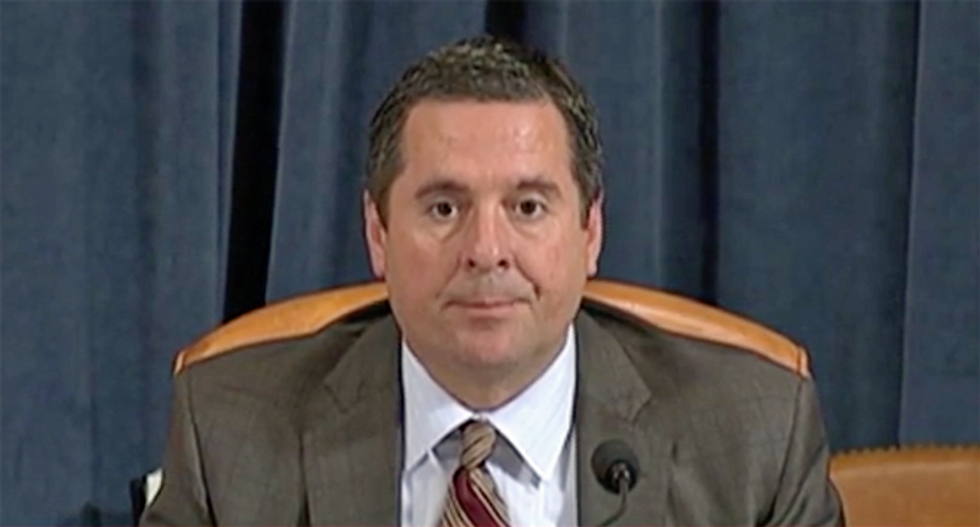 A new timeline created by Ryan Goodman and Viola Gienger of Just Security shows that the California congressman appears to have been a central figure in the whole plot, as he started meeting with Giuliani henchman Lev Parnas in late 2018.

Shortly after talking with Parnas, Nunes and a group of his aides traveled to Vienna in late November 2018 for a meeting with former Ukrainian Prosecutor General Victor Shokin, in which Nunes allegedly pressed the former top prosecutor to dig up any dirt he could on the Bidens.

It should be noted that Nunes so far has refused to confirm or deny that such a meeting took place, although an anonymous associate of Shokin did deny the meeting took place in an interview with the Washington Post.

According to Joseph Bondy, the attorney representing Parnas, some of Nunes's aides planned a trip to Ukraine this past spring to speak with two prosecutors who claimed they had information that would be helpful to Trump's reelection campaign. However, these aides allegedly canceled the trip when they believed Rep. Adam Schiff (D-CA) learned of their plans.

Also that spring, both Nunes and Giuliani had phone calls with Secretary of State Mike Pompeo at around the same time -- Giuliani spoke with Pompeo on March 29th, while Nunes spoke with Pompeo just three days later, according to phone records unearthed as part of a Freedom of Information Act request.

All of this activity culminated in this month's impeachment hearings where, notes Just Security, Nunes "repeatedly refers to the discredited allegations about Joe Biden and Burisma, as well as the conspiracy theory that Ukraine interfered in the 2016 U.S. election."