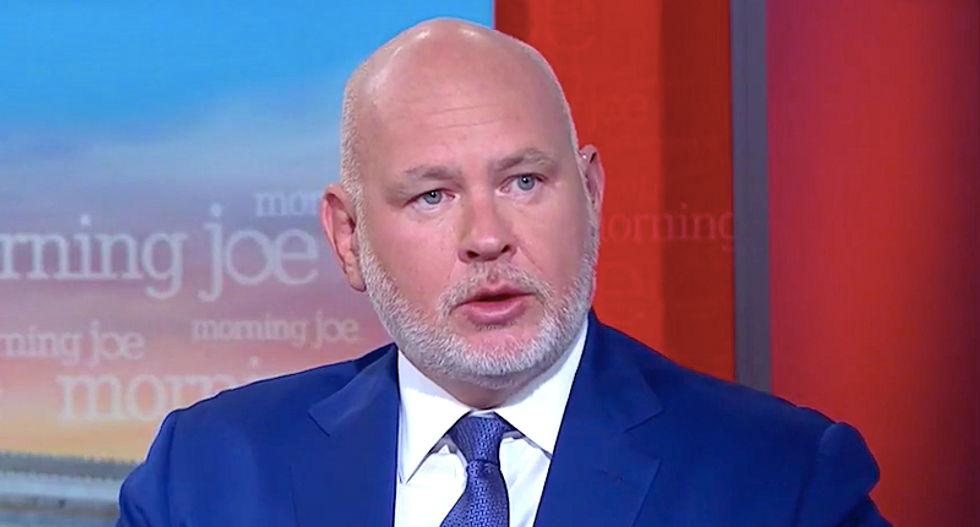 Former Republican strategist Steve Schmidt called out his old party for "lying" about President Donald Trump's actions toward Ukraine to distract from an "unprecedented" extortion scheme.

Schmidt appeared Tuesday on MSNBC's "Morning Joe" to make predictions about the upcoming public impeachment hearings, and he said witnesses would tell a tale of sordid corruption.

"The American people will see when this begins to play out publicly is an act of corruption unprecedented in its magnitude and its severity," Schmidt said. "What we see is the president of the United States extorting a foreign head of state, withholding congressionally approved military assistance to a nation that has a hot war with the Russians on the eastern front, for the purposes of getting dirt on the president's political opponent."

"There has never been in the entire post-World War II period of history, from Truman through Obama until Trump, there has never been an act of corruption by an American president quite like this," he added. "It is extraordinary and severe."

Host Joe Scarborough interrupted to ask a rhetorical question intended to shame the GOP he has left, as well.

"I'm sorry to interrupt you, it's not like me to do that," Scarborough said, laughing. "You say this is the first time this has ever happened, and yet Republicans, our former party, members of our former party are going on TV telling Americans that this happens all the time, this is what presidents do. What would you say to those Republicans who are lying to the American public, who are suggesting that every president before the 45th was just as corrupt as Donald J. Trump?"

"What this was was an extortion attempt," he added. "This was a shakedown by our dime-store Mussolini in the Oval Office."