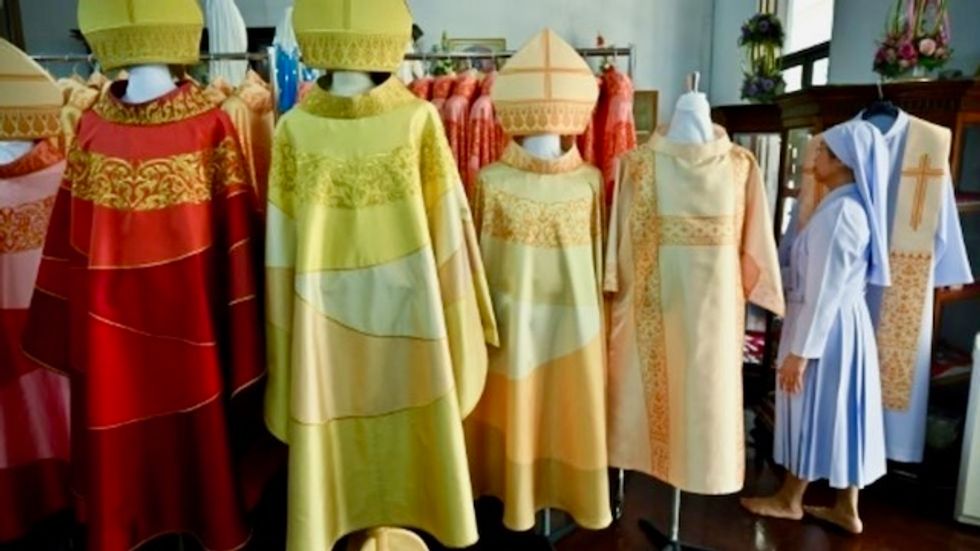 Sewing machines whir in a Bangkok convent as workers feverishly finish silk robes in brilliant golds and reds, made especially for Pope Francis and his entourage visiting Thailand this month.

The whirlwind November 20-23 trip will see the head of the Catholic Church meet top officials, host masses and visit the Catholic faithful in the Buddhist-majority country.

Seamstresses at the Praharuthai Convent in Bangkok are working hard ahead of the trip to ensure Pope Francis and his bishops, deacons and priests are decked out in the country's finest threads.

"I feel happy and very proud that our convent has been selected to do this most honourable job," said Sister Sukanya, who oversees the tailoring.

She and her team of about a dozen seamstresses have been working long days for two months on the more than 200 robes, many stacked neatly in the convent next to round handmade hats.

The two most important pieces -- two matching robes for the pontiff -- are ready to go, displayed proudly side-by-side on a pair of mannequins.

Embroidered with an intricate "kanok" pattern -- a ubiquitous Thai motif seen on clothing, furniture and artwork -- the custom-made gold and yellow design will be worn by the pope at his first mass on November 21.

The following day he's set to sport a nearly identical robe in red and gold colors.

Thailand is renowned for its silk and the convent was selected for the job because it has been making custom-made religious garments for generations.

For the sisters at Praharuthai Convent, the job is an honor of a lifetime -- and a chance to show off traditional tailoring.

"Our Thai style is a beautiful creation," Sister Saengpradab told AFP, as seamstresses hunched under a Jesus statue nearby, measuring, cutting and sewing reams of silk.

It has been nearly four decades since a pontiff visited Thailand, and the trip will mark the 350th anniversary of the first official mission to the country.

The Pope is set to meet Thailand's king and prime minister, hold two masses -- and reunite with his second cousin, who runs a Catholic girls' school there.

Today the country's 388,000-strong Christian community makes up an estimated one percent of the population, the majority residing in the north.

After Thailand, Francis will travel to Japan until November 26, where he will visit Tokyo, Nagasaki, and Hiroshima.

Since Francis' election six years ago, he has made two trips to Asia, visiting the Philippines and Sri Lanka in 2014, followed by Myanmar and Bangladesh in 2017.