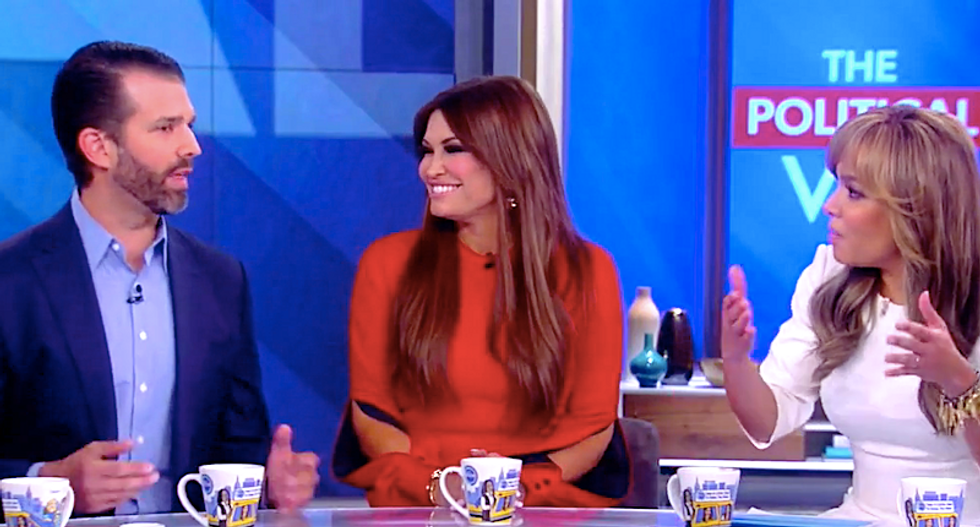 The audience showered Donald Trump Jr. in boos in a contentious appearance on "The View."

The president's eldest son appeared with his partner Kimberly Guilfoyle, a former Fox News broadcaster and senior 2020 Trump campaign adviser, and was immediately met with questions about tweeting out the name of a whistleblower.

"Kimberly, you're a lawyer, we have known each other, you're a former prosecutor," co-host Sunny Hostin said. "Did you advise your boyfriend that it is a federal crime to out a whistleblower?"

Guilfoyle said she didn't tell him that was a crime, but she agreed it was a bad idea.

"I did come out of the bathroom and say, 'I left you alone for 10 minutes -- what happened?'" Guilfoyle said.

Trump Jr. argued that was only a crime if the inspector general revealed the name, but Hostin pushed back.

Trump Jr. insisted that was not accurate, but Hostin wouldn't give an inch.

"My law degree says it is," she said.

The president's son allowed that tweeting out the name was maybe imprudent, but he argued it was necessary to defend his father.

"We talk about transparency," he said. "The president of the United States released the transcript of exactly what happened in that phone call. The whistleblower is giving his opinion or her opinion of what transpired."

Hostin was glad he brought up the July 25 phone call that prompted the whistleblower complaint, but Trump Jr. abruptly changed the subject back to his tweet.

"I don't regret doing it," he said. "I shouldn't have to forego my First Amendment rights. It's out there, I've been reading it for a week, I saw it on the Drudge Report. This is not some secret."

The Trump supporters in the audience cheered, and co-host Joy Behar scolded them.

"This is not some MAGA rally, okay?" she said.

Hostin listed the damning revelations in the call summary, and Trump Jr. insisted there was nothing wrong in the call.

"This is the basis of the impeachment inquiry," Hostin said. "Why is that a sham? Which is what you are calling it."

Trump Jr. said Ukraine wasn't even aware the aid was being withheld to pressure them into investigating Joe Biden, but Hostin said that didn't matter.

The panelists erupted, and co-host Abby Huntsman asked why EU ambassador Gordon Sondland changed his story to show the aid was withheld to pressure Ukraine -- and Trump Jr. offered a self-pitying excuse.

"He's afraid of being attacked, like so many of us have, by a vicious left that's running a one-sided campaign," Trump Jr. said.

The Trump supporters cheered, but they were soon drowned out in a cascade of boos.