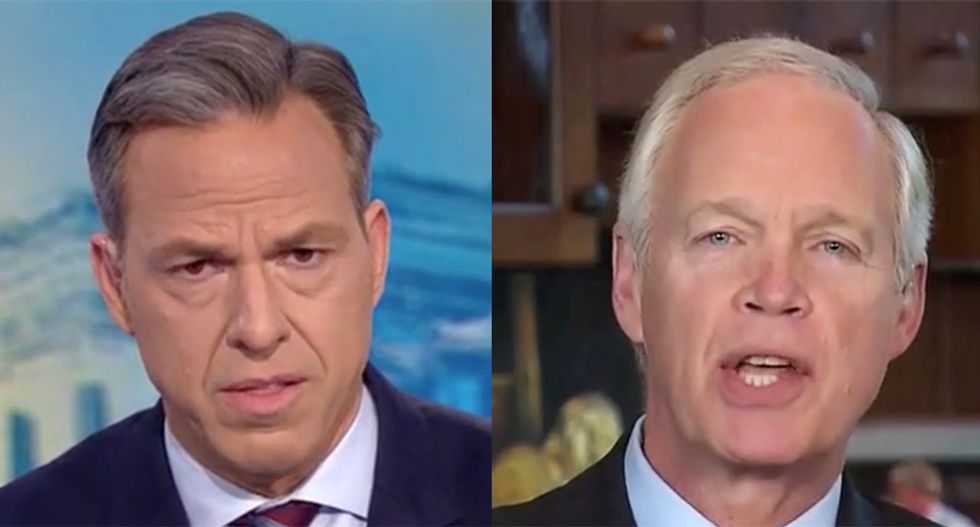 At the end of an exceedingly long and contentious interview with Sen. Ron Johnson (R-WI), CNN host Jake Tapper flat-out told the Republican that he was lying when he repeated Ukraine talking points provided to him by President Donald Trump.

A great deal of the conversation on CNN's State of the Union focused on the influence acting White House Chief of Staff Mick  Mulvaney had in holding up aid to the war-torn country.

"Doesn’t it concern you that Mick Mulvaney -- it has been asserted by [Ambassador] Gordon Sondland -- that Mick Mulvaney was saying they can’t get this military aid or a White House meeting unless they publicly announced these corruption investigations which are about Burisma and the Bidens. That doesn’t concern you at all?" Tapper asked.

"Well, from my standpoint, I understand that most of President Trump’s advisers wanted the military aid released," Johnson parried. "And they were trying to figure out in some way shape or form to convince President Trump to approve that release. That's what I was trying to do in my phone call to him on August 31st. So I don’t have a problem with advisers trying to figure out some way shape or form to convince the boss to do this. But the relevant question is —."

"Was this a political investigation into his opponents —," the CNN host interrupted.

"When I raised the issue he vehemently and angrily denied there was any kind of condition to release that," the GOP senator replied. "He was concerned about corruption and the fact that Europe doesn’t accept up to the plate and provide as much support as they should because it is in their backyard."

"That is not true," Tapper shot back.

"I’m telling you about my conversation with President Trump," Johnson protested.