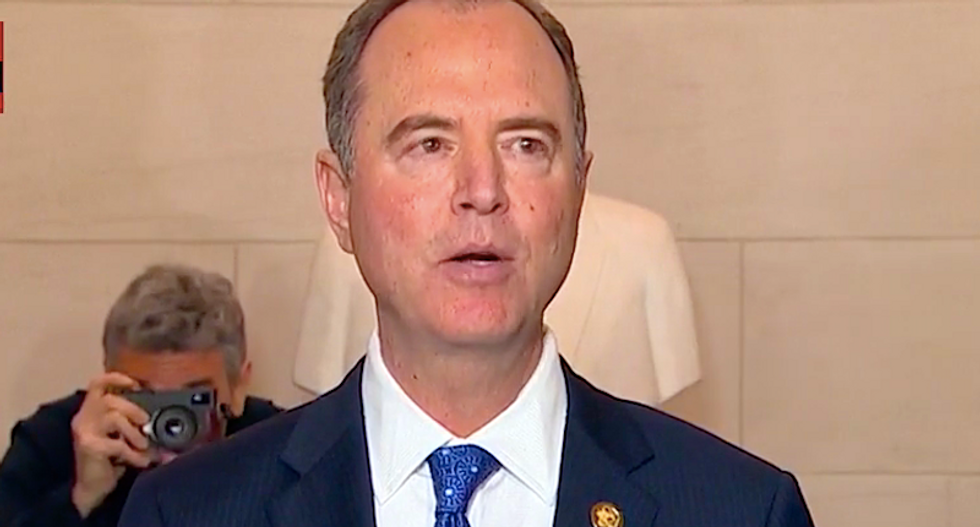 Rep. Adam Schiff (D-CA) said the "veneer has been torn away" from the White House scheme to pressure Ukraine into helping President Donald Trump's re-election campaign.

"This is among the most significant evidence to date and what we have just heard from Ambassador Sondland is that the knowledge of this scheme, this conditioning of the White House meeting, of the security assistance to get the deliverable that the president wanted, these two political investigations that he believed would help his re-election campaign was a basic quid pro quo," Schiff said.

"It was the conditioning of official acts for something of great value to the president, these political investigations," the chairman added. "It goes right to the heart of the issue of bribery, as well as other potential high crimes or misdemeanors."

Schiff warned that other senior administration officials were directly implicated by Sondland's testimony.

"We also have heard for the first time that knowledge of this scheme was pervasive," Schiff said. "The secretary of state (Mike Pompeo) was aware of it, the acting chief of staff (Mick) Mulvaney was aware of it, and, of course, at the very top, Donald Trump through his personal lawyer and others was implementing it, and so this I think only goes to underscore just how significant the president's obstruction of this investigation has been."

"We now can see the veneer has been torn away," he added, "just why Secretary Pompeo and President Donald Trump do not want any of these documents provided to Congress because apparently they show, as Ambassador Sondland has testified, that the knowledge of this scheme to condition official acts, the White House meeting and $400 million in security assistance to an ally at war with Russia was conditioned on political favors that the president wanted for his re-election. So I think a very important moment in the history of this inquiry."

The megaship which blocked Egypt's Suez Canal and crippled world trade for nearly a week has been "seized" on court orders until the vessel's owners pay $900 million, canal authorities said Tuesday.

The 200,000-tonne MV Ever Given got diagonally stuck in the narrow but crucial global trade artery in a sandstorm on March 23, triggering a mammoth six-day-long effort by Egyptian personnel and international salvage specialists to dislodge it.