'Time out!': CNN's Camerota forced to repeatedly cut off Trump defender for blurting lies about impeachment 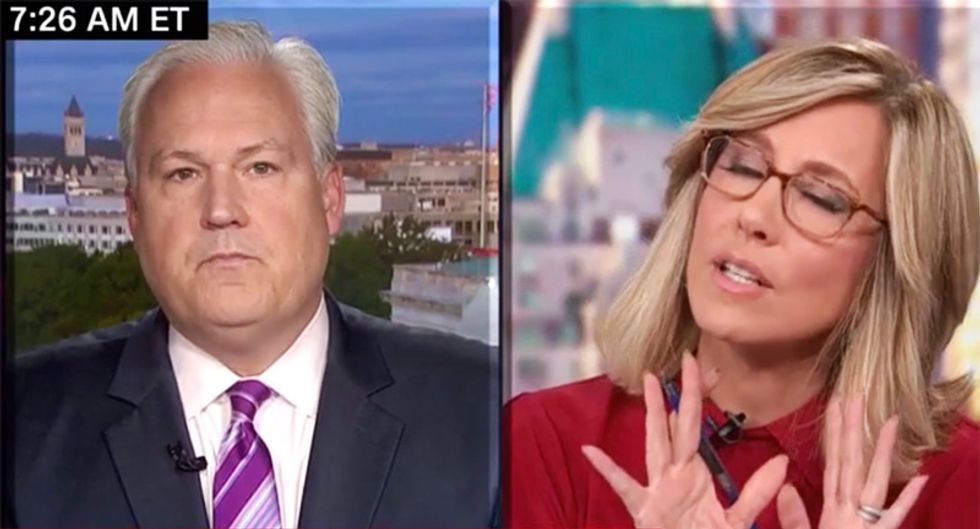 A battle broke out between "New Day" host Alisyn Camerota and conservative Matt Schlapp over impeachment Friday morning with the CNN host having to repeatedly cut off the Donald Trump defender and call him out on lies and misrepresentations about the proceedings.

Appearing on the panel with CNN commentator Ana Navarro, Schlapp continually claimed there was no reason to impeach Donald Trump because, as he claimed, he had committed no crimes which led Camerota to have to explain that impeachment is not limited to actual criminal wrongdoing.

Things got off on the wrong foot after Schlapp stated, " [House Speaker] Nancy Pelosi has said all along that she wouldn't move on starting an impeachment process unless it would be overwhelming bipartisan and let's face it, that's not where it is in the House of Representatives," only to have the CNN host cut him off with, "Fact check: she didn't say overwhelmingly partisan. "

Undeterred, Schlapp continually spoke over the host with White House spin, at one point throwing Sen. Lindsey Graham (R-SC) under the bus over his critical comments about the president's wrongdoing.

"When I say we had a good day," Schlapp said of Thursday's impeachment vote, "It's not because it is good that the Democrats, and only Democrats want to impeach the president. I actually think what is good about it, if there are no crimes and if they don't come forward with articles that show any criminality."

"It doesn't have to be a crime," the host reminded him.

"You got to talk for two straight minutes, Alysin, let me talk," the conservative insisted.

"I'm not lying, name one lie," he fired back. "If you think there is a crime, you give me the code right now. Give me the code. What's the crime? Don't say I'm lying."

"It doesn't have to be a crime, you know that," she tried to explain. "Why don't you hear the video of Lindsey Graham saying over and over again--"

"Lindsey Graham is wrong," he blurted while talking over her. "He isn't one of the Founding Fathers and he is a great guy and all but he didn't write the Constitution."