‘Traitor’: Trump faces ‘lock him up’ chants as he speaks at Veterans Day event in New York City 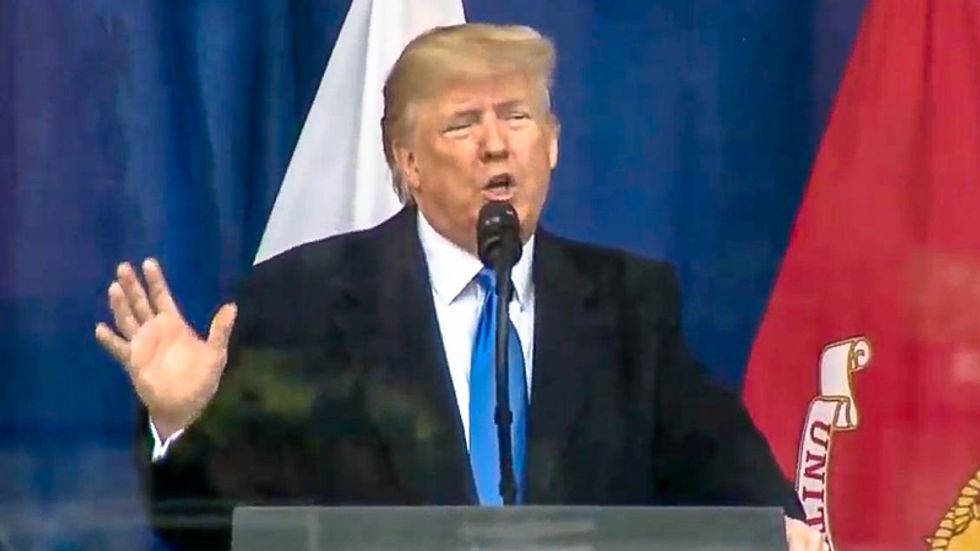 Demonstrators in New York City called for the prosecution and imprisonment of President Donald Trump as he spoke at a Veterans Day event.

The president on Monday spoke in his hometown of New York City ahead of the Veterans Day parade. Although the president was behind bulletproof glass, protesters chanted "lock him up" loud enough for him to hear. Chants of "impeach and remove" could also be heard.

Watch the video and read the reports below.

Protesting Trump at the NYC Veteran’s Day Parade. Trump deports vets, fires them (Vindman), and privatizes their he… https://t.co/nSZCjPbBCU
— Rise and Resist (@Rise and Resist)1573486913.0

Trump speaks at Veterans Day event in NYC. Protestors nearby are chanting “lock him up” and “traitor” https://t.co/MhqeDa4xOw
— Zeke Miller (@Zeke Miller)1573487028.0

Incredibly loud protests outside the Trump speech along Fifth Avenue, with whistles, chants of "Lock him up!"
— Maggie Haberman (@Maggie Haberman)1573486568.0

Trump supporters and protesters mix it up at the start of the Veterans Day Parade. Some ugly verbal exchanges. ⁦… https://t.co/gvq8rgxUN2
— Michael O'Keeffe (@Michael O'Keeffe)1573486638.0