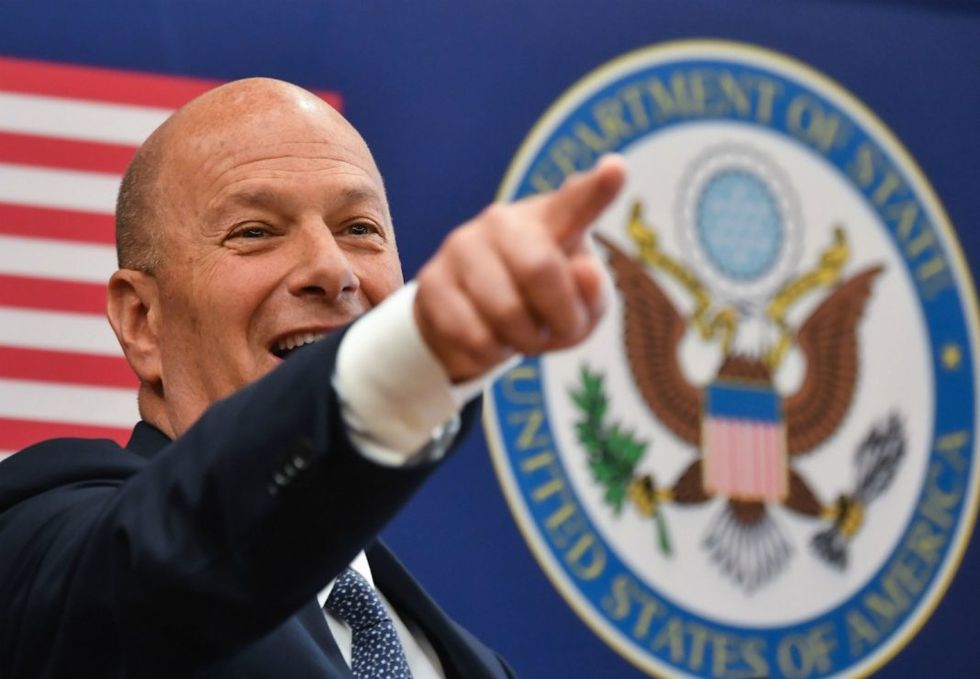 President Donald Trump attempted to distance himself Wednesday from his hand-selected European Union Ambassador Gordon Sondland. At the same time, Trump claimed that Sondland’s stunning testimony, which alleged that the president had ordered a “quid pro quo” with Ukraine, in fact, vindicated him.

“Was there a ‘quid pro quo’?” Sondland said in his testimony to the House Intelligence Committee Wednesday. "The answer is ‘yes.’”

Sondland further claimed that “everyone was in the loop” and all actions were “directed” by the president.

After Sondland threw Trump under the bus in his testimony, the president tried to distance himself from his own ambassador.

“I don’t know him very well. I have not spoken to him much. This is not a man I know well,” Trump told reporters during Sondland’s testimony. “Seems like a nice guy, though. But I don’t know him well.”

Trump, who previously claimed to “hardly know” Sondland, said that the ambassador he personally appointed “supported other candidates” in the election, though he acknowledged that Sondland “came in late” to his camp. Trump did not mention that he appointed Sondland after the billionaire hotel developer donated $1 million to his inaugural fund. Trump also appeared in photos with Sondland, while multiple witnesses have testified that Sondland spoke with Trump on the phone multiple times.

“If you weren’t fake news, you’d cover it properly,” Trump snapped at reporters.

Despite trying to distance himself from his own ambassador, Trump insisted that Sondland’s testimony actually vindicated him while ignoring the highly damaging parts of the official’s testimony.

Trump cited one phone call on which Sondland asked, “What do you want from Ukraine?” Trump, in a “bad mood,” allegedly snapped back, “I want nothing from Ukraine.”

“I would say that means it’s all over,” Trump declared. “Just happened, to which I turned off the television.”

Trump took no questions from reporters and stormed off after reading his statement from handwritten notes.

“This record shows definitively no quid pro quo, which is the same as no bribery,” the former mayor of New York tweeted. “END OF CASE!"

The pair’s take on Sondland’s testimony ignored the ambassador’s explicit admission of a “quid pro quo” — which according to Giuliani is “the same” as “bribery” — and other damning revelations the revealed at Wednesday’s public hearing in the impeachment inquiry. Sondland largely confirmed committee Chairman Adam Schiff’s, D-Calif., narrative on Trump’s pressure on Ukraine.

“You testified that that meeting was conditioned was a quid pro quo for the two investigations the president wanted. Is that right?” Schiff then asked.

“And everybody knew it?” Schiff said.

“Now that White House meeting was going to be an official meeting between the two presidents?” Schiff asked.

“So an official act?” Schiff asked.

“In order to perform that official act, Donald Trump wanted these two investigations that would help his re-election campaign?’ Schiff asked.

“I can’t characterize why he wanted them,” Sondland replied. “All I can tell you is this is what we heard from Mr. Giuliani.”

“You had to get those two investigations if that official act was going to take place right?” Schiff asked.

“[Zelensky] had to announce the investigations. He didn’t actually have to do them, as I understood it,” Sondland answered.

“Again, through Mr. Giuliani, we were led to believe that’s what he wanted,” Sondland said.

“And so that official act of that meeting was being conditioned on the performance of these things the president wanted as expressed both directly and indirectly through his lawyer Rudy Giuliani?” Schiff asked.

"There will be articles of impeachment. I think we’ve known that. I think it was just confirmed today, and then substantively what we heard from the chairman just now is it’s over," Starr told the right-leaning network. "We now know . . . This is his position. We now know that the president, in fact, committed the crime of bribery. The something of value — that's litigable. But, I think articles of impeachment are being drawn up if they haven’t already been drawn up.”