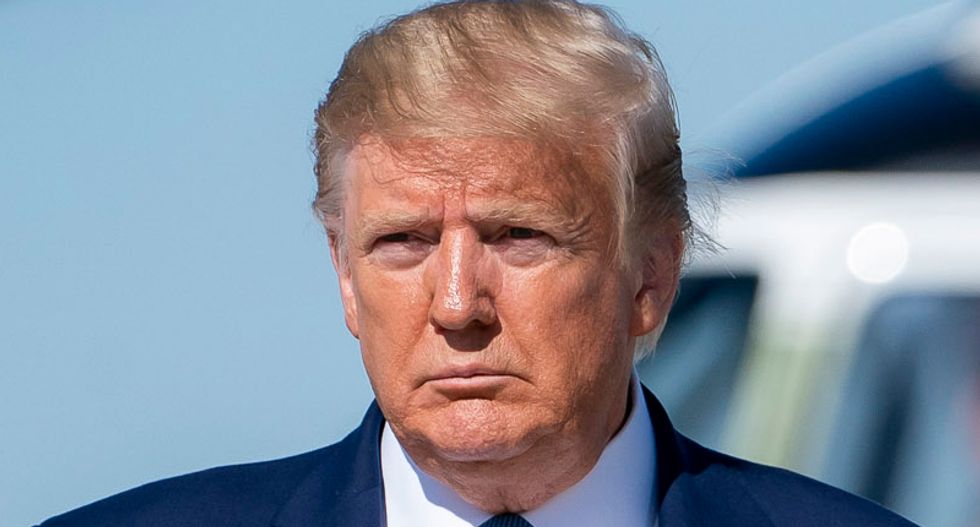 Donald Trump signaled in a trio of Halloween night tweets that criminal investigations into his New York tax and business filings are vexing him. Knowing how Donald's mind works, my bet is that he just learned he is getting closer to civil lawsuits or indictment

New York law gives prosecutors powerful tools to pursue Trump, as DCReport told readers more than a year ago. And while Trump can exert some control over the federal Justice Department through Attorney General William Barr, a Trump appointee who acts as if he is Trump’s personal lawyer, Trump has no power over state and local prosecutors.

Trump is a man so uncomfortable in his own skin that he cannot keep quiet about what vexes him. His impulsive twitter storms, many in the wee hours, often foreshadow news that breaks days or weeks later.

Making Florida his residence will not save Trump from any tax civil lawsuits, criminal charges or from paying past taxes he owes in New York.

For weeks, his conduct has shown he is terrified of the New York investigations, seeking to shut one down with outlandish claims that he is above the law and cannot be investigated by any prosecutor or Congress so long as he is president.

Trump insists he has never done anything wrong. He complains that he is the victim of various witch hunts, including that the IRS is unfair to him because he claims to be a Christian, a bias charge that he doubled down on this year. That claim, true or not, gives House investigators good reason to investigate IRS handling of his tax returns. 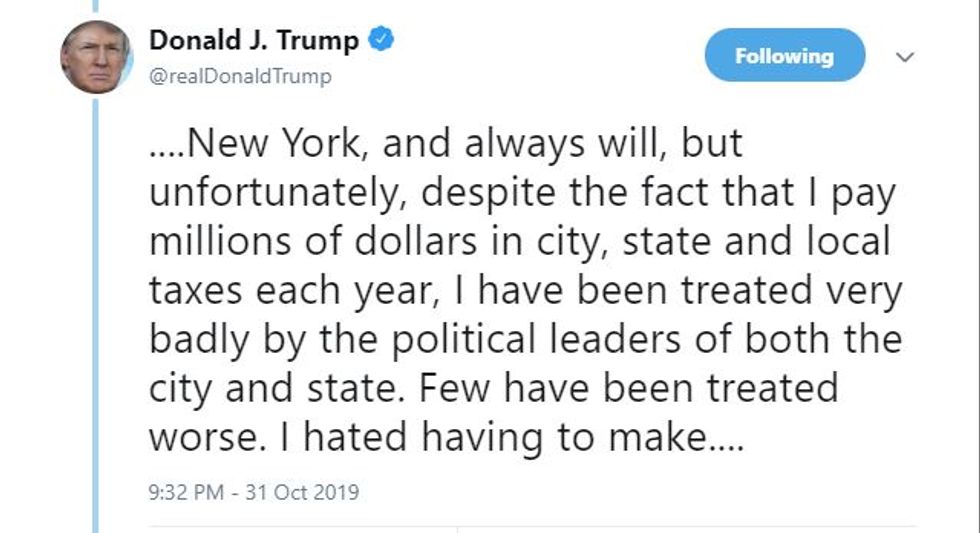 The signal that Trump fears the New York tax inquiries began when Maggie Haberman, a White House correspondent for The New York Times, asked the reasons that more than a month ago Trump quietly filed a declaration that Mar-a-Lago is his primary residence.  He ran for office using 721 Fifth Avenue, the address of Trump Tower in Manhattan.

In three late-night tweets confirming Haberman's report, Trump complained that “despite the fact that I pay millions of dollars in city, state and local taxes each year, I have been treated very badly by the political leaders of both the city and state. Few have been treated worse.”

His next tweet added, “I hated having to make ... this decision, but in the end, it will be best for all concerned.”

There is no verifiable evidence that Trump pays any income taxes in New York, only property taxes.

Making Florida his residence will not save Trump from any tax civil lawsuits, criminal charges or from paying past taxes he owes in New York. So long as Trump has substantial income from New York he will have to file a non-resident state tax form. He likely will also have to file in Connecticut, New Jersey, Illinois and California, among other states where he has businesses.

That's what makes his Oct, 31 tweets so intriguing. Making Florida his primary residence will have minor effects on lowering whatever taxes Trump may owe, so why bring it up?

Moving to Florida could help Trump sell his base on the idea that he is fleeing persecution by a hateful cabal of liberal New Yorkers egged on by journalists in the nation's media capital and who Trump calls “the enemy of the people.”

It could also help him shield his personal residence if he files personal bankruptcy as customers stay away from his golf courses and hotels, including the one a few blocks from the White House, the 99-year operating lease having just been put up for sale.

In flocks of tweets and angry public statements Trump has denounced the New York investigations into his taxes; his eponymous foundation, which the state shut down as a fraud; and his business filings including hush-money payments to two younger women; and his best-known fraud, Trump University.

One inquiry is by Letitia James, who won election last year as New York state attorney general by promising to aggressively investigate Trump’s finances. The office began several dozen lawsuits against Trump before she took office in January. She has expanded on those actions.

The other probe is by a grand jury empaneled by Cyrus Vance Jr., the Manhattan district attorney, who had been something of a Trump ally. After a major Trump donor visited Vance in 2012, he quashed an investigation into Ivanka Trump and her husband Jared Kushner just before they were to be indicted for fraud. Both are now federal employees working in the White House.

In August, a Vance grand jury subpoenaed  Trump, the Trump Organization and Mazars USA, the accounting firm which does Trump’s books and tax filings.

In September, Trump sued to stop Vance and block Mazars from complying with the subpoena. A federal judge quickly dismissed the lawsuit as baseless. Trump appealed.

In October, his lawyers made the outlandish claim that even if he shot someone he would be immune from any investigation. The federal Second Circuit Court of Appeals has yet to rule on that. During the campaign, Trump said he could shoot someone on Fifth Avenue and not lose a single vote, a lawless statement far outside of any previous presidential campaign.

Trump’s broken campaign promise that he would release his tax returns, as every other president since Nixon has done, together with his aggressive efforts to block investigations by both New York authorities and House Democrats, raises an obvious question. If Trump has done nothing wrong, as he insists, then why fight disclosure to law enforcement? Why not just show the records, which would make the issue go away?

The answer is that abundant evidence exists that Trump is a veteran tax cheat.

He lost two civil income tax fraud trials, as I reported in The Making of Donald Trump, over his 1984 New York state and city tax returns. In both cases, Trump took more than $600,000 in business expenses against zero income as a “consultant.” Trump could not produce a single receipt or other records to justify the deductions.

Jack Mitnick, for decades the tax lawyer and tax accountant for Trump and his father Fred, testified that while his photocopied signature was on the municipal tax return “we did not” prepare that return. That’s what the IRS calls a “badge of fraud.”

Timothy L. O’Brien, who saw Trump’s tax returns while writing his book TrumpNation, has urged authorities to look into five areas of Trump’s taxes. While O’Brien cannot reveal exactly what he learned because of a court order, his many public statements make clear that he believes Trump is terrified at the prospect of his returns being made public. O’Brien’s book showed that Trump’s claims of billions of dollars of riches are fantasy, reporting in line with my 1990 report showing Trump was no billionaire.

A year ago, The New York Times ran an exhaustive account of years of tax cheating by Trump and his family. The investigation was aided by a vast trove of internal records that Trump insiders gave the newspaper. The paper stated flat out that Trump had engaged in tax fraud, a remarkable concessionary statement for any newspaper, but especially one as cautious as The Times.

Featured image: Holed up at Mar-a-Lago, Trump could keep his Florida residence should he file personal bankruptcy as a result of the multiple legal issues he's facing. (Trump Organization)