Trump Organization boasts millions could be made from foreign governments: Sales brochure 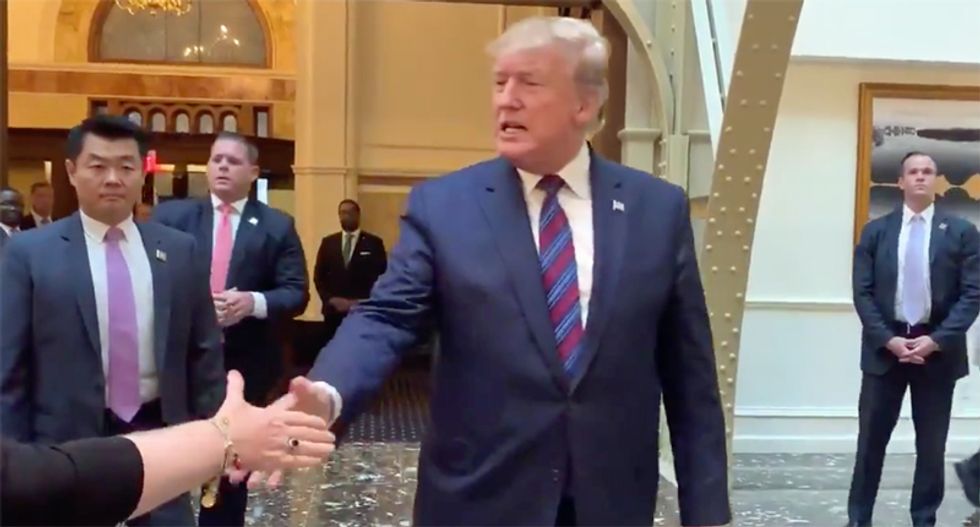 The Trump Organization insists the president's family-owned business is losing money because it won't solicit foreign business -- but its pitch to investors tells another story.

President Donald Trump's family business is trying to sell off its lease to the Trump International Hotel in Washington, and the company produced a glossy brochure to lure investors that boasts of its foreign visitors, reported CNN.

"Tremendous upside potential exists for a new owner to fully capitalize on government related business upon rebranding of the asset," says the 46-page investor pitch.

The Trump Organization brochure claims the hotel lost $9.2 million in revenue last year by turning away business from foreign governments, but the pitch is an explicit acknowledgement of how reliant Trump International is on foreign business.

"Though it includes specific numbers of how much money it turned away from foreign governments," CNN reported, "the pitch does not include figures for how much the hotel has accepted, despite reports showing it has become a magnet for foreign officials. Nor does it provide actual or historical financial performance data for the hotel, which is named in multiple lawsuits accusing Trump of using the property to illegally profit off his presidency."

Guests from Saudi Arabia, Malaysia and Kuwait have stayed in the hotel or held events there, as well as Trump cabinet members, GOP fundraisers and the prime minister of Romania.

The brochure also boasts that Amazon, whose CEO Jeff Bezos is one of the president's most hated enemies, could help pump money into the hotel after locating its second headquarters nearby in northern Virginia.

The investor pitch instead offers financial projections for 2020-2026 based on a sales and marketing strategy specifically targeting foreign governments.

Trump Organization predicts a 65-percent jump in revenue from 2018-2020, based on a fairly conservative projected occupancy rate of 68.3 percent.

The family-owned company is hoping to get more than $500 million for the Trump International, which would be one of the highest prices ever paid for a hotel in Washington.