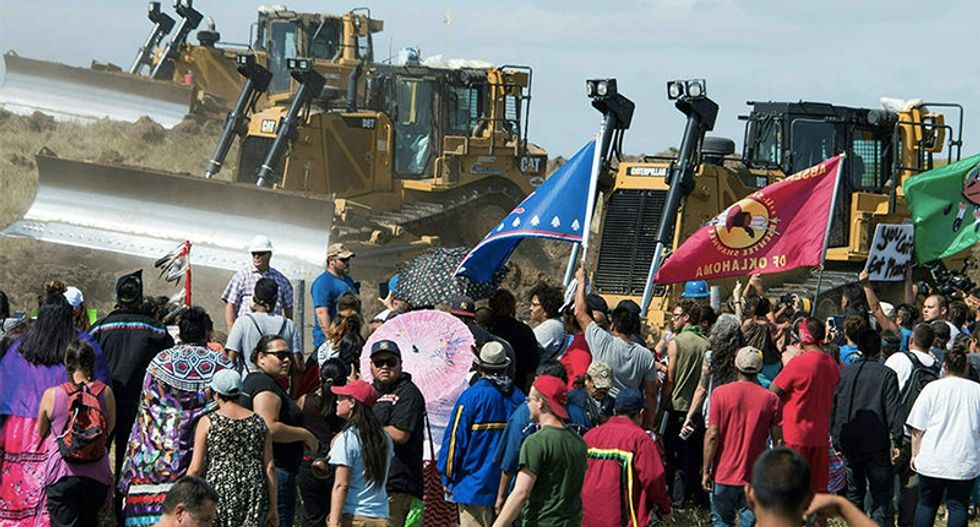 The months of protests over construction of the Dakota Access pipeline spurred a wave a state laws that ratchet up penalties for protesting or interfering with fossil fuel infrastructure. Many were based on model legislation promoted by the industry-backed American Legislative Exchange Council. Credit: Robyn Beck/AFP/Getty Images

According to a new proclamation from the White House, President Donald Trump is now also refusing to acknowledge Native American Heritage month, instead of turning it to focus on the Pilgrims and the Natives they met upon arriving.

Trump has shown anti-Native tendencies since the days he forced the Navajo code talkers to accept an award under the portrait of former President Andrew Jackson, who enforced the Trail of Tears. He even used his favorite anti-Native, racist slur to them while there.

The president is hardly a friend to Native communities. He consistently uses the name of a historic Native figure as a racist slur, against Sen. Elizabeth Warren (D-MA). He's refused to recognize that the Standing Rock Sioux Tribe owns and controls sacred lands where Trump wants to allow the Dakota Access pipeline to drive through.

Reducing Bears Ears Monument was another slap in the face to Native communities. Despite efforts from Tribes, Trump destroyed the protection of the 200,000 acres, saying he wants to open the Native lands up to oil and gas drilling. He's also working to remove other Native lands previously placed into a trust. The National Geographic did an extensive piece on what the lands mean to Native people.

On September 7, 2018, Tara Sweeney, Trump's appointed Assistant Secretary for Indian Affairs, worked to take the Mashpee Wampanoag land in Massachusetts out of the trust. It would be the first time anyone took Native lands out of the trust since the "termination era" in the 1940s-1960s.

You can read Trump's proclamation at the White House site.

"Over 243 years ago, our Founders gathered in Philadelphia, Pennsylvania, at Independence Hall to sign the Declaration of Independence, enshrining in the heart of every American a bedrock principle that all men are "endowed by their Creator with certain unalienable Rights,'" Trump's proclamation begins.

As the First Americans, Native Americans have helped shape the future of the United States through every turn of our history. Today, young American Indians and Alaska Natives embrace open-ended possibility and are determining their own destinies. During National Native American Heritage Month, we pledge to maintain the meaningful partnerships we have with tribal nations, and we renew our commitment to our nation-to-nation relationships as we seek to give all our children the future they deserve.