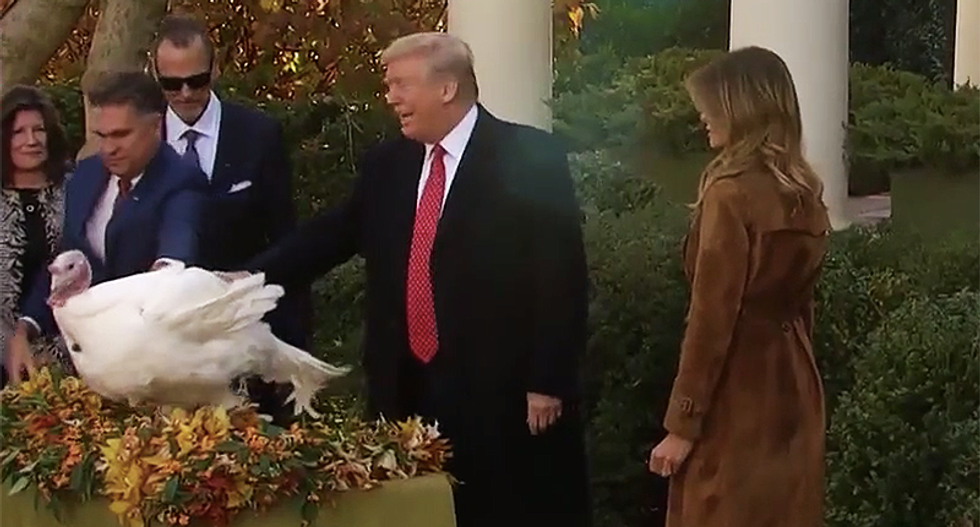 President Donald Trump turned his annual turkey pardoning into an attack on his political rivals and the media.

In a speech that told the history of turkey pardoning like a Wikipedia article, Trump borrowed a line from a "West Wing" that he was concerned people might think he was being "soft on turkey."

Trump pardoned turkeys named Bread and Butter, and claimed that they're closely related to vultures.

"This is a strange and misunderstood tradition that doesn't go back as far as you might think and has been sustained by a special interest group — the turkey lobby," reported NPR. "The National Turkey Federation, whose website is literally EatTurkey.org, sponsors the event and has spent almost $3 million on lobbying efforts since 1998, according to a search of the Center for Responsive Politics' lobbying database."

Trump's speech went on to "joke" that hundreds of people have been called to testify in Rep. Adam Schiff's (D-CA) depositions. In fact, it's less than 20 people.

"Thankfully, Bread and Butter have been specially raised by the Jacksons to remain calm under any condition, which will be very important because they've already received subpoenas to appear in Adam Schiff's basement on Thursday," Trump joked. "True. Hundreds of people have. It seems the Democrats are accusing me of being too soft on turkey. But Bread and Butter, I should note that unlike previous witnesses, you and I have actually met. Very unusual. Very unusual. In any event, I expect this pardon will be a very popular one with the media. After all, turkeys are closely related to vultures."

"I don't know if I like that line, but there's a little truth to it," Trump went on.

Former President Barack Obama really hated the turkey pardoning and told his daughters that if he had to be there, they did too. He frequently mocked it.