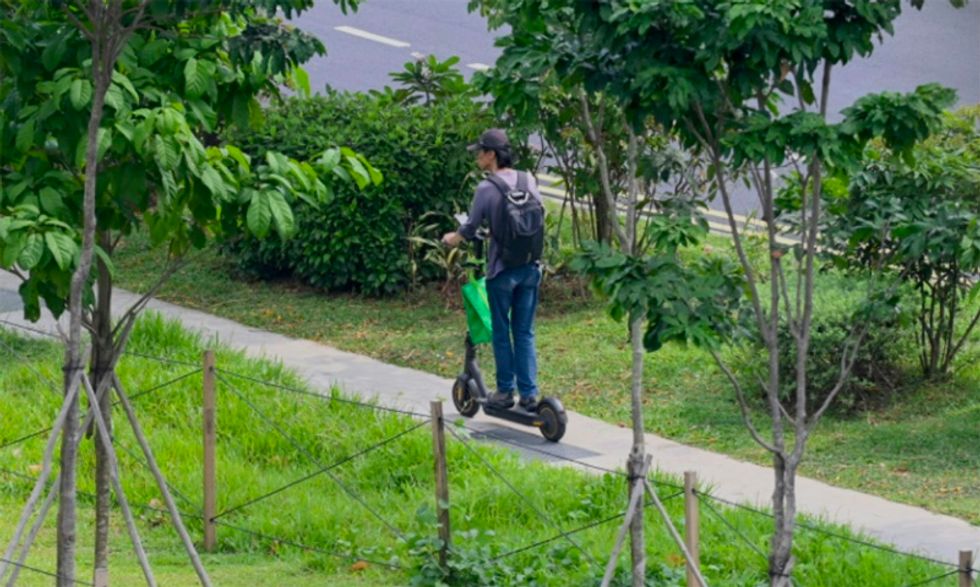 Tiny Singapore had embraced electric scooters in a big way, but deaths and fires linked to the two-wheelers have prompted authorities to introduce tough rules that could put a brake on their runaway success.

The contraptions have popped up in cities worldwide but pedestrians in many places have come to see the silent machines as menaces, and authorities have been scrambling to regulate them.

Tens of thousands flooded Singapore, becoming particularly popular among commuters and workers delivering food, but apartment fires blamed on charging devices and the death of an elderly cyclist after a September collision stoked public anger.

Last week, officials announced a ban on the trendy two-wheelers on all footpaths.

To start with, most riders caught breaking the rule will be given a warning but from January, offenders face being jailed for up to three months and fined.

The move surprised observers after a panel advising the government had recommended weaker measures, such as a mandatory theory test -- and angered some who have come to rely on the scooters.

"It is definitely over-regulation," Venkata Goruganthu, who rode his e-scooter to his office in the business district every day, told AFP.

"There are car accidents and people are dying, are we going to ban cars on the streets now?"

The 41-year-old technician will now have to commute by public transport, which will take him 45 minutes -- twice as long as a scooter ride.

But many others approved of the effort to rein in the scooters, which now number about 100,000 in the space-starved country of 5.7 million.

AFP / Roslan RAHMAN Many Singaporeans approve of the effort to rein in the scooters, which now number about 100,000 in the space-starved country of 5.7 million

"People are not responsible, they are reckless," Vasukie Mayandi, a 51-year-old bank worker, told AFP.

"They feel they want to move somewhere fast, but they're not considering others who are using the same pathway."

E-scooters were already banned from Singapore's roads but they are now prohibited on all pavements and other footpaths, and can only be used on cycle paths and a network of routes connecting parks.

It drastically reduces the area where people can ride the contraptions -- Singapore has about 440 kilometres (275 miles) of cycle paths compared with 5,500 kilometres of footpaths. Officials, however, say cycle paths will be extended to cover 750 kilometres by 2025.

Following the announcement, regional ride-sharing giant Grab said it was suspending its scooter-sharing set-up in Singapore while the government said it would reject applications by other firms hoping to start such services.

Singapore is just the latest country trying to get control of the scooters.

Last week, the French government issued new rules, including a ban on using them on pavements -- unless a city permits them in certain areas -- and a 25 kilometre per hour speed limit.

Germany does not allow them on pavements while London has taken the most extreme approach of major European cities, prohibiting the two-wheelers entirely unless a rider has a driving licence, insurance, road tax, a helmet and a number plate.

The hardest hit in Singapore by the new rules is the army of people using e-scooters to deliver food across the city for companies such as Deliveroo, Grab and Foodpanda, although authorities have taken steps to help.

On Friday, the transport ministry said the government and companies were offering grants for e-scooter delivery riders to switch to other devices including regular and power-assisted bicycles.

Benjamin Goh has already changed to a bike for his food delivery job -- but said his income would be affected as cycling is more exhausting, meaning he can complete fewer orders.

"It's very tiring for me to use a bicycle," said the 26-year-old single father, adding that he would also end up fatigued and potentially less capable of caring for his young son after work.

Goh said he felt food delivery workers were being punished for the bad behaviour of some recreational riders, but conceded: "I can understand why people hate us."