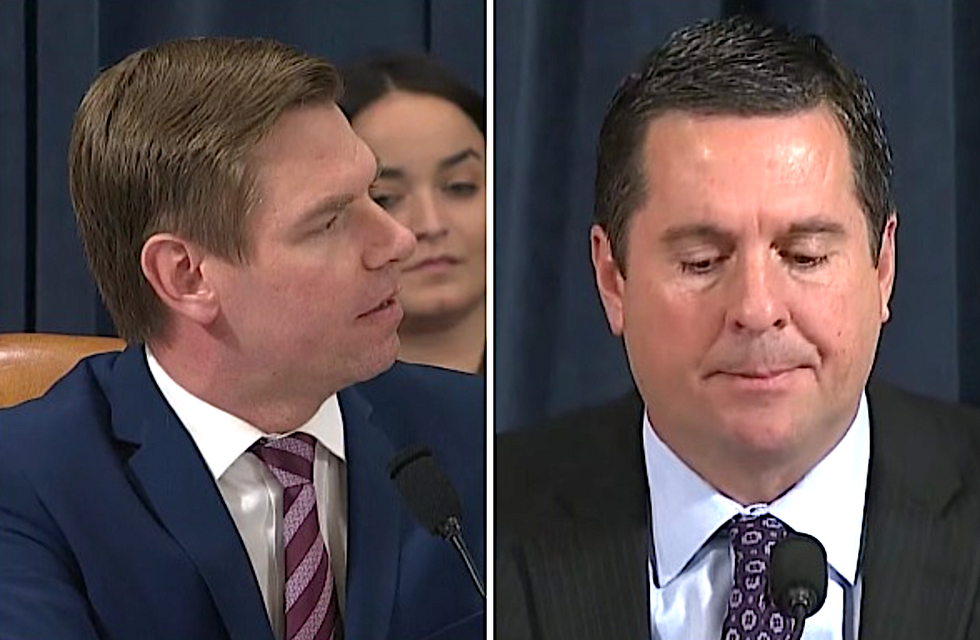 During today's hearing in the House's impeachment inquiry into President Trump, Rep. Eric Swalwell (D-CA) referenced a POLITICO article from last month which reported that a lawyer who worked for Republicans on the House Intelligence Committee when Devin Nunes (R-CA) was the committee’s chairman, fed information on Ukraine to President Trump.

According to the report, Trump believed at the time that Kashyap “Kash” Patel, who had "no discernible Ukraine experience or expertise, was actually the NSC’s top Ukraine expert."

While questioning former National Security Council official Fiona Hill, Swalwell asked if she had ever heard of Patel before, to which Hill replied that she did but it was "in passing," later finding out that he worked for Nunes when she inquired at a later date.

Swalwell then asked Hill if she ever heard the name of the recently indicted Rudy Giuliani associate, Lev Parnas, "who was influencing President Trump and Rudy Giuliani about some of the debunked conspiracy theories you referenced earlier."

"I have heard his name, yes," Hill replied, adding that she was aware that Parnas was indicted for illegal campaign finance transactions.

Swalwell then referenced a Daily Beast story from this Wednesday with the headline, Lev Parnas Helped Rep. Devin Nunes’ Investigations. After asking that the article be entered into the record, Swalwell then turned to House Committee Chairman Adam Schiff.

"Mr. Chairman, you have been falsely accused throughout these proceedings by the ranking members of being a 'fact witness,'" Swalwell said. "Now, if this story is correct, [Nunes] may have been projecting, and in fact, he may be the fact witness if he is working with indicted individuals around our investigation."