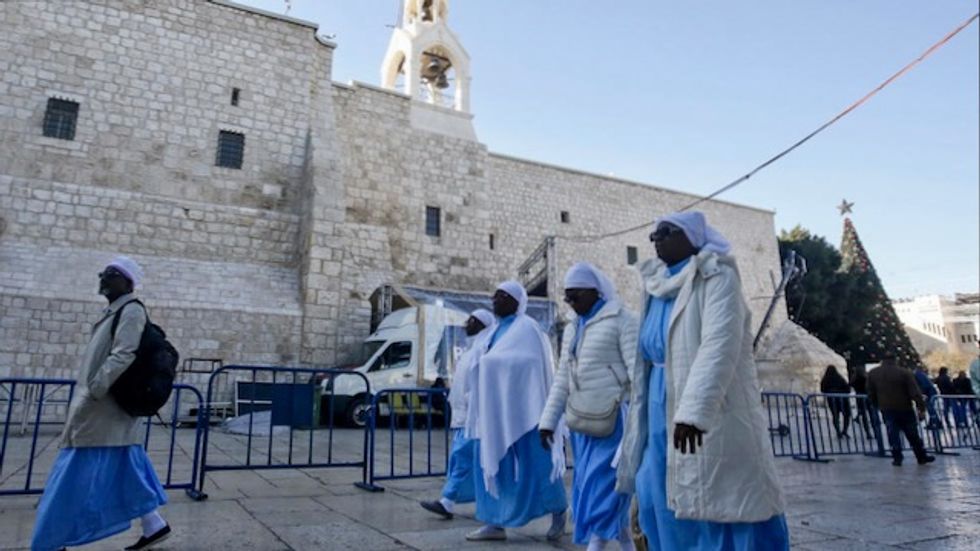 Pilgrims from around the world gathered Tuesday in the biblical city of Bethlehem, revered by Christians as the birthplace of Jesus, to celebrate Christmas in the Holy Land.

Palestinians and foreigners began converging on the "little town" in the Israeli-occupied West Bank from early morning, with Christmas Eve festivities taking place in and around the Church of the Nativity.

Tourists queued to visit the grotto inside the church, believed to be the exact site where Jesus was born, with Ola, a Nigerian visitor, saying it was a "special day."

Outside in the winter sun, hundreds watched as Palestinian scouts paraded to the sound of drums.

"I feel really emotional to be here today, it's wonderful," said Germana, an Italian travelling with her husband and two children.

Archbishop Pierbattista Pizzaballa, apostolic administrator of the Latin Patriarch of Jerusalem and the most senior Roman Catholic official in the Middle East, was due to travel from Jerusalem to Bethlehem on Tuesday morning.

He will lead midnight mass in the Church of the Nativity, with Palestinian president Mahmud Abbas expected to attend.

Bethlehem is close to Jerusalem, but cut off from the holy city by Israel's separation barrier.

The first church was built on the site in the fourth century, though it was replaced after a fire in the sixth century.

This year celebrations were bolstered by the return of a wooden fragment believed to be from the manger of Jesus.

Sent as a gift to Pope Theodore I in 640, the piece had been in Europe for more than 1,300 years before being returned last month, Francesco Patton, chief custodian for the Holy Land, said.

"We venerate the relic because (it) reminds us of the mystery of incarnation, to the fact that the son of God was born of Mary in Bethlehem more than 2,000 years ago," Patton told AFP at the time.

In the square by the church, Palestinian tourism minister Rula Maaya told AFP it had been a good year, with 3.5 million tourists visiting the city.

But fewer Christians from the Gaza Strip were in attendance than in previous years, as Israel granted permits to just around 200 of the some 900 people who applied, said Wadie Abunassar, an adviser to church leaders in the Holy Land.

The Palestinian territories of the West Bank and Gaza are separated by Israeli territory and crossing between them requires hard-to-get permits.

"The Holy Land is not only the site of the birth and crucifixion (of Jesus), it is also the place of resurrection," he told AFP.

"Despite all challenges, difficulties, pain and problems we are facing, we keep the hope in God and people."

Around the world, people were getting ready to ring in the Christmas festivities.

In her traditional Christmas Day message, Britain's Queen Elizabeth II was to describe 2019 as "quite bumpy" after a year of crises in the royal family.

In France, travellers were meanwhile in for more woe in the bitter nearly-three week strike by train drivers fighting government pension reform plans.

The walkout has ruined Christmas travel plans for tens of thousands of French ticket holders unable to reach loved ones in time for Christmas Day.

And in the central Philippines, where Christmas is widely celebrated among the country's Catholics, thousands of people were warned to leave their homes as a severe tropical storm approached.