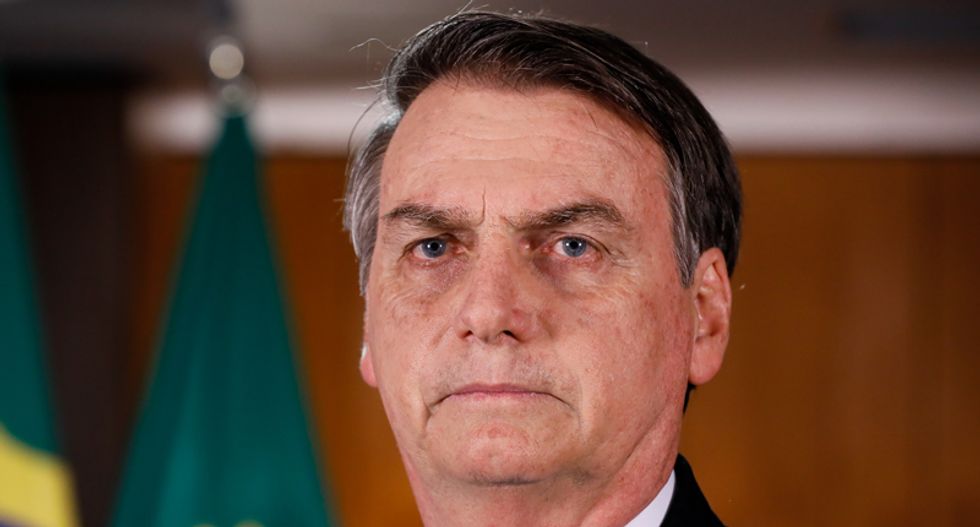 Brazilian leader Jair Bolsonaro was hospitalized Monday after an accident at his home in Brasilia, the latest health scare for the 64-year-old, his office said.

"President Jair Bolsonaro fell at the Alvorada Palace. He was treated by the medical team of the Presidency of the Republic and taken to the Armed Forces Hospital," a presidential spokesman said in a statement published by the G1 news portal.

The Planalto Palace has yet to respond to AFP's request for comment.

According to the statement, Bolsonaro was given a cranial CT scan, "which did not detect any changes."

Institutional Security Minister Augusto Heleno arrived at the hospital shortly after the presidential convoy and told Globo television that Bolsonaro "is fine," but must remain under observation.

The right-wing leader will remain at the hospital for observation for between six and 12 hours, the statement added.

Bolsonaro took office as Brazil's president on January 1. He was seriously injured in a knife attack while campaigning for election last year.

His health has been a subject of concern ever since, and he has undergone several surgeries to treat the wounds he suffered in the stabbing, most recently in September.

Earlier this month, Bolsonaro said he had been examined for skin cancer.

Trump attorney lawyers up — and says she’s willing to cooperate with DOJ in Mar-a-Lago case: report

At least one member of former President Donald Trump's legal team has hired her own attorney — and allies are urging another to follow suit, according to The Washington Post.

Trump attorneys Christina Bobb and Evan Corcoran affirmed to the Justice Department that Trump had handed over all classified records from his Mar-a-Lago residence in response to a May subpoena. But prosecutors said their response was "incomplete" after the FBI searched and found more documents at Mar-a-Lago and cited evidence of "obstructive conduct" in response to the subpoena.

In an interview with Rolling Stone published on Sunday evening, former D.C. Metropolitan Police Officer Michael Fanone delivered an expletive-laden rant against House Minority Leader Kevin McCarthy (R-CA), the likely next Speaker of the House if Republicans win control of Congress in November.

The remarks came during a discussion about Fanone's upcoming memoir, "Hold the Line."

US reality star Kim Kardashian has agreed to pay a $1.26 million fine after unlawfully pushing a cryptocurrency on Instagram without revealing that she was paid to do so, the Securities and Exchange Commission announced Monday.

The agency accused Kardashian, who has 331 million followers on Instagram -- making her one of the top ten most followed people on the global social network -- of failing to disclose that she was paid $250,000 to post about EMAX tokens, the crypto asset security being offered by EthereumMax.