'Calm down': Meghan McCain scolds The View’s audience for being concerned about her outbursts 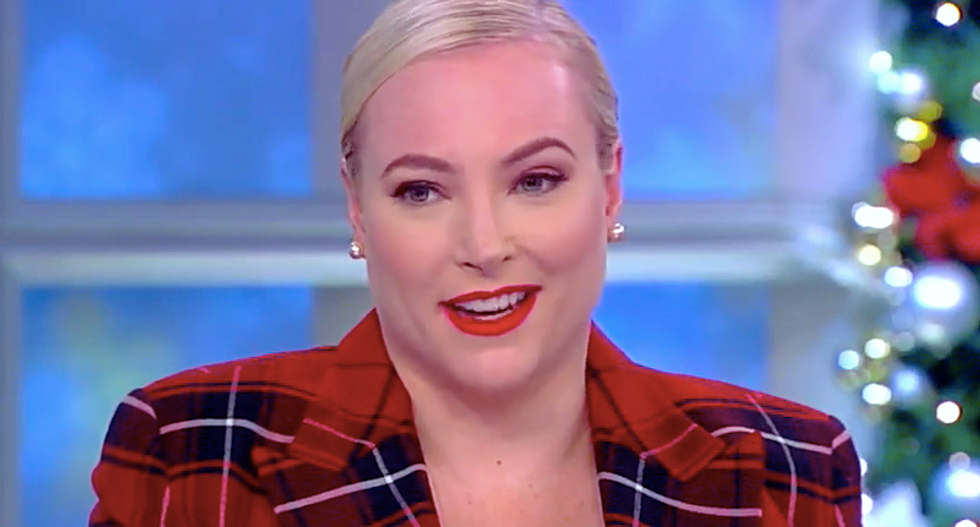 Co-hosts Whoopi Goldberg and Meghan McCain made news Monday with a heated confrontation on "The View," and they addressed the flareup at the start of the next episode.

Goldberg had asked McCain to stop talking over other panelists, and McCain threatened to sit out of the remaining discussions on the episode and has repeatedly claimed Goldberg was silencing her political viewpoint.

"We're just going to do a little cleanup before we do anything," Goldberg said at the start of the episode. "You know, things get heated on this show. You watch this show, you know this has happened over the years. We're really passionate, this is our jobs. We come in, we talk to each other. Sometimes we're not as polite as we could be, that's just the way it is, but you're going to be dealing with the same thing when you sit around your table with your family and you don't agree, or somebody says something and goes off the rails."

"This is part of what we do," she continued. "This is not an indication that women can't sit around and talk, this is not an indication that we don't know how to deal with each other on camera. This is happening in real time. Stuff happens on this show in real time, and everybody, you know, wherever you sit in all of this, don't assume that you -- that we're over here with little butcher knives under the table, you know. It just doesn't work that way."

"This is our gig, and sometimes it goes off the rails, and it does," Goldberg added. "So you can say that's never happened to any of y'all, that you've never had this happen, You understand where we're coming from, so everybody just calm down -- it's a TV show. We're on together for an hour and we step in poopy, okay? We step in poopy and stuff happens and everybody just calm down."

McCain asked to address the blowup, and she began by insisting she and Goldberg get along and love one another before scolding the audience for getting emotionally invested in the show.

"I've loved you for a long time," McCain said. "You were good friends with my dad. We fight like we're family. It's all good, we're not tearing the set apart. Calm down, all of you."

She then blamed the confrontation on the political divide, and complained about coverage of the blowup.

"I think it is a lens into what's happening politically in the country, and you and I spoke this morning, and I think that America is at very heated levels right now. I don't love it, I don't think anybody at home loves it, anyone in the country, but it is representative of what's going on in the country, and it's raw and real."

"We're passionate women," she added. "I'm hyper-conservative, everybody else at the table is not, and sometimes we're going to clash heads, but indicative of what the holidays are like for people, but we also came together and we're fine and everything is good, and I think the media blowing it up, I don't think it would happen with men, and there were a lot of commentators, Greta Van Susteren, in particular, talking about the coverage of us and how sexist the language always is, especially when the fights happen on this show, and I for one am over it."