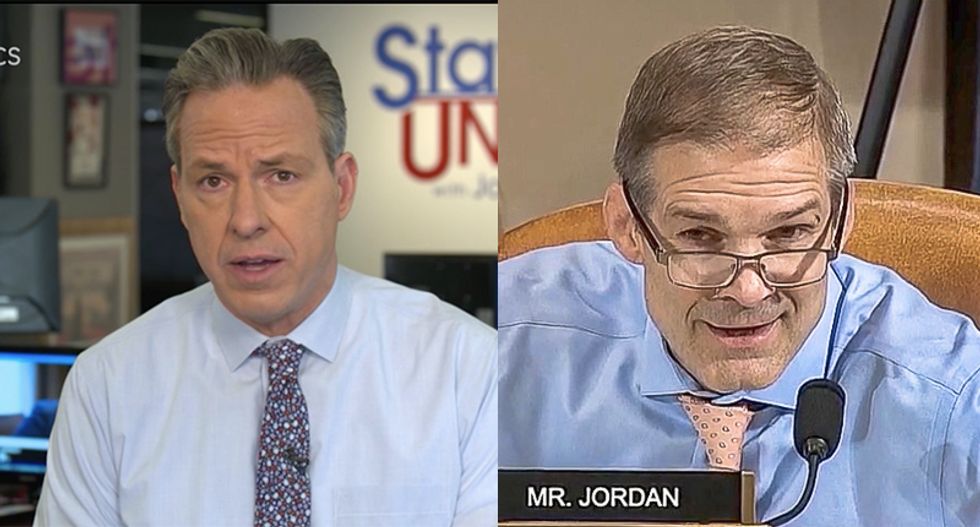 Host Jake Tapper did a special web fact-check for CNN.com where he looked line-by-line into Rep. Jim Jordan's (R-OH) claims about the impeachment proceedings.

He had four specific talking points that were disingenuous and outright false.

1. Jordan: "There was no quid pro quo in the transcript"

There absolutely was evidence in the summary of the transcript. Tapper began by explaining that Americans still haven't seen the full transcript or a recording of the July 25 phone call between President Donald Trump and Ukraine President Volodymyr Zelensky.

"If you read the summary of the transcript it clearly shows that after a discussion of U.S. military support for Ukraine, President Trump said the relationship is not 'reciprocal' and he asks Zelensky for 'a favor,'" Tapper said. "The favor? To investigate a conspiracy theory into the 2016 election and later in the call he says, 'one other thing,' he wants Ukraine to investigate former Vice President Joe Biden and his son Hunter."

Tapper noted that at the same time Democrats are alleging that Trump's team was running a pressure campaign is about far more than the single phone call on July 25. According to testimony, Ukraine knew as far back as May that their aid was being held up.

2. Jordan: The two guys on the call said, no pressure, no quid pro quo

Tapper explained that it isn't entirely believable that Zelensky would say that there was no extortion when he's the one being extorted and is so dependent on the military aid the United States agreed to deliver.

"Jordan's focus on what those two leaders are willing to say publicly ignores all of the other individuals who listened to that call and expressed concern privately," Tapper said.

3. Jordan: The Ukrainians didn't know at the time of the call that the aid was being held up

The claim is outright false. According to one Ukraine official, the government knew as far back as May that their aid was being held up. Tapper explained that Laura Cooper, the former Deputy Assistant Secretary of Defense for Russian, Ukrainian, and Eurasian affairs, testified that someone in her office got a question from a Ukraine contact about what the hold up was with the aid on the day of the call.

4. Jordan: Ukraine never started or announced it would start an investigation while the aid was paused.

That's another example of Jordan parsing his words. CNN international reporter Fareed Zakaria was contacted by Zelensky's team for an interview where it was known "corruption" would be discussed. It was there that Zelensky was going to officially announce the investigation into what Trump demanded.

"In addition to the various communications going on behind the scenes that we've heard about in testimony and we've seen evidence of in text messages, President Zelensky told President Trump in that July 25 phone call 'The next prosecutor general will be 100 percent my person, my candidate, who will be approved by the parliament and will start as a new prosecutor in September. He or she will look into the situation, specifically to the company that you mentioned in this issue.'"

You can see Tapper's full take in the video below: