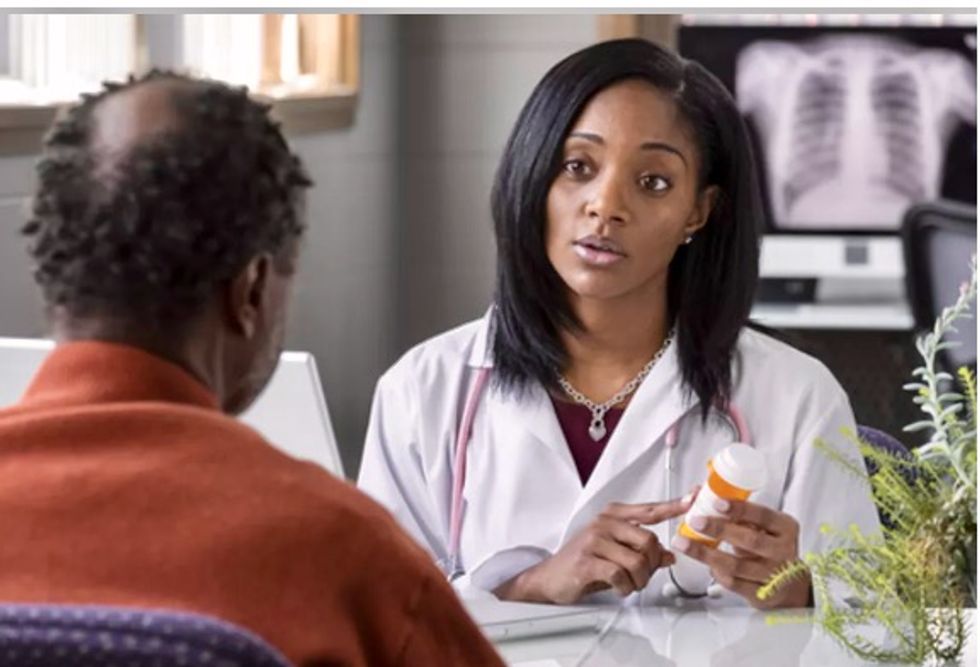 Doctors who receive money from drugmakers related to a specific drug prescribe that drug more heavily than doctors without such financial ties, a new ProPublica analysis found. The pattern is consistent for almost all of the most widely prescribed brand-name drugs in Medicare, including drugs that treat diabetes, asthma and more.

The financial interactions include payments for delivering promotional talks, consulting and receiving sponsored meals and travel.

The 50 drugs in our analysis include many popular and expensive ones. Thirty-eight of the drugs have yearly costs exceeding $1,000 per patient, and many topped the list that are most costly for the Medicare Part D drug program.

Take Linzess, a drug to treat irritable bowel syndrome and severe constipation. From 2014 to 2018, the drug’s makers, Allergan and Ironwood, spent nearly $29 million on payments to doctors related to Linzess, mostly for meals and promotional speaking fees.

Those findings were repeated for drug after drug. In 2016, doctors who received payments related to Myrbetriq, which treats overactive bladder, wrote 64% more prescriptions for the drug than those who did not. For Restasis, used to treat chronic dry eye, doctors who received payments wrote 141% more prescriptions. The pattern holds true for 46 of the 50 drugs.

On average, across all drugs, providers who received payments specifically tied to a drug prescribed it 58% more than providers who did not receive payments.

Other research, including our own, has found a correlation between payments and overall prescribing. This new analysis expands upon past work by looking individually at a variety of popular drugs. “What clearly jumps out is how consistent the association is across drugs,” said Aaron Mitchell, a medical oncologist at Memorial Sloan Kettering Cancer Center who has studied pharmaceutical payments for oncology drugs.

Holly Campbell, a spokeswoman for the Pharmaceutical Research and Manufacturers of America, an industry trade group, said it stands to reason that doctors who have interactions with a company about a drug may prescribe more of it “because they have more information about the appropriate uses for the products.”

Through spokespeople, Allergan (maker of Linzess as well as Alphagan P, Bystolic, Combigan, Lumigan, Namenda and Restasis), Janssen (maker of Invega, Invokana, Xarelto and Zytiga) and Novo Nordisk (maker of Levemir, Novolog and Victoza) described their interactions with physicians as important for sharing medical information.

Novo Nordisk added that prescribing data is not used to target physicians for speaking or other promotional interactions. Eli Lilly said in a statement that meals can take place in many contexts, including in doctors’ offices, at speaker events and at conferences, but didn’t answer other questions. GlaxoSmithKline, Ironwood, Astellas and Purdue declined to comment.

For some drugs that are household names, it was more common for prescribers to receive a payment than not to. More than half of doctors who prescribed Breo, an expensive asthma drug, to Medicare patients received payments involving the drug in 2016. This was also true for Invokana and Victoza, both of which are diabetes medications. For Linzess, nearly half of doctors who prescribed the drug had interactions with its maker.

More than one in five doctors who prescribed OxyContin under Medicare in 2016 had a promotional interaction with the drug’s manufacturer, Purdue Pharma. The company did not respond to a request for comment.

“If there are physicians out there that deny that there is a relationship, they are starting to look more and more like climate deniers in the face of the growing evidence,” said Aaron Kesselheim, a professor of medicine at Harvard Medical School and an expert in pharmaceutical costs and regulation. “The association is consistent across the different types of payments. It’s also consistent across numerous drug specialties and drug types, across multiple different fields of medicine. And for small and large payments. It’s a remarkably durable effect. No specialty is immune from this phenomenon.”

Huey Nguyen, a gastroenterologist in southern Indiana, increased his prescribing of Linzess in recent years. From 2013 to 2015, Nguyen’s Medicare patients had fewer than 60 claims per year for Linzess. In 2016 and 2017, that jumped to over 110 claims per year.

In total, Nguyen has earned $25,000 from 2014 to 2018 related to six drugs from four pharmaceutical companies, excluding meals. In 2018, he was paid by two companies to promote competing drugs that treat irritable bowel syndrome.

ProPublica’s analysis did not set out to examine, nor did it resolve, whether industry payments change doctors’ behavior, or if patients receive inferior care from doctors who receive payments. Many factors can influence doctors’ prescribing choices. Some patients, for instance, have conditions for which only brand-name treatments are available or for which other drugs have failed.

Nguyen said promotional speaking educates doctors about how a drug works, whether insurance covers it and when not to prescribe it.

“It’s a way for the primary care physicians to have access to a gastroenterologist where they can ask one-on-one questions,” Nguyen said. “I’m more educated towards the drug, because I have to be trained to speak on it, so I’m more comfortable prescribing it.”

Experts are skeptical that interactions between companies and doctors benefit patients. “If there really were innovations and real benefits that were accruing to patients for a new treatment, it shouldn’t take so much spending by the company to get the word out,” said Stacie B. Dusetzina, associate professor of health policy at Vanderbilt University Medical Center, who advised ProPublica on the design of its analysis. “I wonder if promotion is really to try to push products that have a much less substantial benefit because they’re not gaining the market share naturally.”

Nguyen said he takes many things into account when prescribing a drug, including its approved uses, cost and side effects. “In my day-to-day practice, my patients still come first,” Nguyen said. He said the speaking engagements do not influence his prescribing, “at least not consciously. Unconsciously, I don’t know.” He sees the public disclosure of industry payments to doctors as a way to help patients be active participants in their care.

Nguyen said he works with companies for the extra compensation but acknowledged that “it’s perfectly reasonable for people to question my motives.”

ProPublica’s analysis matched doctors’ prescribing in Medicare’s prescription drug program to the industry payments doctors received. Drug and medical device companies are required to report these payments annually through the federal Open Payments program, and they are made public on a government website. More than 600,000 doctors receive payments annually. (Companies also report research payments and ownership interests, but these were excluded from our analysis.)

Some providers were paid thousands of dollars, often for promotional speaking. But the typical doctor took in much less. Most only received meals, typically worth less than $100 per year.

In 2016, ProPublica found a relationship between the total dollar value of a doctor’s interactions with drug and device companies and the overall percentage of brand-name drugs he or she prescribed.

Other research has found correlations between industry interactions and prescribing for certain classes of drugs, includingopioids, urology drugs, oncologytreatments, inflammatory bowel disease treatments and heartburn medication. In one study, brand-name prescribing for certain classes of drugs was associated with receiving as little as a single pharmaceutical industry sponsored meal. A study of prostate cancer treatments did not find evidence of a connection.

Brand-name drugs are more expensive than generic options, both for patients and for Medicare. A recent report from the Department of Health and Human Services found that Medicare Part D and its beneficiaries could have saved almost $3 billion by switching from brand-name drugs to generics.

Linzess is an expensive drug, costing Medicare and patients an average of about $1,500 annually. A common alternative is the laxative Miralax, available over the counter as generic polyethylene glycol, which costs less than $200 annually if taken every day. Nguyen said he recommends Miralax to many patients, but that wouldn’t show up in Medicare’s data because Medicare doesn’t cover over-the-counter drugs. He said he often prescribes Linzess to patients who have tried Miralax and not seen the symptom relief they hoped for.

For brand-name drugs that have good generic alternatives, “every time a doctor prescribes one of these brand-name medications, it’s extra money transferred from the Medicare program to the manufacturer,” said Michael Barnett, assistant professor of health policy at Harvard T. H. Chan School of Public Health. “Medicare spending is out of control. And drug costs are one of the major reasons.”

Drug cost can have major consequences, not just for Medicare balance sheets but also for patients’ well-being. “The newest, latest drug is often not any better than the old drugs” that treat the same condition, Mitchell said. “But the new drugs are always more expensive. That really hurts patients’ pocketbooks. You’ve got physicians prescribing more expensive drugs and patients who aren’t taking them as a result. A generic medicine that’s cheaper that a patient does take is a whole lot more effective than an on-brand, expensive medicine that they don’t take.”