Even as 500,000 march in Madrid, Greta Thunberg warns climate movement has 'achieved nothing' until emissions fall 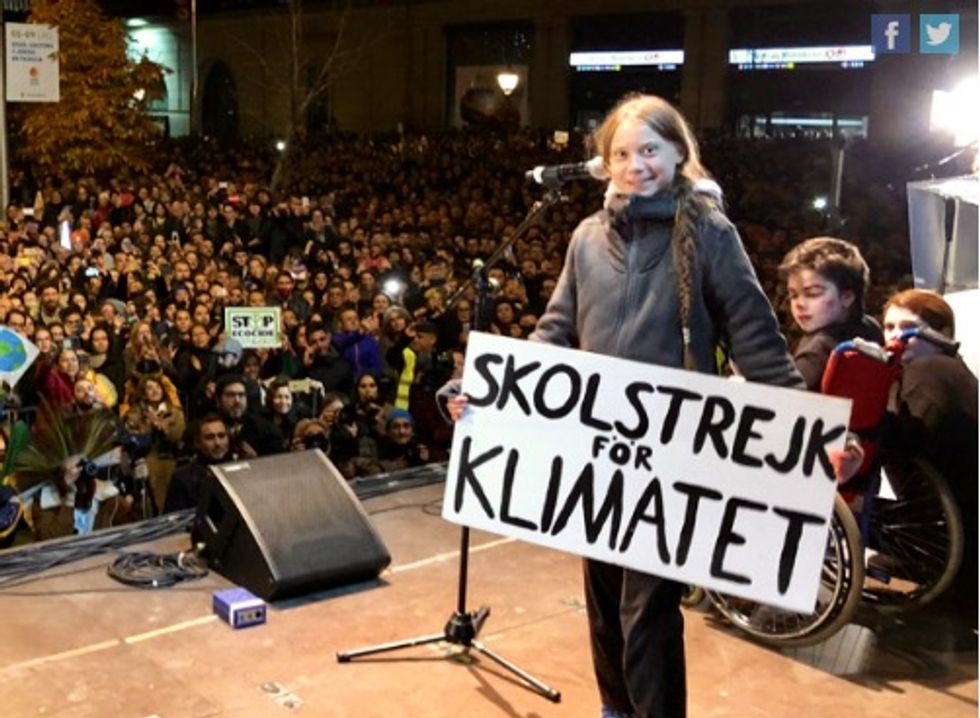 As Greta Thunberg and other activists spoke at a rally, an estimated 500,000 people took part in a climate justice protest in Madrid on Friday, December 6, 2019. (Photo: @GretaThunberg)

Before taking part in a 500,000-strong climate march in Madrid, teen activist Greta Thunberg spoke plainly yet forcefully Friday about the impact the global climate strike movement has had thus far and reiterated the demand of the climate justice movement for global leaders to act with the urgency the planet's ecological emergency mandates.

Speaking to reporters at the cultural center La Casa Encendida in Madrid, Spain—where COP 25 is underway—Thunberg called herself "just... a climate activist—a small part of a big movement" that needs even more activists to effect change.

"I sincerely hope that the COP 25 will lead to something concrete and that will lead to also an increase in awareness among people in general." She said she hopes that those in power "grasp the urgency of the climate crisis because right now it doesn't seem like they are."

As such, the global Fridays for Future movement will continue sounding the alarm, said Thunberg.

"I know that we will do everything we can to make sure that this is something that cannot be ignored anymore, that they cannot just hide away anymore," Thunberg said. Some world leaders "are afraid of change," she said, but the status quo must be disrupted.

"Some people want everything to continue like now, and change is what we young people are bringing. And that's why they are trying to silence us. But that is just proof that we are having an impact, that our voices are being heard," Thunberg said, and is the reason powerful opponents "try so desperately to silence us."

Thunberg suggested that COP 25 may be viewed "as a kind of middle year," with next year's COP 26 seen as "the big event."

"But we cannot afford middle years," the Swedish teen said. "We cannot afford more days going by without real action being taken." COP 25, said Thunberg, mustn't be brushed off "because every chance we get to improve the situation we must take."

Speaking more about the school strike for climate actions—which have drawn millions of young people to the streets worldwide—Thunberg said the model is simply not sustainable.

"We have been striking now for over a year and still, basically, nothing has happened," said Thunberg. "The climate crisis is still being ignored by those in power and we cannot go on like this. It is not a sustainable solution that children skip school."

The strikers, Thunberg said, "don't want to continue. We would love some action from the people in power... because people are suffering and dying from the climate and ecological emergency today and we cannot wait any longer."

A lot has been achieved, added Thunberg. "We have have raised public awareness and we have created opinion and that is a big step in the right direction. But of course it's nowhere near enough."

"The CO2 emissions aren't reducing. They are in fact increasing," Thunberg continued, "so of course there is no victory because the only thing we want to see is real action and real action has not been happening. So of course we have achieved a lot," she added, "but if you look at it from a certain point of view we have achieved nothing."

Thunberg and other climate activists brought their demand for climate justice to the streets of Madrid later on Friday, a protest Fridays for Future Germany said showed that "The climate justice movement is bigger and closer than ever."

In a tweet from the march and rally, Thunberg said the marchers may have numbered as many as half a million—a figure echoed by Greenpeace Germany.