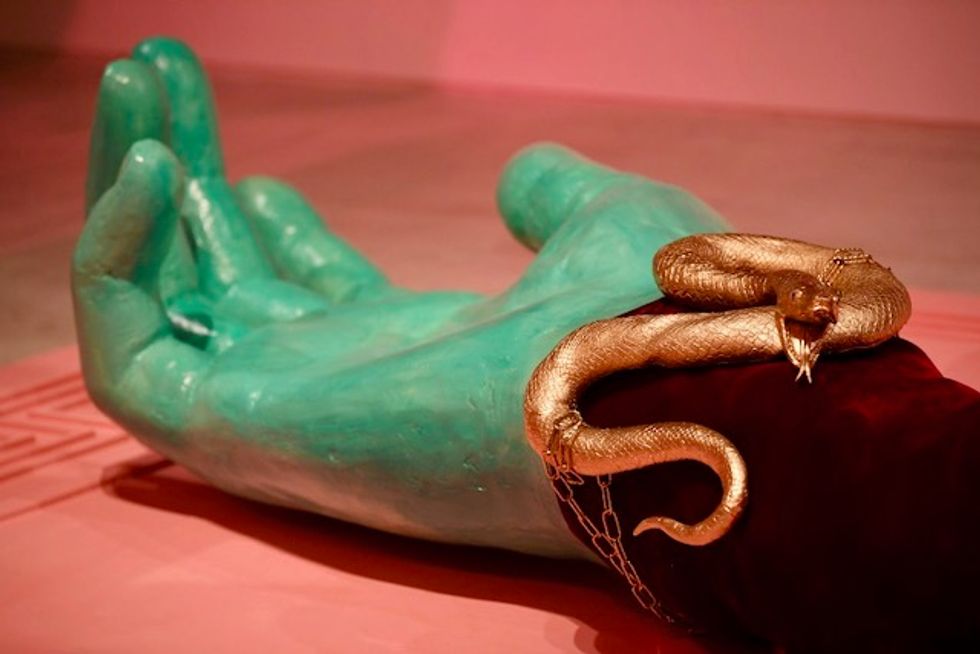 A section of an artwork entitled 'DC: Semiramis, 2019’ by Tai Shani, one of the four artists named winners of the prestigious Tuner Prize after they formed a collective to share the award after being shortlisted AFP/File / DANIEL LEAL-OLIVAS

This year's prestigious Turner Prize will be shared by all four shortlisted artists after they formed a collective to show solidarity at a time of global "political crisis", in a shock win announced Tuesday.

Oscar Murillo, Lawrence Abu Hamdan, Helen Cammock and Tai Shani were all named winners on Tuesday evening at a ceremony at the Turner Contemporary gallery in the seaside town of Margate, in southeast England.

Ahead of the announcement, the four had sent a plea to the judges explaining their reasons for forming the collective.

"At this time of political crisis in Britain and much of the world, when there is already so much that divides and isolates people and communities, we feel strongly motivated to use the occasion of the Prize to make a collective statement in the name of commonality, multiplicity and solidarity -– in art as in society," they wrote.

AFP/File / DANIEL LEAL-OLIVAS An artwork entitled 'Collective Conscience' by Colombian artist Oscar Murillo, who had been the favorite to win this year's prize

More than 60,000 people have already seen the works by the four shortlisted artists since they went on display at the gallery in Margate in September.

"We each work with specific issues, but it doesn't mean that we see those things in separation from each other," said Abu Hamdan.

"The condition of a competition would actually turn the messages away from each other."

Murillo had been the favorite to win. His work draws on his experiences of growing up in Colombia, before moving to London aged 11.

He combines his roots in Latin America with Western art, to create sculptures, models and vividly painted abstract canvasses for multimedia installations.

After the announcement, he said: "We have very strong individual voices, but somehow the prize needed to be concluded in this way."

Abu Hamdan, who is based in Beirut, bills himself a "private ear", rather than a "private eye" investigating and trying to analyse sounds and how they contribute to identity.

AFP/File / DANIEL LEAL-OLIVAS An artwork entitled ‘Collective Conscience' by Colombian artist Oscar Murillo, whose work draws on his experiences of growing up in Colombia, before moving to London aged 11

Part of his submission for the coveted prize involved recreating the acoustic memories of former inmates of a Syrian prison, where they were held shackled and blindfolded.

Cammock, who is based in London, is a multimedia artist working in film, photography and text, who uses social history to examine power structures.

Her film "The Long Note" examines the different roles and involvement of women in the civil rights movement in Northern Ireland in 1968.

She said the idea of forming a collective "literally came out of the first meeting with each other."

London-based Shani described her submission as an "expanded psychodelic" adaptation of Christine de Pizan's 15th work "The Book of the City of Ladies".

Her work, which was nearly five years in the making, features 12 imagined characters on film and live performance to explore feminism and power structures.

The coveted Turner Prize is named after the great British land and seascape painter JMW Turner and is designed to promote public interest in contemporary art.

The Margate gallery is built on the site of his lodging house, an image of which will feature on the new £20 note due out in February next year, alongside a depiction of the artist.

Controversy has often swirled around the Turner, which is awarded to a young British artist for an outstanding exhibition or other presentation of their work in past year.

In 2016, the shortlisted works included a giant gold sculpture of a pair of buttocks and chastity belts.

Other famous installations over the years include Tracey Emin's unmade bed, works made from elephant dung, clippings of human hair and a pile of bricks.

Last year's winner was video artist Charlotte Prodger, who shot a film on her iPhone about coming out as gay in rural Scotland.

Next year's prize will be awarded at Tate Britain gallery on the banks of the River Thames in London.