‘Giuliani did all the wrong things' on 9/11: Investigative reporter Wayne Barrett 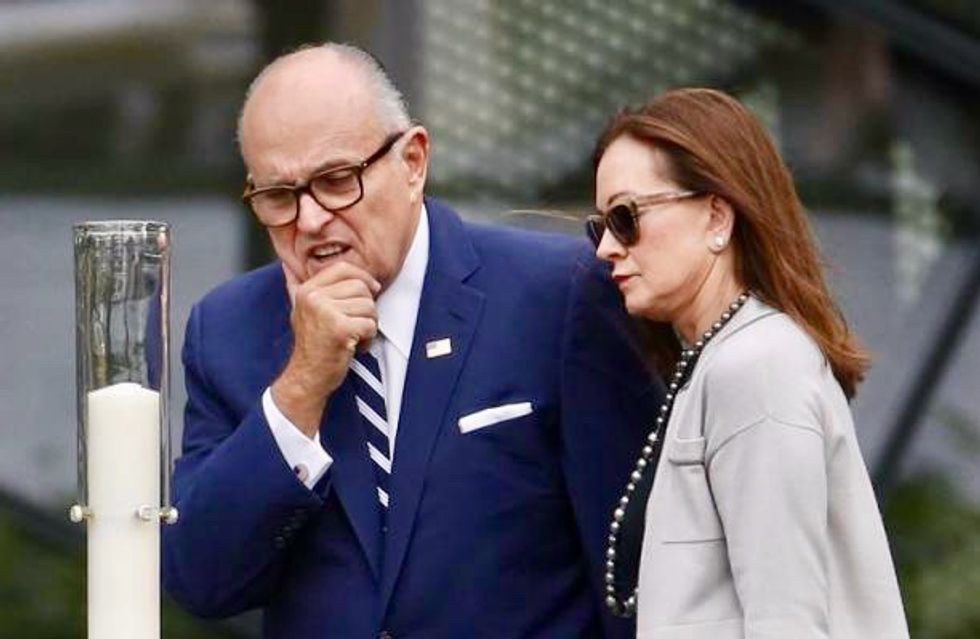 Janine Jackson interviewed the Village Voice’s Wayne Barrett about Rudy Giuliani and 9/11 for the August 17, 2007, episode of CounterSpin; that conversation was rebroadcast for the November 29, 2019, show. This is a lightly edited transcript.

Janine Jackson: “It was so well-orchestrated that you would have thought he had prepared for it forever.” That was how the secretary of former New York City Mayor Rudolph Giuliani described Giuliani’s performance on September 11, 2001. Certainly that has become media’s memory of the then-mayor on that horrible day—calm, focused, effective—and consequently much of the public’s memory as well. Once media get hold of a storyline, they tend to run with it, and by the end of 2001, Time magazine had it that “Giuliani’s performance ensures that he will be remembered as the greatest mayor in the city’s history.”

The troubling truth, according to a new book, is that the story that Giuliani has told, and that the press has repeated, about September 11 and his actions that day, doesn’t square with actual events. The book is called Grand Illusion: The Untold Story of Rudy Giuliani and 9/11. It’s co-authored by Wayne Barrett and Dan Collins. Wayne Barrett is senior editor at the Village Voice; he joins us now by telephone. Welcome to CounterSpin, Wayne Barrett.

Wayne Barrett: It’s so good to be here.

JJ: We’re talking about the historical record here. So what to you are the most significant differences between the Time magazine picture of Giuliani as “taking on half a dozen critical roles and performing each masterfully,” and the reality of his role on that day?

WB: Well, on that day, he said all the right things; I think he hit a chord with the American public generally, and of course, he was filling a void, because the president couldn’t be located. But he actually did all the wrong things on that day and in the lead-up to that day, in terms of preparing the city for any form of terrorist attack.

Remember, we were attacked once already in 1993, and it was a city that should have been ready, and should have understood the threat, particularly to the World Trade Center, since the terrorists said they were coming back.

So what he did wrong that day in particular was that he violated his own protocols, which it’s not just Wayne Barrett saying that. John Farmer, who was the head of the 9/11 Commission unit that worked on the chapter that dealt with the city’s response, I interviewed him, and he said that everything Giuliani did by splitting the command posts that day was in violation of his own command-and-control protocols.

What Giuliani did—and this story has been told a thousand times—is when he arrived in the vicinity of the World Trade Center complex, he met the police commissioner, Bernie Kerik, and with Bernie Kerik and almost the entire top-ranking uniformed officers of the police department, he walked over to West Street, on the far side of the towers, where the fire chiefs had set up their command posts.

It was, after all, a fire, so the fire chiefs are supposed to be in charge, and under any unified command system anywhere in the United States, the fire chiefs and the police chief should have been at the same command post, working together.

Instead, Giuliani spent about five minutes there, and then proceeded to leave and take the entire police brass with him, to another location on the far side of the towers, a safer location in the Barclay Building, an office building much further away from the towers.

And in the lead-up to 9/11, why were they even going to a command post? Why weren’t they going to the command center, which the city had spent up to $70 million creating and operating? And that’s because he put the command center in 7 World Trade, in the complex that had already been attacked, and it was vacated early in the day. So it was dysfunctional throughout the day, and that was a very costly error. Because there was no functioning command center, it heightened the importance of establishing a unified command, at this much more makeshift thing that occurs in all major events, this command post.

JJ: So let’s be clear: It’s not so much that what Giuliani did in the midst of this chaotic situation turned out to be a mistake. It really was that he didn’t follow existing rules on paper, about how something should be done.

WB: Rules that he himself created. Yes.

JJ: Now you indicate that Giuliani has never really been forced to explain, by reporters or anyone, this splitting-the-post decision. Did journalists just not want to sully the icon, or what’s going on there?

WB: Well, I don’t think anybody really examined it the way you can in a book. I know this is one of the best-covered news events of all time, but still, the National Institute of Standards and Technology did a 10,000-page study of the city’s response. It was a significant chapter in the 9/11 Commission Report. And both of them observed that there was a split command post, and that it was detrimental. But they didn’t hold anybody accountable for it: They never mentioned the mayor’s name, they never reviewed the circumstances that led up to that day. So that the media didn’t have some official body telling them how to figure this one out. And apparently they couldn’t figure it out themselves.

I mean, I quote everyone, including the current police commissioner, Ray Kelly, as saying that this was a violation of the protocols. No one else had ever asked them.

JJ: You’re kind of shifting, well, you’re very much shifting the memory, the public’s and the media’s memory, of a significant event. What kinds of responses are you getting from reporters, in particular, to this book?

WB: You know, the book is five years after the event. And it’s not just a focus on this kind of a mistake. Most of the book is really about the lead-up to 9/11, and all the mistakes that were made. And I think there’s a very receptive media audience to it in New York.

Nationally, there hasn’t been much of an audience for it yet. You know, the myth still is driving much of the anniversary spin about this event. As Giuliani emerges, more and more in time, as a presidential candidate, the national media may be more receptive to looking at the true facts, of not only what happened that day, but the failure to prepare for any form of a terrorist attack, that characterized the Giuliani administration for seven and a half years prior to 9/11.

JJ: Let me just ask you, finally, if you could characterize—media have had some time to cover follow-up, particularly here in New York, the environmental cleanup; it’s not like the story of September 11 is just what happened on that day. Do you feel that media are up to the task of really doing the first draft of history on this?

WB: There seems to be a fixation about the EPA and Christie Whitman and their role, which was certainly a culpable role, in the toxic aftermath of 9/11. But our book focuses very squarely on what we think is by far the more responsible party, and that is the city of New York.

Again, it’s ironic, because all of the media coverage in the aftermath of 9/11 stressed how Giuliani was the king of Ground Zero, that he ran it from top to bottom. That was at a time when everyone thought it was going so smoothly, that they were getting rid of the debris, they were clearing the site so fast.

Now, when everyone understands that this was a toxic nightmare, and an unnecessary toxic nightmare, especially after the first week or two, when it was clear that no rescues could be done—now no one seems to be saying, Giuliani was running that toxic nightmare, wasn’t he? Well, we certainly make the case that he was, that he made all the critical decisions.

Just as an example, we cite a letter on October 5, that the EPA wrote the city’s health department, saying, Nobody’s wearing a respirator down there. There are no cleanup stations for anybody to get rid of the toxins as they leave. This letter was completely ignored by the city. The city did nothing about it. Christie Whitman, whose agency is certainly responsible for misrepresenting the condition of the air generally there, although the city did its own tests, tests that were never made public , that we reveal in the book, 87 test results, most of them positive, that were never released, and never put up on any website or anything by the city. Christie Whitman actually once saw on CNN, in the dead of night, that none of the firefighters and none of the construction workers were wearing respirators, and got on the phone herself calling city agencies.

So Giuliani was running Ground Zero. And the toxic aftermath, it continues in the courts, will haunt his presidential prospects, because these suits are going forward, and the city’s culpability is becoming clearer every day in federal courts, not just involving the workers at Ground Zero, but the thousands of people who live down there, and Giuliani essentially said, “Clean your own apartments.”

JJ: That was reporter Wayne Barrett, speaking with CounterSpin in September 2006. Known as the first reporter to take Donald Trump seriously, describing him in 1979 as “a user of other users,” Barrett died the day before Trump’s inauguration in January 2017.