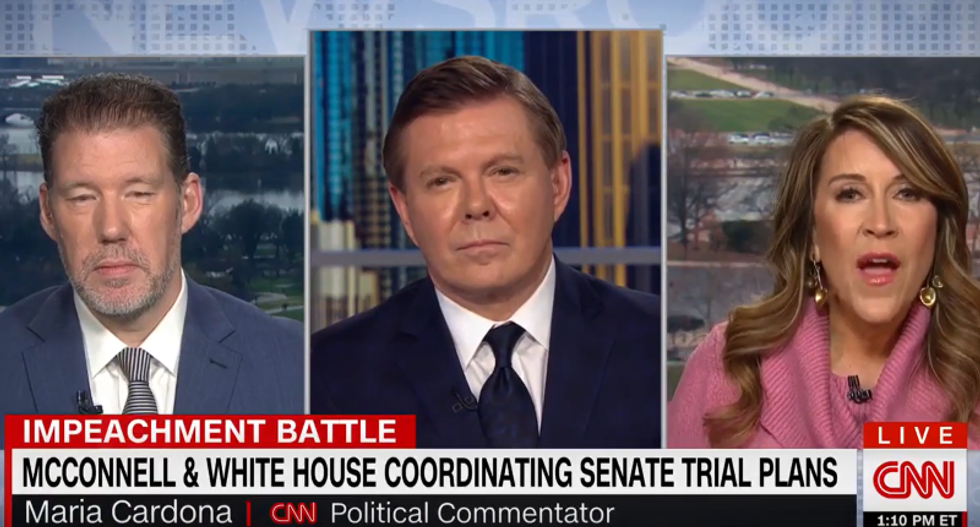 "We have to remember, this is not a trial as we think of trials in courtroom," said Heye. "This is a political process. It is designed to be a political process, and that's why this whole process is played out the way that it has so far. I would say to Maria, the Republicans aren't spending money to shore up Republicans per se. They're spending money to go after vulnerable Democrats who are going home and then coming back and telling Nancy Pelosi and Democratic leadership, I'm getting killed back home."

"Nancy Pelosi warned about this being a partisan process," continued Heye. "She said she didn't want it to be. It sure is going to be, and as the that's one of the reasons why censure is the better way to move forward."

"Doug, you're right. This is not a slam dunk by Democrats by any means," said Cardona. "Many Democrats are going to be very nervous and there may be some who will lose their seats over this. But there might not be. And what you see over and over again is that even those Democrats who are in districts that Trump won and that they took over in 2018, they are the same Democrats who came out to say to Nancy Pelosi, it's time. It is time to impeach this president because the overwhelming evidence and facts that this president put our national security at risk is more important than politics."

"And here's where I think that so many Democrats are proud of our own Democrats, and where I think the American people will also say, look, here you have leaders who are putting the self-interests of the country before their own political self-interest, because they are worried about this president and the damage he is doing long-term to the national security of the country and to our elections," continued Cardona fiercely. "It is bigger than just one seat in Congress. It is bigger than just the political viability of one person. And that is what Democrats are doing. They are putting their oaths of office in front of their own self-interest. That's something the president should try once in a while."