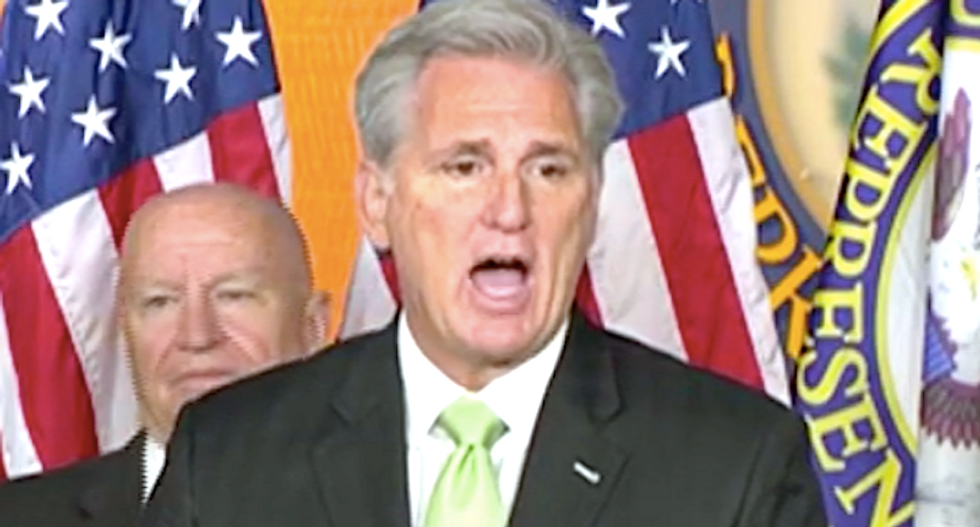 House Minority Leader Kevin McCarthy defended President Donald Trump from the articles of impeachment issued by Democrats, and he was roundly criticized for lying about the evidence.

The California Republican complained that the minority was not allowed to call witnesses during impeachment hearings, and then cited testimony from a GOP witness to defend the president.

"We watched in a hearing, a Democrat constitutional scholar that did not vote for President Trump say this was the weakest, the thinnest, the fastest impeachment in the history of America," McCarthy said. "He then went to say if there was an abuse it would be abuse on the Democrats to move forward. The speaker must not have listened to that hearing. If the speaker had only waited 48 hours to release the transcript, America would not be put through the nightmare."

McCarthy then misrepresented the findings of the Justice Department's inspector general, who found no evidence of bias or political motivation in the opening of the Russia probe, and insisted that Democrats wanted to undo the results of the 2016 election.

"Just because you created a timeline to impeach a president that you disliked, you ignored facts," he said. "We would never be here if they paid attention to the facts or the hearings. This is not a day that America will be proud about. It's not day that history will write that anybody wants to repeat."

"Alexander Hamilton warned us that this day would come," McCarthy added. "That a majority would use their political power just for politics, even though we all raise our hands to uphold the Constitution. I just hope no Congress, regardless who is in the majority, will ever take us down this path again, to waste a majority on this is an embarrassment to this Congress."