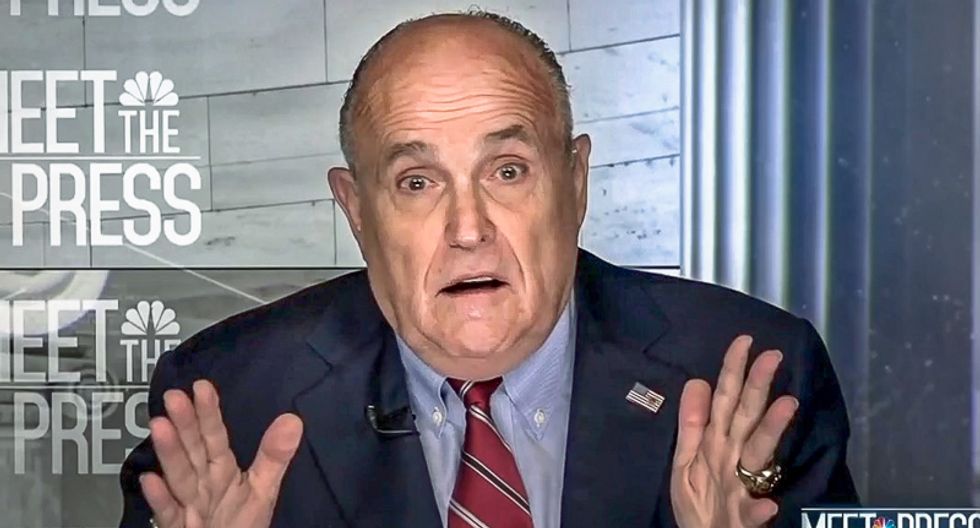 Here are five key moments from Giuliani’s interview with Nuzzi.

He said former ambassador Marie Yovanovitch, whom he calls Santa Maria Yovanovitch, is “controlled” by George Soros. “He put all four ambassadors there. And he’s employing the FBI agents.” I told him he sounded crazy, but he insisted he wasn’t.

“Don’t tell me I’m anti-Semitic if I oppose him,” he said. “Soros is hardly a Jew. I’m more of a Jew than Soros is. I probably know more about — he doesn’t go to church, he doesn’t go to religion — synagogue. He doesn’t belong to a synagogue, he doesn’t support Israel, he’s an enemy of Israel. He’s elected eight anarchist DA’s in the United States. He’s a horrible human being.”

This section of the interview elicited rapid outrage on social media.

“Giuliani arguing that he is ‘more of a Jew’ than a literal Holocaust survivor is the logical conclusion of Trumpist Jews’ argument that liberal and left wing Jews (the majority of American Jews!) are not really Jewish,” said the Atlantic’s Adam Serwer. “The ‘not really Jews’ argument is also a permission slip to engage in anti-semitism, since in their minds, It’s not really anti-semitism if the targets are not truly Jewish!”

“I hope to see [The Conference of Presidents, the Anti-Defamation League] and the major Jewish denominations & orgs swiftly condemn this revolting statement. Mr. Giuliani has no right to define who is a ‘real’ Jew, according to his own political preferences,” said national security analyst Tamara Cofman Wittes.

2. He admitted to having business interests in Ukraine.

“I’ve done two business deals in Ukraine. I’ve sought four or five others,” he said. Since he’s been representing the president, he said, he has been approached with two opportunities in Ukraine, both of which he turned down to avoid accusations of impropriety.

The scope of Giuliani’s interest in Ukraine outside of getting the country to investigate Vice President Joe Biden and the 2016 election on Trump’s behalf remains obscure, but his business ties to the region may be key.

3. Giuliani raged at the prosecutors in the Southern District of New York, who are said to be investigating him.

“If they are, they’re idiots,” he went on. “Then they really are a Trump-deranged bunch of silly New York liberals.” He added that he didn’t know for sure if he was being investigated at all, though subpoenas issued to Giuliani associates by the SDNY reportedly request documents and correspondence related to Giuliani, his firm, and, specifically, “any actual or potential payment” to or from Giuliani.

“If they think I committed a crime, they’re out of their minds,” he said. “I’ve been doing this for 50 years. I know how not to commit crimes. And if they think I’ve lost my integrity, maybe they’ve lost theirs in their insanity over hating Trump with some of the things they did that I never would’ve tolerated when I was U.S. Attorney.”

The idea that Giuliani’s knowledge of the law may save him is dubious. His previous comments about, for instance, Trump’s hush money payments to Stormy Daniels suggested he didn’t understand the nature of the possible charges against his clients.

4. Giuliani went on a baseless and outrageous rant about David Holmes, one of the witnesses in the House impeachment inquiry.

While speculating about possibly cross-examining witnesses as Trump’s defense attorney in a Senate trial, Giuliani floated completely spurious and desperate allegations against Holmes:

He had a few ideas for going after the credibility of witnesses. “The guy that overheard the telephone call,” for instance, “anybody check if the guy has an earpiece? Maybe he didn’t have it in. How old is he? How old is that guy?” There was a possibility that he was deaf, he said, and didn’t know what he heard. “How do we know he isn’t a paranoid schizophrenic?,” he said. “How do we know he isn’t an alcoholic?”

None of these accusations were based on anything and, for what it’s worth, Holmes’ key testimony about Trump’s comments went largely uncontested by Gordon Sondland, who had the conversation in question with Trump.

5. Giuliani completely undermined a key defense for Trump in the impeachment case.

He swore that although he doesn’t know whom he called, he knows he didn’t discuss anything improper with whoever it was. “Those calls — I can tell you what they don’t have to do with: They don’t have to do with military aid. I never discussed military aid with them. Never discussed military aid with anyone until it first appeared in the New York Times of late August of 2019. I had no idea we were withholding it, if we were.” He didn’t think it was such a big deal once he read about it, he said, because it was “typical Trump; he withholds aid till the last minute until he makes them beg for it.”

The idea that Trump was making Ukraine “beg for” the military aid is precisely what is so disturbing about the scandal, because it shows the president was using his office and congressionally approved funds to place pressure on the Ukrainian president while also asking for investigations of political opponents. Trump has previously claimed that “There was absolutely no pressure” on Ukraine. Giuliani — who, remember, is supposed to be Trump’s lawyer — says otherwise.