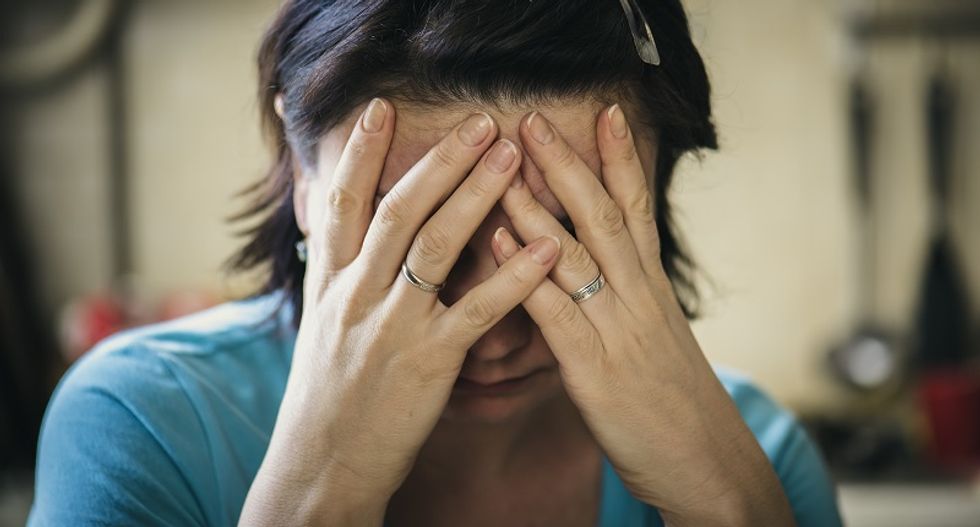 This article is the first in a series exploring gender and Christianity.

Jane* was a member of Australia’s evangelical Christian community, and throughout her marriage she heard many sermons on honouring a husband’s authority.

These sermons focused on a wife submitting to her husband’s authority in everything, from finances to where and when she worked. He was to be respected as head of the family, because this was “God’s plan”.

For three decades, Jane’s husband abused her under the guise of this notion of authority. He isolated her, denied her money and the use of a car. He yelled at her, kicked and punched her, told her she was mad and threatened to kill her.

Forceful and dominant: men with sexist ideas of masculinity are more likely to abuse women

Jane is a case study participant in my research, and she told me that when she went to her church leaders for support, they asked her what she was doing wrong. When she attempted to escape the abuse after the first decade of marriage, they told her to continue attending church with her husband.

Then, they told her to move back into the family home and resolve her marital issues, and that this would be the last time they gave her counselling on the matter.

Jane’s story is a familiar one – an ABC investigation last year showed how conservative Christian churches both enable and conceal domestic violence.

My ongoing research shows this is exacerbated by what’s taught in evangelical church communities, creating fertile ground for domestic violence, its justification and its concealment.

A literal reading of the Bible

Evangelical Christians believe biblical scripture is “truth” that “requires our unreserved submission in all areas of life”. They consider scripture to be “inspired by the Holy Spirit”, so “it is the supreme and final authority on all matters on which it speaks”.

The effect of evangelical Christianity on women’s vulnerability to domestic violence is yet to be measured through a comprehensive survey in Australia. But the extensive reporting on domestic violence in the evangelical Sydney Anglican Diocese challenges harmful and stubborn attitudes that place religious doctrine over the safety of women.

This resistance to cultural change is also shown by teachings on the permanence of the marriage covenant, another way women are potentially trapped in violent marriages.

A backlash against 1980s Christian feminism

In the 1980s, Christian feminists began to challenge the exclusivity of male leadership in the church, as well as aspects of theology, including the assumption God was masculine in nature.

The feminist movement that had been gaining momentum in wider society during the 1960s and 1970s underpinned this revolt against male privilege in the church.

In fervent response, evangelical factions of the Christian church began to double down on men’s authority over women.

Islam and feminism are not mutually exclusive, and faith can be an important liberator

In fact, evangelical Christian leaders who believed in the infallibility of biblical scripture, began to blame Christian feminists for creating more divorce, sexual abuse and promiscuity.

This backlash resulted in a renewed call for women to stop any resistance to their husband’s authority, a call still echoing almost 40 years later.

Traditional understandings about male headship, both in the family and the Church, were promoted as being ordained by God. This meant the authority of men and the subordination of women were considered to be “permanently binding” principles.

Conservative evangelical Christians enthusiastically embraced this as a form of resistance against the feminist movement, and still support these “permanently binding” principles today.

Sadly, there are no statistics on the prevalence of domestic violence in the Australian Christian community, but it’s addressed in international research. More Australian research is needed urgently.

In a survey of churchgoers in Cumbria, England, one in four respondents had experienced at least one of the nominated abusive behaviours - such as being kicked, punched, threatened with a weapon, isolated or sexually coerced - in their current relationship. And more than 40% of respondents had experienced at least one in a current or previous relationship.

The researchers noted evangelical churches were reluctant to participate in the survey, perhaps indicating the reluctance of these churches to address domestic violence in their own communities.

According to research carried out in North America, the rates of domestic violence in evangelical communities is considered to be at least as high as rates in other churches. But other US research conducted a few years later suggests the rate could be even higher in evangelical churches because they are more likely to create an environment endorsing gender inequality.

Considering gender inequality is a well-known driver of domestic violence and abuse, peddling women’s subordination as being ordained by God is placing the safety of conservative Christian women at risk.

The culture of male privilege in evangelical Christian communities can be changed with more women positioned as senior ministers. This move can disrupt notions that men have authority over women, and mean problems that affect women might no longer be overlooked.

Women priests could help the Catholic Church restore its integrity. It's time to embrace them

These communities can also benefit from more education to understand that violence, with visible injuries, isn’t the only form of domestic abuse. If church leaders and their congregations can recognise abuse in all its forms, they can take more appropriate steps to offer support to victims.

Most importantly, congregations benefit from hearing sermons that admonish domestic violence and advise victims to seek support and prioritise their safety, rather than sermons demanding women obey their husbands even in abusive circumstances. This would help stop Christian perpetrators using the Bible as an excuse for their behaviour.

When perpetrators use their Christian beliefs to justify abuse, women like Jane are not only facing long-term physical and mental harm, but they are being denied a spiritual journey that can bring peace and friendship within a like-minded community.

The National Sexual Assault, Family & Domestic Violence Counselling Line – 1800 RESPECT (1800 737 732) – is available 24 hours a day, seven days a week for any Australian who has experienced, or is at risk of, family and domestic violence and/or sexual assault.